This was a mammoth task to undertake: perhaps an adventure worthy of one of Nicolas Cage's heroic characters (either that or someone with far, far too much time on their hands). First, we separated the wheat from the chaff, so no animation voiceovers (bye bye Ant Bully, G-Force and Astro Boy) and no bit-parts or cameos (hasta la vista Grindhouse and Sonny). Then we dropped the Cage films that barely registered on the radar - any fans of Amos & Andrew or Guarding Tess should probably start writing to their MPs now. That left us with 39 of the finest Cage films to categorise, pre-Drive Angry.

Then, we considered the factors. Like most actors, Nicolas Cage has made his fair share of stinkers as well as some unforgettable classics, so the vertical axis would have to be based on quality. As for horizontal - my favourite axis - well, that's easy. Cage more than anyone has two distinct types of movie: serious, po-faced, issue movies and balls-out, crack-piped, bug-eyed brainwrongs. Then it was simply a case of plotting the graph, carrying the ones, and... 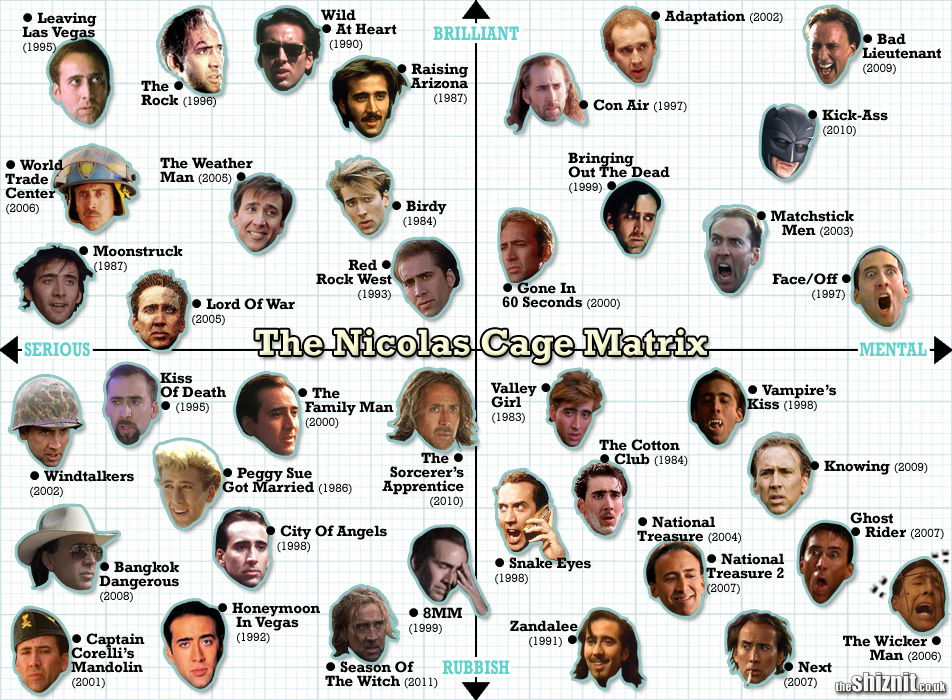 This pretty much speaks for itself. As you can see, Cage's career covers the full spectrum. The truly brilliant, madcap, mercurial Nicolas Cage from the likes of Bad Lieutenant and Kick-Ass doesn't come out to play nearly as often as straight-faced, paycheque-hunting, Season Of The Witch Nicolas Cage. That's not to say he doesn't try - just look at the films clogging up the rubbish/mental quadrant, freaking out the rest of the matrix. And look how smug The Weather Man is.

What have we learned from this? Not a lot, if I'm being honest. But it was fun to make.

If you enjoyed this article, please 'like' us below to vote for us in the Sky Movies Blog of the Year poll.

More:  Nicolas Cage  Top10
Follow us on Twitter @The_Shiznit for more fun features, film reviews and occasional commentary on what the best type of crisps are.
We are using Patreon to cover our hosting fees. So please consider chucking a few digital pennies our way by clicking on this link. Thanks!