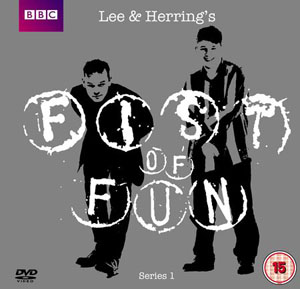 If, like me, you follow Richard Herring on Twitter and Stewart Lee in real life (restraining orders pending), you will know that they work very closely with DVD production company extraordinaire Go Faster Stripe and late last year they were able to release series one of Fist of Fun. I know, I was excited too. So excited, in fact, that it took me three months to compile a review.

Go Faster Stripe's dedication and attention to awesome detail has paid off in spades. Buckets of spades. The final product is too marvellous for me to describe without structure as this review would just descend into hyperbolic babble, so let's break it down into something manageable (and readable).

Listen to the man.
The show

We raved about the show last year, when rumours of a DVD release were rife. I don't want to regurgitate the whole thing, but for anyone who wasn't aware of Fist of Fun before now, it was a comedy show on BBC2 in the mid-90s starring Richard Herring and Stewart Lee.

Part sketch show, part alternative lifestyle show (not in that way), Fist of Fun was a popular 'youth' show which may have made our parents feel the way T4 presenters make us feel now. That is to say it was edgy, spunky and fresh - and not to say that Rich and Stew were abominable hipster twats.

The DVD has every originally aired episode of series one of Fist of Fun, and it has so much more than that!
The extras

There are commentaries from Richard and Stewart on every episode; they got together one afternoon in Rich's spare room to reminisce about their time in waistcoats when they lived in packing crates. Oh, to be a fly on the wall, which I suppose is unnecessary as Go Faster Stripe have been there and done that for us.

As well as Messrs Lee and Herring, there are commentaries from The Actor Kevin Eldon and Ben Moor (who is also An Actor, but is not The Actor) which is also nice, as I think Kevin Eldon is bloody hilarious even when he's just being himself.

There's also a full unaired pilot episode of the show which may not contain entirely NEW Lee and Herring material, but it is thrilling to see them doing things I've never seen before. It's like being catapulted back to my dad's living room, eating malt loaf and giggling hot chocolate out of my nose. (I had unusual habits.)

To juxtapose the never-before-seen Young L&H, there's a short film of them looking through a box of old memorabilia in the now which firmly plonks you back in a grown-up place where Rich is married, Stew has kids and I don't eat malt loaf anymore. It's still great to see them in a room together, and that will be true no matter how grey or rotund they get.
The super-extras

Okay, so people chatting over the jokes and extra footage is great and everything, but it's pretty bog-standard isn't it? I can hear you scoffing from here. Well, stick this Go Faster Stripe press release in your pipe and smoke it, naysayers.

"
"
We've done something that no one else has done before. We've got the studio rushes from some of the episodes. That's everything that was recorded on the night. So there's fluffed lines, warm-up men, deleted sketches and more. Most DVD makers would have edited this down - but we enjoyed watching them all the way through, so we thought you would too.

We have also included a mammoth set of files. There's scanned-in scripts - both filmed and unfilmed, an mp3 bootleg of a live show recorded in Treforest, press releases, fan club information, images of props - and there's some Word documents that Rich found on his computer. It's quite extraordinary - if we do say so ourselves.
You say so Go, and I say so, yo. You can actually watch the episodes as live, as though you were there in the studio, watching Peter Baynham (sadly missing from the DVD line-up) drink lumpy milk. Amazing, particularly when you realise that all this happened nearly 20 years ago.


The final sprinkling of comedic hundreds and thousands is in the discs and the packaging itself. There are teeny little Easter egg extras hidden all over the show, and you can find them by interactively interacting with the box and the individual discs. There's an essay on the box which talks you through the studio rushes, and the box itself is stylish and hardwearing - so all those times you take it off the shelf and put it back won't do much damage at all!

The BBC have such a habit of just losing archive material, that we as fans should be immensely grateful to the people who put in such a vast amount of time and effort to find this trove of comedy history and keep it preserved forever.

Thanks, Richard and Stewart, Peter and Kevin et al, and most of all, thank you Chris Evans of Go Faster Stripe. Different Chris Evans. Not the Captain America one either.

Weeds - Season Six DVD
The Almighty Johnsons - Series One DVD
Waterloo Road Reunited DVD
More:  DVD Weekly  Fist Of Fun  Stewart Lee  Richard Herring
Follow us on Twitter @The_Shiznit for more fun features, film reviews and occasional commentary on what the best type of crisps are.
We are using Patreon to cover our hosting fees. So please consider chucking a few digital pennies our way by clicking on this link. Thanks!