This is it. This is the one where the wheels finally came off. 11 movies deep into the Marvel's Cine-CHAT-ic Universe feature, Ant-Man marks the occasion where everyone has officially lost interest in the concept, due to us being five years and ten movies out of step with the rest of the Marvel Cinematic Universe. We didn't spoil the Endgame, the Endgame spoiled us.


Previous Marvel musings
Guardians Of The Galaxy (2014)
Captain America: The Winter Soldier (2014)
Thor: The Dark World (2013)
Iron Man 3 (2013)
The Avengers (2012)
Captain America: The First Avenger (2011)
Thor (2011)
Iron Man 2 (2010)
The Incredible Hulk (2008)
Iron Man (2008)
Ali: I have to be honest, hopes weren't exactly sky high for this one. Like most people I was really excited about Edgar Wright directing a Marvel movie, and I was upset when they parted ways because it seemed like such a perfect fit of style and tone. However, I really enjoyed it at the time as a palate cleanser after Age of Ultron, and I enjoyed it even more on re-watch, due to its smaller scale (no pun intended) and focus on character over spectacle. This feels like the first movie in Phase 2 where Marvel figured out that less is more.

Matt: A palate cleanser is the perfect way putting it. We got to the point with Avengers: Age Of Ultron where it was so packed full of entangled plot threads and characters, that it just feels right to have a 'reset' film and have some fun now. It works because it's such a simple idea - a guy who shrinks - and I like the fact that, in order to sell audiences on it, they cast Paul Rudd, which is probably the safest piece of casting Marvel ever did.

Ali: Oh yeah. Paul Rudd is absolutely perfect. It's a good measure of casting success to see if you can imagine anyone else playing that role, and there's just no separating the two in my mind. Just the right level of goof. 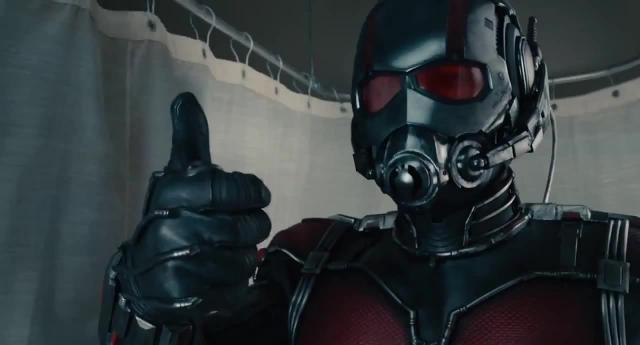 It's a thumbs up from this guy.


Matt: And it works - Paul Rudd is such a great, everyday superhero here, much more relatable than literally any of the other Avengers. In fact, that's exactly how he is sold, isn't it? When he says "I think our first move should be calling The Avengers" - that's perfect. He's just like we would be in that situation. It's great positioning for a new character at that point. I'd still be interested in knowing exactly what Edgar Wright was planning on doing with the film that led to him parting ways with Marvel, because in hindsight it's not like Baby Driver had a load of visually wacky stuff in it. It feels like he could have easily ended up with a film close to what Peyton Reed delivered.

Matt: Did I kill it, or have you just decided to remove me from these threads now?

Ed: I watched it about ten days ago. I'll have stuff to say. I've just, y'know, got a job and stuff.

Matt: It's always something with you, isn't it.

Becky: I can't really add any more to what you’ve already said. Likewise, my hopes weren't high after enduring Age of Ultron, but this was a refreshing restart. I would have liked to seen Wright's movie, but Reed brings the right amount of frothy and frivolity so I don't think the original would have been too far away from what we got. Reed and Wright's (and Joe Cornish's) styles blend together, so there are only a few instances where I thought, "That definitely came from Edgar Wright" - the Thomas the Tank engine bit, for example, which still remains the one of funniest things I've ever seen.

Ali: The Edgar Wright thing was tricky because there is obviously loads of him in it, and it's hard to say how it would have been different, or what Peyton Reed added, if anything. I can't think a last-minute hire like him ended up putting much of a mark on it. But the film doesn't suffer as a result, so why are we even talking about it? Because we're nerds, that's why. I always figured the scene where Ant-Man and Yellowjacket are in the suitcase falling out the helicopter and 'Disintegration' by The Cure comes on the iPod was one of his. That's a very Edgar Wright moment, to weave a song into a story in that way.

Becky: I guess for me, it has same issues that have cropped up before: a fairly weak villain and while we're told Evangeline Lilly is important she's still relegated to the sidelines.

Ali: It definitely suffers from not being an Ant-Man and the Wasp movie from the start. I get why they held Evangeline Lilly back for the sequel, but it doesn't help this movie's cause one bit. I remember someone saying at the time: if Evangeline Lilly is good enough to train Ant-Man, why can't she *be* Ant-Man?

Luke: I was hoping this would be a nice family film in the vein of Honey, I Shrunk The Kids, as it's such a weird concept that stands on its own well enough, but the bit where the bad guy shrinks the guy to a pulpy mulch is properly fucking terrifying. Gives Rudd free reign to do some swears, I suppose, and swearing is cool so. I still insist these films shouldn't be for kids.

Ali: Corey Stoll is a brilliant actor - seriously, possibly the most smarmy person in Hollywood - but he's a bit of a trite villain. I liked the angle where they claim the magic shrinking juice (or whatever) is making him go mad, but they could have made more of it - really cut loose. He's a bit Lord Business, isn't he?

Becky: Also - even in 2015 weren't people saving data to the cloud? Would blowing up a server farm make any difference? 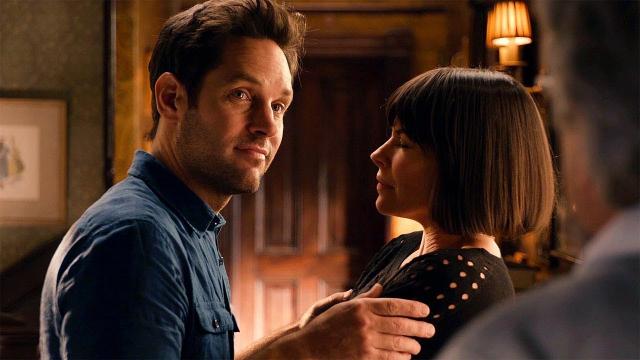 
Ed: This was the first one I saw after getting a bit bored by the whole thing that I just loved start to finish. Being largely self-contained and not having to pay lip service to all the magic stones stuff it can just get on with being a good film, which gives it loads of breathing room and came as such a relief.

Ali: I think now all the Marvel movies are all headed in roughly the same direction i.e. towards a big mega-balls-out blockbuster, it's quite nice when you have a little self-contained story like this - where the scale doesn't have to be quote-unquote 'epic'. I would like more interesting mid-budget Marvel movies please, Marvel please.

Ed: It means they can just do proper, uncomplicated character setup: guy loves his daughter, guy's a thief so he just got out of jail, wait so is he bad? No, he stole some secrets off a massive corporation so in Hollywood shorthand that means stealing is fine so he's good (despite Hollywood being a collection of massive corporations), etc etc. It's very basic, satisfying character redemption stuff, which is exactly what the franchise needed a dose of.

Luke: It's much funnier than I gave it credit for when I originally watched it though. Michael Douglas saying "Do you know how many ants there are, Scott?" cracks me up.

Ed: Rudd's such an interesting and left-field choice for it: even though he's essentially a comic actor he's also sooooo dreamy and it turns out he has proper abs when he takes his shirt off in a way that's 100% narratively justified. So you accept him as a hero but also that he's out of his depth and liable to fuck things up a bit.

Luke: And of course, Luis - Michael Peña is so great. Those little monologue bits are hilarious and really gave the film an extra boost. Actual original comedy motifs, which is rare enough these days. 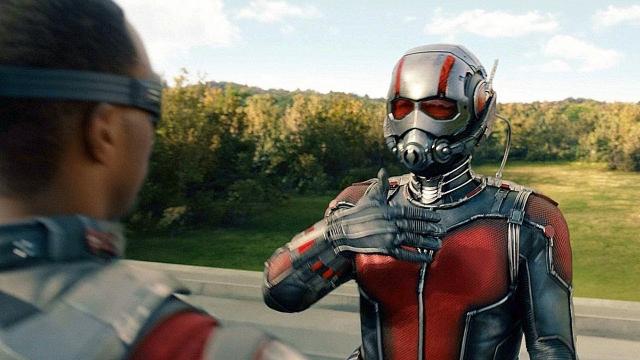 
Ed: I wasn't sure about the quantum realm bit, though. A transparent way of introducing jeopardy, a way for him to have to risk it all for his daughter. But moreover it all felt a bit magic and clashed with the otherwise science-based setup.

Luke: But again, like Guardians Of The Galaxy, it's going to tie in to Endgame in an essential way. As much as I'm not into these films as nerds like Matt, I'm so impressed by how they set the whole thing up. Must have taken years of pre-production. As an aside: at what point would they have bailed on the MCU if it looked like it wasn't going to be profitable?

Matt: I can help with that question. They put everything on the line to make Iron Man and Hulk (which, let's not forget, were two massive gambles on two risky less-popular characters). The story goes that they put up the remaining rights to their entire back catalogue of characters to get those two financed. If Iron Man flopped, the idea is that would have lost the right to make any more because the back catalogue would have been used as collateral for the financiers. That's as I understand it anyway, with some allowances for rumours/exaggeration over time.

Ali: I just saw Endgame and I no longer care to discuss the movie 'Ant-Man'.

Matt: Can we just skip straight ahead to that one? I want to discuss that one. I have things to say.

Ali: No, let's soldier on and discuss [deep sigh] 2015's Ant-Man. Only 10 more movies to go! Hang on: I'm going to try and attempt a segue to get us back on topic. By far the best fan theory I read about Avengers: Endgame was that Luis was going to provide a recap of the MCU to date to open the movie in his own inimitable way. The biggest disappointment for me was that didn't happen. I would pay good money to see it done somehow, because I dearly love little Luis. He's typical of Ant-Man, where secondary or even tertiary characters get their chance to shine in the spotlight.

Ed: I have not seen Endgame but have decided to take against it because it's popular. I bet Ant-Man is way better.

Becky: Yes, the cast is extremely likeable and Peña's character in particular is charismatic and goes beyond the typical Latino stereotype without the film over lauding it. Tip Harris is also very good. Even Stoll has his moments, even if his villain is a bit bland. It's a shame they didn’t do more with Judy Greer, though.

Becky: I have now also seen Endgame and all I want to talk about is HULK DADDY.


Marvel's Cine-CHAT-ic Universe will return... or will it? Probably not.

More:  Marvel  Cinechatic Universe  Ant-Man  Peyton Reed  Paul Rudd  Evangeline Lilly  Michael Douglas  Michael Pena  Corey Stoll
Follow us on Twitter @The_Shiznit for more fun features, film reviews and occasional commentary on what the best type of crisps are.
We are using Patreon to cover our hosting fees. So please consider chucking a few digital pennies our way by clicking on this link. Thanks!