Paramount Pictures and Skydance Entertainment hosted a packed hall at this weekend's Comic-Con convention in San Diego, where they formally apologised to fans for the cinematic abomination that was Terminator Genisys. "We're so sorry," Marketing VP Jerry Steinback told the assembled fans: "It's the worst thing we've ever done, and we made four Transformers movies."


The two-hour panel, titled Terminator Genisys: Holy Shit Did We Drop The Ball On This One, was attended by the movie's cast and crew, who each delivered a heartfelt apology for their part in the creation of the worst movie of the year. Director Alan Taylor threw himself on the mercy of the crowd and pleaded for forgiveness. "I know it was a piece of shit, I know, I know," he wept. "First Thor: The Dark World, now this. I just wish I could go back to being that guy who made a bunch of Game Of Thrones episodes."

Meanwhile, Terminator Genisys star Emilia Clarke allowed herself to be stripped naked and was paraded around the convention floor, followed by her PA ringing a little bell and shouting "Shame! Shame! Shame!" As Clarke walked the length of the queue for the fabled Hall H, nude and crying, the actress was pelted with urine and faeces from convention-goers unwilling to forfeit their place in the queue to go to the bathroom.

Also on the panel was Arnold Schwarzenegger, who appeared repentant. "I will not be back," Schwarzenegger said. "I know now why you cry."

"Da beauty of the first Chames Cameron sequel was da twist that my character, da T-800, was da good guy and not da bad guy," trembled the Austrian Oak. "We ran dat idea into the ground over anudder two movies. I should not be absolved for my part in this chumped-up choke of a sequel." As payback to disappointed fans, Schwarzenegger allowed the first 500 fans to the stage to wedgie him while saying 'I need your clothes, your boots and your motorcycle.' 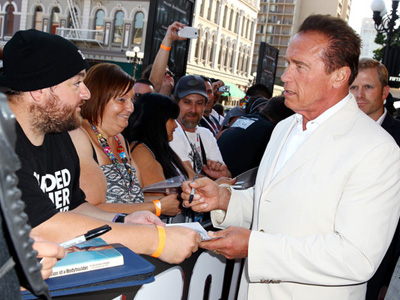 "Yeah, no, I don't want your goddamn autograph."


Jai Courtney, who allegedly starred in the movie, also sat in on the panel, although he appeared to be awkwardly reading his apology from the auto-cue. "I formally apologise to those of you disappointed with Terminator Geni-size," Courtney intoned, flatly. "The very fact that an actor of my calibre was supposed to be playing Kyle Reese, the same character once memorably played by badass Michael Bee-ine, was a secondary concern to myself and the filmmakers over how good I looked with my shirt off."

"Believe me, If I could go back in time and not make the movie, then I would," noted Courtney unconvincingly, before confirming that there were not currently any plans to explore this option.

Terminator creator and unofficial Genisys spokesperson James Cameron chose not to appear on the panel, instead opting to walk the Comic-Con floor, personally apologising to each and every fan in attendance. However, it later emerged he had an ulterior motive. "I wrangled it so that tickets to the apology panel technically count as ticket sales for Terminator Genisys," he was quoted as saying to an aide. "I don't get my commission cheque for my endorsement until this piece of shit hits 75 mill domestic."

Though the panel was a solemn, downbeat affair, in which Matt Smith was ritually sacrificed by Paramount executives as a peace offering, the afternoon did end on a high point with the sneak peek at forthcoming reboot, Terminator: Infinity, which was greeted with excessive whooping and riotous applause from the idiot bovines in attendance.

More:  Terminator Genisys  Terminator  Arnold Schwarzenegger  Jason Clarke  Emilia Clarke  Jai Courtney
Follow us on Twitter @The_Shiznit for more fun features, film reviews and occasional commentary on what the best type of crisps are.
We are using Patreon to cover our hosting fees. So please consider chucking a few digital pennies our way by clicking on this link. Thanks!