The 13 most incredible sentences from Wikipedia's plot synopsis of Transformers: Age Of Extinction

I am just a man. I don't claim to be perfect. So even when I stun strangers with my sick film trivia knowledge and straight up dunk on the critics with my professionally-honed reviewing skills, know that there are still gaps in my viewing history. I have never seen Citizen Kane, for example, possibly due to a highly comedic mixup where, for a good few years, I thought it was a sitcom starring Robert Lindsay. I have never seen a David Lynch film, principally because I think I hate him, but still. Never have I ever seen a Kristoff Kieslowski film. I don't even know if that's how you spell his name, and I didn't even bother to check. And so, I humbly admit to you, precious reader, that I have never seen Transformers: Age Of Extinction. For shame.


Taking of piss aside, I can't stay mad at the Transformers movies. They are the most transparent marketing exercises possible, featuring some of the most nonsensical storytelling I can remember, but as far as overblown screen candy goes, I could think of worse ways to waste my evenings. If you accept that Dumb is a legitimate genre and that action movies aimed at 12-year-old boys are the purest examples of the form, then Transformers movies should be right in your wheelhouse. In the Venn diagram of Cars, Robot, Aliens and Casual Misogyny, Transformers is owning that overlap. 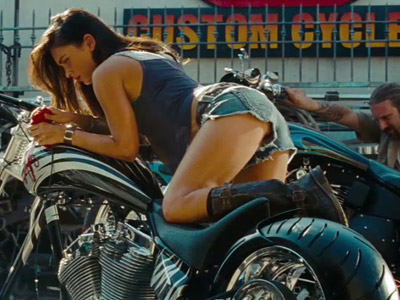 "Perfectly comfortable, thanks. Why do you ask?"


So yeah. Judge me not lest ye be judged and all that. I still stand by my original opinion on Transformers being a fun and exciting coming of age action romp, although the Spielbergian charm slowly drained out of the franchise the longer it went on. Somehow, however, I found myself busy the night that movie number four, Transformers: Age Of Extinction, was screened. Me! Busy! At a not-film! I'm off to see Transformers: The Last Knight on Tuesday and I can't bear the thought of being out of the loop - I might not get all the historical references to the rich Transformers lore! Netflix doesn't have it available to download and I'm rewatching The Wire in the evenings, so fuck it: shortcut required. Wikipedia me. Call me Sam Wit-wiki.

Here's the thing, though: reading the synopsis makes Transformers: Age Of Extinction sound as mad as a box of tits. I honestly had to check the page hadn't been vandalised by internet jokers. That really is the plot, huh? Sound. These lines are my absolute favourite bits from Wikipedia's plot synopsis. Here's the first line:

"
"
Sixty-five million years ago,
I'm going to stop you there, Transformers: Age Of Extinction, because I am already sold. I fucking LOVE it when straightforward action movies decide to provide complicated and convoluted backstories for no reason. You're about alien robot cars, just go with that! I thought it was dubious when the third movie retconned the Moon landing, then straight out the gate, Michael Bay is claiming ownership of the dinosaurs. Brilliant, keep going.

"
"
an alien race known as the 'Creators' used devices called Seeds to terraform planet a Earth, covering it with an alloy called Transformium
Everything seems to be in order here, please continue. I should add that Avatar didn't stay champ of making up ridiculous-sounding geological substances for long. Unobtanium, you just got Transformiumed.

"
"
Though the public believes that the Autobots were granted sanctuary, they are in fact hunted down by a rogue CIA black ops division, Cemetery Wind,
Parp. Carry on.

"
"
led by opportunistic government official Harold Attinger, who believes that all Transformers should be exterminated regardless of their faction.
Lots to unpack here. I feel like if the public really wanted to know what happened to the massive robot good guys who unfucked the planet and stopped it being humped by another giant robot planet, it would not be difficult for them to find out. And I don't know about you guys, but I'm getting the feeling that Harold Attinger is the bad guy.

"
"
Optimus, damaged in Mexico City and disguised as a rundown semi-truck,
They'll never think of looking for a truck!

"
"
is discovered by Cade Yeager, a financially struggling Texan inventor.
This is Mark Wahlberg, by the way, who somehow keeps getting cast in vocations he is clearly unsuited to. An inventor? All I can imagine Mark Wahlberg inventing is a beer helmet that also somehow holds a spare hotdog. Cade Yeager is one of the all-time great character names though. Cade Yeager. Blade Ranger. Jade Wanker. All good. 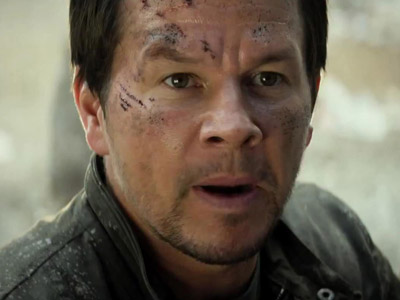 "Hello, my name is Cade Yeager, I am human and real, thanks"

"
"
Cade discovers the murdered Autobots are being melted down to make the Transformer drones.
Okay. Right. Maybe this one needs a bit more context that only the film can provide, because-

"
"
Joshua Joyce, the ambitious company CEO, is in league with Attinger to revolutionise global defences and improve human society using the Seed.
I mean, let's slow down a little and take stock, he's doing what now? That's-

"
"
The Autobots reveal to Cade that Galvatron is in fact Megatron reincarnated, plotting to use the Seed and the Transformer drones to conquer the world, starting with Hong Kong, as KSI plans to use the Seed in the remote Mongolian desert to create vast amounts of usable Transformium
CAN EVERYONE JUST CALM DOWN FOR ONE FUCKING SEC-

"
"
During the fight, Optimus wins the alliance of the Dinobots, who become essential to the Autobots' victory
Suddenly: Dinobots!

"
"
Lockdown returns to capture Optimus and the Dinobots, using a large magnet to cause destruction.
I think this one is my favourite.

More:  Transformers  Michael Bay  Mark Wahlberg
Follow us on Twitter @The_Shiznit for more fun features, film reviews and occasional commentary on what the best type of crisps are.
We are using Patreon to cover our hosting fees. So please consider chucking a few digital pennies our way by clicking on this link. Thanks!