Just when I thought it was on the brink, The Apprentice pulls itself from the wreckage of last week's Coach Trip disaster and delivers another doozy of an episode. I may just push back my trip to Dignitas for another week.

Lord Sugar assembles everyone to meet at HMS Belfast, but the task is not to star in an awful film with Rihanna, it's because it's a BATTLESHIP and so – it's Board Game week! Could he not find a giant mousetrap to greet them under?

Team Tenacity are still coasting on their success from last week, and Pub Quiz Impresario Danyewl quickly recognises that there needs to be a game behind any concept. Unfortunately that kind of sharp thinking isn't enough to get him elected as PM and so Pamela is thrust into the limelight.

Mark pitches a game that is essentially Dream Phone meets Tinder for millennials, which is quickly shot down when it's taken to a focus group of board game enthusiasts who, I'm sorry, look like their ideal game would involve furry cosplay and sexy wood-nymphs.

The enthusiasts don't like relationship games ("What is this thing you call love?"), but Pamela decides to press ahead with a battle of the sexes game, and Mark plays his "covering my back by mentioning the focus group over and over again" card.

Helmed by James, Team Summit are all over the place with game ideas; Solomon goes all existential and pitches a game based on Japanese Noh theatre, where subtle movements convey a wide range of complex emotions. It's for kids! They eventually decide on some bollocks that's "What number am I thinking of?" but with countries. It's taken to a focus group within a school where the students are a little bit racist: "Sushi comes from here." "China?" Tsk. 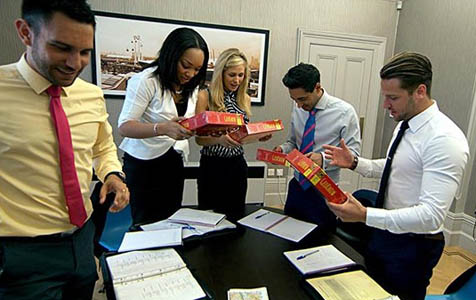 "Thanks for these Amstrad tablets you bought us, Lord Sugar. They run on what? 'Amdroid'? Right you are."


Back to Tenacity, Danyewl has been given the task of writing questions for The Relationship Guru, scrawling down gems such as "What is woman's favourite colour?" and "What woman buy when woman shop?" He's quick to admit he doesn't like their game and it becomes clear he's playing the dastardliest game of all – sabotage!

James goes into pitch and plays his own game of "Guess who's forgotten his price points", flogging 30 boxes for only a tenner. Coming out, he claims to have been screwed by Toys 'R' Us and we all hope that doesn't mean Geoffrey the Giraffe will be popping up on Newsnight.

Tenacity continue to flog the bleakest game ever, which should be renamed Grounds For Divorce. Mark invents the term "rocket surgeon" and Twitter falls apart. Bianca does an exclusivity deal for their geography game in trendy new London borough "Westminister", which is a moment that not only will change all of our lives forever, but also means we've reached another Apprentice sweet spot.

Before the figures are even announced, the knives come out and everyone starts stabbing everyone else in the back. James is in no mood to wait and can't wait to reveal Bianca's Westminister mistake, and Lord Sugar can barely express his glee at being able to use a Monopoly pun.

Sugar goes on to read out the sexist questions from Relationship Guru that sound increasingly like Danyewl pulled them straight out of the jokes page from a copy of The Sun from 1972.

Unsurprisingly, the less offensive GeoKnow wins and Team Summit's treat is to shoot penalties at David Seaman. Wait, what? Is that the treat? Screw the 250k, Lord Sugar, I'm sure the final winner will be satisfied by a game of hide and seek with Elton Welsby.

Anyway, James has survived another week and we're tantalisingly close to him being pulled apart and tossed away like a rag doll by Clyde in interview week.
Who got fired?

Pamela drags Danyewl and Bratz doll Lauren back into the boardroom and they inadvertently invent a new parlour game called "Let Me Finish". Lord Sugar appears to have a bit of a soft spot for Danyewl and he lives to lie another day. Pamela and Lauren whine for an absolute age until Sugar can take no more and Lauren is banished from the corporate household.

Next week, the lucky bastards are off to New York, where the trailer shows us that James exclaims, "The world is as big as our oyster!" How does this man exist? Even Dapper Laughs knew when to pull back.