The Apprentice: season 14, episode 5 recap: "A Load of Old Cobblers"

Sneakerfactory.net (the one-stop shop for all your shoe consultation needs) provides the basic steps into how to become a shoe designer; learn how to draw, go to a design school, get a shoe mentor, build a portfolio and read plenty of books. Or, just do it because a grumpy old millionaire has told you to do it in 24 hours, and oh, can you make the canapés for the launch event as well? What even is this any more?

Last week, Ed highlighted the ridiculousness that was booking the Albert Hall for a tenuous link to bodybuilding, so it makes sense that Lord Sugar summons the candidates to the Adelphi Theatre in London's West End to tell them they have to make women's shoes. It's an effective form of gaslighting, pretending that these crazy locations for task reveals aren't indicative of an entire format that is spiralling out of control.

Given that they are on their way to a theatre, you can forgive Kurran for finally thinking his ducks are in a row. He can, as he tells everyone in the taxi, "smell the theatre", and no matter what the task is, he will be 100% stepping up to PM on this one. He's a true leader, full of determination and ready to steer his team to victory until it's revealed they'll be designing women's shoes and then it's exit stage left, Kurran has left the building. Maybe it just didn't smell right.

Enter stage right Jackie, whose jaunty heels are proof that she's a shoo-in for PM. Her vision is for "urban graffiti" inspired shoes, emphatically supported by Rick, who's from Chorley and owns at least one Jurassic 5 album, helpfully explaining ghetto and gangster culture to everyone. This does not go down well with Kurran, who in spite of feeling he wasn't qualified for this task has plenty of opinions about it, feels that the concept is outdated. In this instance, "ghetto fabulous" means some urban photography on a sensible heel.

On the other team, swimsuit designer Sian steps into the fray but unfortunately she has the same amount of backbone as Tom and is easily swayed by the others pushing trainers over heels. According to Daniel, trainers are "revolutionary", but the design they come up with looks like something a four year old would rock with a tutu at a princesses party. 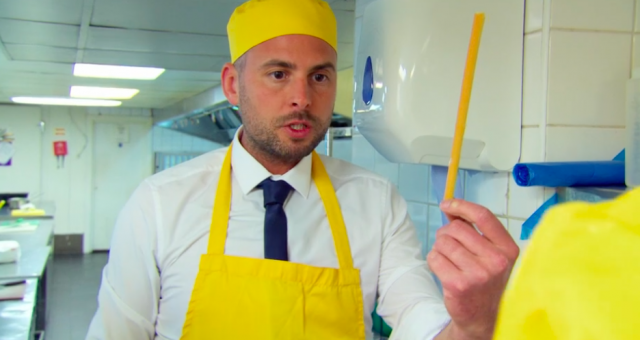 Moving on to the branding, it appears to be the thin end of the raffia espadrille for both teams. Kayode suggests "Fleekies" as a brand name, having to then explain to a confused Karren what "On fleek" means. Oh, Karren, it means....um, something to do with eyebrows? Jackie feels that her shoes are for going "Out Out", which actually isn't too bad and will work well with that Instagram Mum demographic who like to tell everyone when it's "Gin o'clock" and post pictures of themselves on rare nights out with their "girlies".

Feeling exhausted after coming up with the brand name "Nu Switch" for her toddler trabs, Sian delegates the task of coming up with a product to the sub-team, who haven't yet seen the pink pasty with a customisable bow. Khadija comes up with "Vibing 1.0", an idea she really should have saved for the sex toy design task (which Sugar will probably tell them about from the top of Mount Snowden).

In the end, no one really likes the designs they've come up with, which leads to some lacklustre pitches followed by some desperate selling. Team Typhoon sign a blood oath that they will stick to the agreed pricing structure, until Sian and Daniel stitch up the rest of the team within minutes and immediately drop their prices. At Collaborative, Jasmine questions the quality of Rick's canapes, because somehow this is also part of the task, leading to a tense situation in front of some prospective buyers with some not-so-passive aggressive swiping. And for reasons unknown, Jackie dresses as a minion, and Kayode opts to look like Big Bird's pimp. 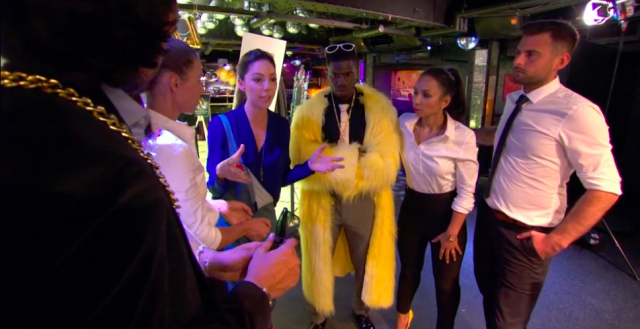 Apparently, disgusting trainers are all the rage as Team Typhoon win the task, their prize being Irish dancing lessons, the lucky bastards.

Jackie is full of quiet rage, having made the majority of sales and looks like she's ready to take the rest of her team out-out. She blames Kurran and Kayode for losing the task, but Sugar decides to take matters into his own hands and demands the entire sorry squad come back into the boardroom to get to the bottom of who did what.
Who got fired?

Sarah Ann FINALLY speaks, even if it is to argue about what happened last week, but her eyebrow piercing still unnerves me so I can't trust her. Jasmine and Kayode both escape being fired, probably because Claude would bite Alan's finger off if he so much gestured in his direction, and it's Rick who gets sent packing.
Does he thank him?

Next week, the candidates must make up for a decade of slapdash dental hygiene by frantically brushing their teeth before their appointment.

Additional observations:
- Daniel pronounces canapés as "canopies"
- Lord Sugar changes the way he says Kurran's name: Korrun, Korran, Karrel, Karren...
More:  The Apprentice  Alan Sugar  The Apprentice Recaps  The Apprentice Season 14 Recaps  BBC
Follow us on Twitter @The_Shiznit for more fun features, film reviews and occasional commentary on what the best type of crisps are.
We are using Patreon to cover our hosting fees. So please consider chucking a few digital pennies our way by clicking on this link. Thanks!