In a meta twist, the housemates, if they're called housemates, are appearing in a TV show in a TV show. It's a bit like the Larry Sanders Show, only with a big pink-lips inflatable sofa and the creeping sensation that all around you is decay.

To TV Centre in west London, which is by now an apartment complex custom-designed for wealthy Russians to kill prostitutes in, and the news that they're all going to sell stuff on the shopping channel, live, in like ten hours. I mean, fine: it's a very specific skill that people take years to hone, so shouldn't be a problem.

In the teams, Jackie stitches Tom up to be PM, and of course he falls for it because not to would be to admit that his is not a personality that belongs on TV, and after all he's only here because he wants to be on TV. He's had one side of his head shaved, probably having got the idea from one of those forums where gym guys complain about girls not putting out. Sian steps up for the other lot. Daniel wants to be a presenter, which is a good idea because it plays to his strengths; Tom also does, which is a bad idea because it plays to his weaknesses (talking; engaging with humans; appearing to be alive).

When they pick the stock to sell, Jackie reminds Camilla that Tom is going to be presenting so they should probably go low-end, which shouldn't be hard. They come away with some priceyish jewelry and some teeth-whitening kit, an absolute mainstay of any budget sale, despite the easily provable fact that it has never worked for anyone who has ever bought it. Wish I'd thought of it. Sian and Sabrina go for some hoop earrings worth over two grand, which is risky but Sian's insistent, and I admire her for it. It takes a lot of sand. 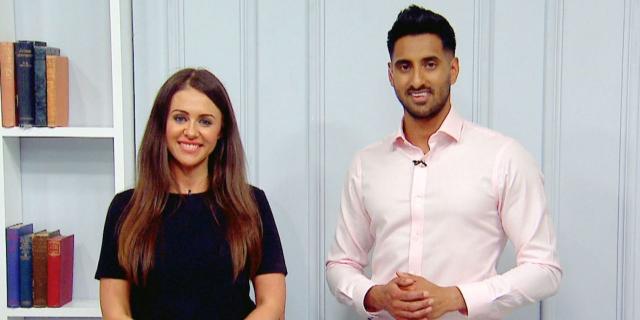 That cult video they unearth in the compound right after the suicide pact.


In the studio they rehearse under simulated conditions, which are that you've got instructions constantly being relayed in your ear and have to keep talking. This is actually quite an interesting insight. Why aren't I watching the Louis Theroux about shopping channels? Tom and Daniel are both crap at first, but anyone would be under these conditions.

The prospect of selling two bags' worth of gold earrings worries Daniel a bit: he points out, in his own way, that if he's buying something that expensive he wants to "feel loved" by going into a shop for it. I've never felt loved in a shop: they hate me in the Tesco Metro near work because I bring in three quid's worth of copper and silver every day and drop it all in the self-service machine to get the meal deal.

They have to shoot promo videos: Tom and Khadija's is good, using a simple idea of her going to the gym and doing her hair afterwards, playing up the product's benefits. Daniel and Sarah-Anne leave their floor-spin scrubber (mental note: definite ill-considered Sugar joke on this later) behind so can't shoot in the show home, leading to a rushed effort in the car park in which she wields it at the camera like a pugil stick and speaks insanely quickly. Given the constraints of having to shoot this in one take she does remarkably well, but it's still awful, and the production team tell them they can't use it.

Khadija's first contribution on-air is to say "shit", and it's all downhill from there. Tom is slightly better to start with, then he quickly finds his inner Easter Island head. In fairness to him, having "Demonstrate it Tom! Put it in your mouth!" shouted at him through an earpiece is a bit like being groomed via tannoy. He freezes up near the end but he does busk pretty well.

Sarah-Anne and Daniel are both good at it, doing passable impressions of the sort of breezy type you need to be to get this shit sold: he spiralises a courgette and they manage to sell one of the mega-earrings. Sian doesn't want to drop the price to try and secure more sales though, to which Sabrina takes exception, but let's face it, one was a bonus.

Sugar this week tweeted this sensitive and measured response to the suggestion that his dismissing Sabrina with the words "young lady" was sexist, demonstrating the off-the-cuff, unscripted wit for which he's been rightly lauded. 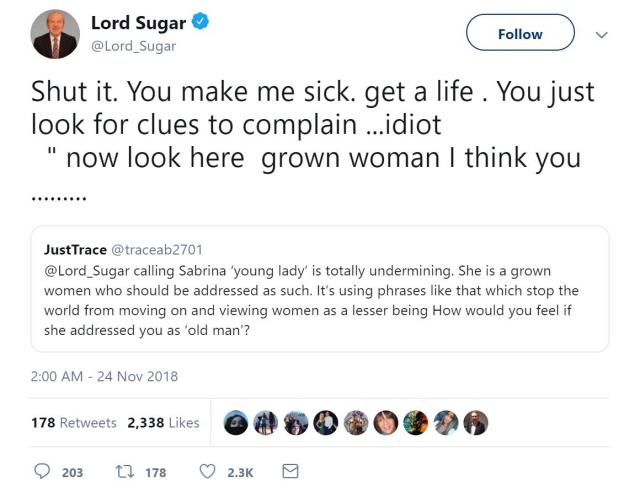 (A friend of mine told me on Friday he thought Sugar had "some good one-liners" and I got sincerely angry with him. He doesn't know what I have to go through.)

There's some arguing about Camilla switching up the roles she and Jackie were supposed to be performing at the last minute, and I don't know who's in the right, or maybe just refuse to devote energy towards figuring it out. There is, of course, a quick joke about a scrubber in a car park.

Typhoon (that's Sian's lot) win despite the lack of a promo advert and the earring sale being reneged upon, but they get to go to what Sugar calls "an exclusive screening", which is a Nomad Cinema setup of The Little Shop of Horrors (the 1960 one) in a bandstand with some prosecco. They've blown the budget on deer carcasses for Claude to gnaw on.

Tom is fired straight away for being transparently shit at everything, having been warned before that he was on his last legs. He fucks straight off, not even getting his pre-shot taxi interview because his new hairdo would spoil the continuity.

In the shame cafe Camilla points out that Jackie pushed for Tom to be PM and Khadija suggests back in the boardroom that Jackie is "playing a game". This is, of course, a game show, but this is an accusation so often levelled at opponents in reality TV contests. Iain Lee, about as genuine a soul as you could hope to put on a mainstream reality show, got this constantly off all the sportblokes he was lumbered with in the jungle last year. The accusation is of inauthenticity, and I suppose it must stem from how reality TV participation puts you in an isolated environment away from real life, and thus it becomes your reality, much like how cult members, deliberately cut off from their families, form attachments to their new life in the compound. The reality show situation is inauthentic, intended to encourage performance, and yet to accuse another participant of performing is a grave insult.

Anyway, Khadija gets the usual shit about how she has "an aggressive manner", which as ever is just a tendency to defend herself in plain terms when being attacked. Sugar says this, and so does Karren, and seconds later Claude raises Jackie's "aggression" as a positive trait.

Then Jackie gets fired because she's not an acorn or something.
Do they thank him?

Jackie gives a quick thanks, after Tom's earlier "Thank you Karren, Claude, Lord Sugar, for all your time", which is an esoteric spin on the genre.

Next week: the teams have to scroll through hundreds of Google search results for "android phone shut down at 40% battery fix" and find one fucking solution that doesn't involve buying a new one.