I don't own a bike, mainly because I'm not a massive wanker, but also because I believe that the rules of the road apply to everyone, unlike overweight marketing managers who think they're Bradley Wiggins and look like un-pricked sausages in the latest Team Sky kit, who scream at me when I dare to use a pedestrian crossing in the correct manner and slow down buses because they can't stay in one lane. But yeah, great, let's get more bikes on the road.

Lord Alan summons the candidates to the British Transport Museum. "Transport," he croaks, "is the lifeblood of a city. Blood is what gives us life. Life is what happens when you're busy making other plans. Fail to plan, plan to fail. A massive fail is when you fall off your bike. Bike rhymes with mic, which is short for microphone and is an electronic device. This week, you're making electric bikes. I'm off to start another race row."

The battle for Unison PM starts with wine connoisseur-cum-nuclear weapon enthusiast Lottie, who of course is also an expert on electric bikes. Her great-grandfather invented cycling and after she worked for the UK's best wine bar, spent 20 years at Britain's biggest electricity board, so why not let her have a go, apart from the fact she's incredibly hard to work with? Instead everyone votes for Biff Tannen/Thomas, inventor of Tommy the Turtle, and who has been on the losing side every week so far.

It's more straightforward for Team Empower, where Iasha has a background in electronic products and pitching them to companies, and her teammates gleefully think of the ways in which she will probably cock the task up as a result, because no one utilises their experience on The Apprentice.

To help build the concept of their e-bike, Iasha invents an imaginary customer/friend, "Sophisticated Sarah". Who is Sophisticated Sarah? She's fun, she's affluent, she might have a kid, she owns two Breton tops and is well acquainted with anything battery-operated. Hence why the team come up with the name Aphrodite – the Greek goddess of love and pleasure, with the slogan "Modern riding refined". If you're going for the older lady market, why not go the whole hog and call it "The Menstrual Cycle"? I am wasted here.

The second part of the task is to pick a secondary product to flog to retailers, the purpose of which appears to be so the contestants can make jokes about shiny helmets and to let the director frame lots of saucy shots with all the subtlety of a 1950s seaside postcard – look at the flashing dangly ballsacks, everyone! Aren't they fun and distracting from the fact this series is on the cycle path to nowhere? 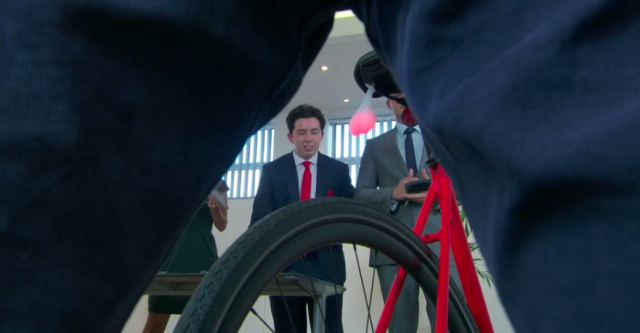 This is what your licence fee pays for


Over at Team Union, Thomas is going off-road with the design team's proposal of calling their bike "Boundaree", declaring it "pony" (when in actual fact, Marianne's concept of "push your boundaries, push yourself" kinda works). He decides to go with Scarlett's idea of naming it "E-Fit" instead, wondering why no one has used that name before. That's probably because e-fit is the acronym for the facial composites issued by police to catch criminals (Electronic Facial Identification Technique), but why bother doing any research when there's business to do and TV to make?

When it comes to the reveal of the bikes, no one is happy. Ryan-Mark doesn't feel like Aphrodite is elegant enough for the old dames he flogs Victoria Beckham dresses to at Harrods, and Tommy turns purple at the red rims Lottie and Riyonn came up with for their bike for crims.

You've probably heard by now, but Iasha's team smashed it, breaking all Apprentice records by taking £1.2 MILLION in sales. I know I'm no expert, but ... how? Clearly we all underestimated the influence of Sophisticated Sarah, who I like to think is a malevolent force manipulating Iasha to do her bidding, like an evil Ratatouille.
Who gets fired?

Thomas claims he could have designed a better bike, forgetting the fact that he was the one who came up with the abomination that was Tommy the Turtle last week. He brings back Lubna and subteam leader Marianne, who was responsible for the final design of the bike, although considering Tommy's brief was "make it the nuts" it was clearly open to interpretation.

In the end, it's Lubna who's told to get on her bike for contributing absolutely zip to the process.
Does she thank him?

A fairly breezy, "Thank you for the opportunity".

Next week, the candidates must figure out how to change the display on Lord Sugar's oven timer now that the clocks have gone back.

- SugarJoke: Lord Alan managed to get in "The Great British Bike Off", which is A+ and was going to be my original title.
- Why was Pamela inexplicably wearing a traffic cone at Empower's presentation? Doesn't she know that the dressing up box is a trap?
More:  The Apprentice  Alan Sugar  The Apprentice Recaps  The Apprentice Season 15 Recaps  BBC
Follow us on Twitter @The_Shiznit for more fun features, film reviews and occasional commentary on what the best type of crisps are.
We are using Patreon to cover our hosting fees. So please consider chucking a few digital pennies our way by clicking on this link. Thanks!