We're into the home straight and all of a sudden here's a task with an aspect that's quite interesting. It is of course juxtaposed by the task's other constituent parts, which are absurd and deliberately beyond the skillset of anyone involved, but you can't have everything.

To Maida Vale studios, where we are told they're all to sign an artist, remix their track and then secure licensing deals for it. The third of these is the bit that's potentially quite insightful, because it's a part of the music industry I and I suspect many viewers don't know a lot about. The second is, plainly, a task that should be carried out by, if not an expert, then at least someone who has a passing acquaintance with music production. They will then attempt to sell the songs for TV adverts, to people who somehow won't be put off by the information that the song has been remixed by people who have never before set foot in a recording studio.

Dean says something about Little Mix being his favourite band and Lottie mentions how she plays the viola, dabbles in piano and yet here's the twist: she enjoys the work of Kendrick Lamar. The woman constantly reveals new depths: she can move effortlessly from being unpleasant and cocksure in a yellow dress to being unpleasant and cocksure in a green one. 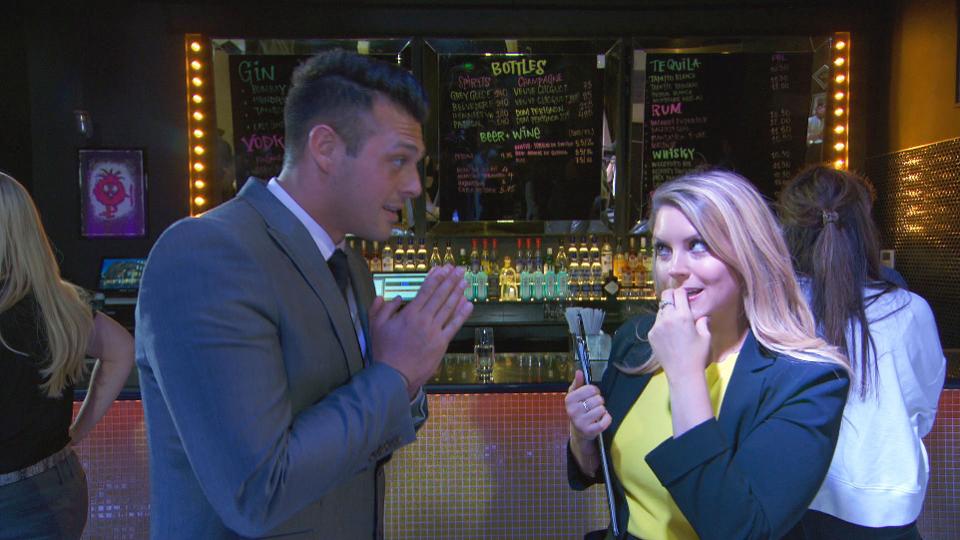 Lewis and the one still known only as "the Irish one" in my notes, recreating a "hot priest" scene from Fleabag in a desperate attempt to appeal to the hipster licensing punters.


When pitching to Lucozade, Carina asks whether the campaign is likely to "go down the urban route", and it's a path I hadn't considered. Lucozade The Wire? A taut, paranoid crime drama in which the illicit sale of sugar-rich sports drinks decays a community from the inside out, which can be read as an allegory for the collapse of American institutions? Or bring back John Barnes, visibly older and wearied by the desolate, post-industrial landscape around him, to volley the Isotonic bottle into the bin one last time with what little strength he can summon from his left foot, now withered and useless, when in its prime it would write symphonies and sonnets with every caress of laces on leather, and yet with a final swing, the magic still in there somewhere, it sends the bottle hurtling binwards as it did all those years ago, only to find the bin too full of dirty needles, the grey, withered corpses of babies abandoned to the elements by mothers lost to crack cocaine, rat skeletons cannibalised by their own kin, discarded plastic carcasses of tech products, ephemera, built to become obsolete, thrown away and landfilled yet indestructible, to lie there for a thousand years. It bounces off, tamely, as Barnes collapses to the floor to breathe his last.

Come to think of it, she might've just meant whether they want a rapper in it or not.

There is a joke about "the Sugar babes" at which no one by this stage has enough enthusiasm to raise more than a slight smirk. It's as well to remember that by this stage these people are physically and psychologically exhausted, having spent a couple of weeks now getting up at stupid o'clock to be shuttled to a remote island in the South Pacific to be told via video link that they're going to be baking and selling Cornish pasties so need to be in Truro in six hours, then encouraged to argue with and mistrust each other.

One of the songs repeated the line "I have to go" and there was some talk at some point of a toilet paper brand buying it for their adverts. "You could not make that up," Sugar says, delightedly, though someone very much did and got paid to.

The win goes to Dean's mob and they get a private performance from Bastille in the Radio 1 Live Lounge. I assume this is going to be as part of a larger audience, but no: awkwardly, it's just the five of them plus the band in a room that's too big for them all, and the band play with energy and introduce songs over the microphone and everything. We only see a minute or so of this, but I like to think it went on for 90 minutes with two encores.
Who gets fired?

Thomas is first out the door. Sugar tells him that he'd be happy to be in the trenches with him, but this is business, not a war, the sort of blithely expressed platitude whose exact opposite you can guarantee will be stated at some point before the end of the season. "Business is a bloody war," he'll say, and no one will call him on it, except me, but no one will listen, and quite rightly. Thomas accepts this with good humour, saying: "Thanks for the opportunity: I've really enjoyed myself", and you get the sense that, unlike more or less everyone who goes on The Apprentice, he has. He seems to have approached it as a laugh and a learning experience, not as a winner-takes-all bunfight. Good for him. He is, I think – whisper it – quite well adjusted, and the producers will be making notes to weed out contestants like him more effectively next year in favour of people motivated by a deep insecurity.

Then Marianne gets the boot too, and no one is shocked, because it's always a double firing around this time. Plus, frankly, we've all stopped caring.
Does she thank him?

A sotto voce thank you, and she's off. Next week: they all just have a race and it's over in five minutes and we all get a bit of our lives back.