As I think I may have previously mentioned, we hosted our very own screening of Swingers on Thursday last week, and now we'd like to tell you all about it, because this is our website and we can do whatever we want with it, so there.


Unlike our Fight Club night, which consisted of me running around like a dick all night, panicking about patch cables and faulty phone software and WiFi passwords, Swingers night was - fittingly - a lot more laid back and relaxed. I'd say it was chilled, but the giant windows in the upstairs bar of the Stratford Picturehouse magnified the rays from Earth's yellow sun tenfold, giving everyone who ventured out an impromtu sauna.

As promised, we had pre-film entertainment to enjoy. Luke pulled his old MegaDrive down from his attic and we set up NHL '96 for the punters to play on, a la Mikey, Trent and the Swingers boys. Here's me getting scored on by Luke, who went on to tell me he'd been practicing all week (but only after putting about eight goals past my goaltender). 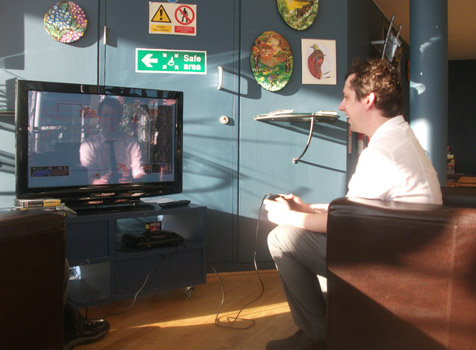 
Refreshments were served by the friendly Picturehouse bar staff and aided by film buff mixologist Neil aka The Incredible Suit, who knocked up a winning cocktail menu for the evening. I had all of the drinks on the menu except for the 'Money Martini' because it was far too much like a grown-up drink and didn't even have any fruit juice or Coke in it or anything. 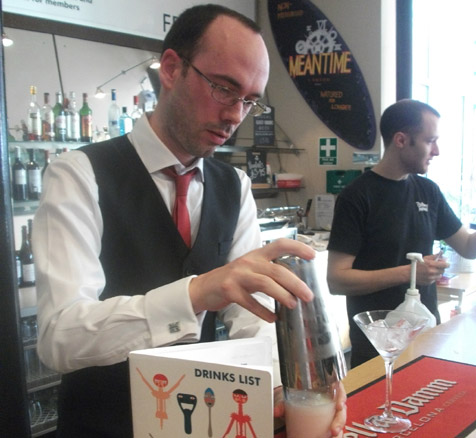 Here's Neil, not getting paid a penny and loving it.


Though I could have sat and played videogame ice hockey and drank cheap cocktails and slowly cooked in my own juices all night, we did have a film to watch, and I had an intro to read from none other than Swingers writer/star Jon Favreau. You may also know him as the director of Iron Man and/or Pete Becker, the Ultimate Fighting Champion wannabe and Monica's millionaire boyfriend from Friends. 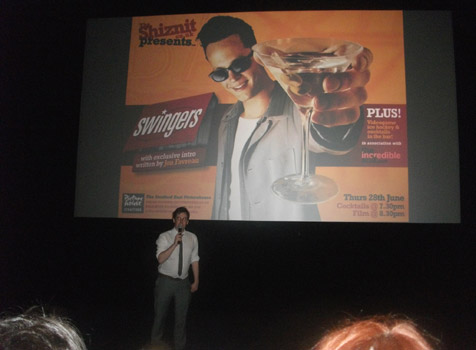 I sort of tried to channel both of those roles while reading it out.


I could scarcely believe the writer of the film we were about to show had written me an exclusive intro to read out, and as I said at the screening, I promise this isn't the kind of funny joke I usually tell (that almost always turn out to be painfully unfunny and just embarrassing). It's the real deal, and here it is in full, for the benefit of those who couldn't make it.

I am not usually inclined to write a message for the many screenings that there have been for Swingers over the years, but after Ali Gray conveyed the unique circumstances, I couldn't refuse the request.

"I cannot tell you how honored I am to know that you are all gathered in London to screen Swingers as the official kickoff to the 2012 Olympic Games. I'm sorry I could not be there, but I can imagine what it must be like to look out over the hundreds of thousands of you who have gathered to honor these magnificent athletes from across the globe. I can think of no better way to embody the spirit of competitive excellence than with a screening of Swingers. [light torch now]

"Truth be told, the fact that anyone still cares about a little movie that barely got made nearly twenty years ago is truly a testament to the American Dream. And by American, I mean the Colonies.

"Thank you for gathering to screen our film, and on behalf of all of those involved with making this movie, thank you for the applause and laughter over the years. This one is really special to me. I am grateful that it remains special to many of you as well. I wrote this screenplay during a very lonely time and now, through it, I feel connected to so many people around the world. Thank you for continuing that legacy tonight.

Sincerely
Jon Favreau"
With that heartfelt and sincere opening statement, Swingers began and swang harder than ever before. Not only is it a painfully accurate deconstruction of relationships (before Facebook 'relationship status' jokes were invented), Swingers is funny, sweet, genuine and really, really cool, without ever trying too hard. Even the now overused vernacular (fact: the "Vegas, baby!" buck stops here) works in context – the machine-gun patter of Thince Vaughn.

More:  The Shiznit Presents  Swingers  Doug Liman  Jon Favreau  Vince Vaughn  Events  Site News
Follow us on Twitter @The_Shiznit for more fun features, film reviews and occasional commentary on what the best type of crisps are.
We are using Patreon to cover our hosting fees. So please consider chucking a few digital pennies our way by clicking on this link. Thanks!