Why does The Guardian hate Tintin?

You may have already seen Steven Spielberg's new movie, The Adventures Of Tintin: The Secret Of The Unicorn. It's good, huh? Well, The Guardian couldn't disagree more: in fact, they've dedicated FOUR SIX separate op-ed pieces on why they disliked it so much. Protest much?


I totally get why Tintin is maybe not for everyone. The performance capture technology still isn't perfected and the animated style has put people off in the past, me included. As far as heroes go, Tintin verges on the bland, his quiff being the most stand-out thing about him. And sure, it's simply a procession of action sequences, which do tend to leave some of the more subtle kinks of Hergé's original character choking on CGI dust.

However, The Guardian disliked it. Really, really hated it. Hated it to the extent they commissioned four articles by four writers to vent on how horrible they thought it was. How is it possible that an otherwise brilliant paper like The Guardian can completely fail to see how a film like Tintin could be enjoyed by, say, the audience it was aimed towards? It's baffling. 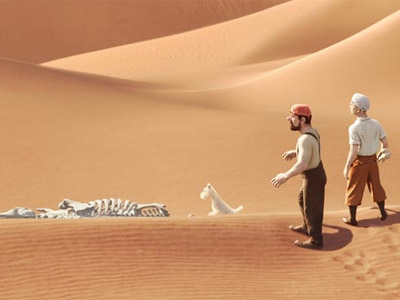 The first anti-Tintin article on The Guardian was the two-star review by writer Xan Brooks. I have absolutely no problem with him disliking it, but his negative review seemed pre-determined to hate on it - almost like it was written in advance. Check out his pretentious closing paragraph.

"
"
"Viewed from a distance, Tintin stands proud as freewheeling, high-spirited entertainment. But those close-ups are painful, a twist of the knife. There on the screen we see Hergé's old and cherished protagonists, raised like Lazarus and made to scamper anew. But the spark is gone, their eyes are dusty, and watching their antics is like partying with ghosts. Turn away; don't meet their gaze. When we stare into the void, the void stares back at us."
The fuck? This sounds very much like someone who was too busy trying to think up witty bon mots and devastating put-downs to actually try to enjoy it. Lazarus? Ghosts? Wha? It's also factually incorrect, referencing "the cobbled streets of Paris" (not in the film) and that it's adapted from Red Rackham's Treasure (the film ends before that book begins).

But hey, it's just one guy's opinion. Not everyone will feel this way, right? 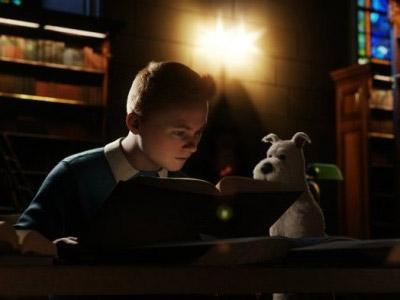 The next anti-Tintin rant, by Nicholas Lezard, is easily the most preposturous. Lezard starts his op-ed, titled 'How could they do this to Tintin?', by comparing watching Tintin to murder and sexual assault ("The sense of violation was so strong that it felt as though I had witnessed a rape"), yet it somehow defies the laws of logic to get worse.

It's an insanely over-analytical account of a movie that, in all honesty, is probably aimed at audiences a quarter of Lezard's age. Tintin is a classic literary creation, that's a given, and as a fan, Lezard has every right to feel aggrieved at Spielberg's take on the character, but there's something oddly over-dramatic about his piece. It's hard to take him too seriously when he calls the books "one of the consistently great works of art of the 20th century" and suggests that Tintin's feet always being on the bottom of Hergé's panels was a "subliminal stratum of plausibility" that Spielberg's work lacked. You can't win with some nerds.

Perhaps the most bizarre section of his article is the paragraph in which he lists the various instances of beds in the Tintin comics, and the lack of beds in the film. On and on he goes about the different occasions in which you see a bed across the different books (Actual quote: "Make your own list of the beds in Tintin. It's fun.")

"
"
"Tintin has a hospital-like bed in his flat at 26 Labrador Road... The Bird brothers may be nasty pieces of work, but they are considerate enough to provide Tintin with a nicely made-up set of sheets and blankets... Calculus has made himself a bed in a lifeboat in Red Rackham's Treasure."
Finally, Lezard reasons that Hergé subconsciously featured beds in his books because apparently his grandmother slept with her gardener. Of course. It's so obvious now! (*slaps forehead*) Why no beds, Spielberg? Why? And what's the deal with everyone wearing shoes? YOUR MOTHER SLEPT WITH A COBBLER, that's why. All of this has nothing to do with the film, of course. It's pure psychobabble.

Not only is Lezard's piece way out of touch, it misses the point by several thousand miles - that Tintin was written to be enjoyed by generation after generation, not just stuffy literature critics who feel it was written specifically for them and have the need to apply GCSE-level philosophy on books about a crime-solving boy and his dog. It's little surprise that Tintin doesn't rate well when assessed as an important work of art, as Lezard claims it is, but it's quite fun when viewed as, you know, a film. God knows what he made of The Smurfs. "The sense of violation was so strong, I felt like I had seen a nonce touching up a kid in a park."
The third Guardian article, written by Steve Rose, is the least objectionable, in so much as it focuses primarily on Tintin's use of performance-capture, and how it still resides in the 'uncanny valley'. I can't really complain too much about this piece, as it's pretty fair game, although it's quite naïve to think that animators will "never" successfully be able to animate a human digitally, given the heyuuuge advances in technology over the last 10 years alone. 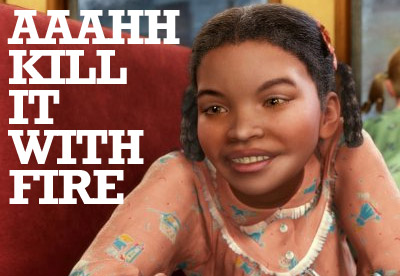 
I do take umbrage with the fact Rose uses Freud to try and prove his point, however. I think if Freud saw Steven Spielberg's The Adventures Of Tintin, he'd have done his fucking nut and gone out and bought all the Happy Meals. Prove me wrong, Steve! Still, that's three features on the same film, and still not one person willing to entertain the notion that the film might actually be considered fun by some people. 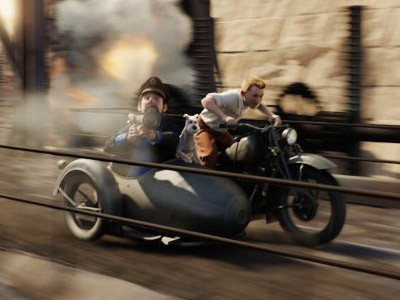 Finally, there's lovely old Peter Bradshaw, who joins the dissenting ranks with a paltry two-star review. Boo, Peter. Boo you. Unlike the other three anti-Tintin editorials, there's not the slightest hint of pretention here (Bradshaw even claims the only literary character he has any emotional attachment to is Biffa Bacon from Viz), but again, he bangs the drum marked 'performance-capture' for an entire paragraph – the fourth Guardian writer to do so in two weeks.

Not sure I understand this point, though:

"
"
" It's a relief to know that Spielberg is not going to film War Horse this way; no one thinks the Indiana Jones movies would have been better done like this."
No one is claiming performance capture is better than reality, Peter. As far as I know, Steven Spielberg has no plans to stop working with human beings in favour of finding pixels with daddy issues. Shooting Tintin in performance-capture is a perfectly rational and logical move – from one animated visual medium to another. If it came down to it, and audiences had to choose between a traditionally animated Tintin movie or an all-singing, all-dancing 3D extravaganza, I'm pretty sure the bells and whistles would win. The minimalistic charm of Hergé's artwork is delightful on the printed page, but Spielberg simply porting it direct to the big screen would be a disservice – and there'd be an outrage if he did.

Bradshaw's review is a moderately fair assessment, if a little too happy to back-slap his fellow haters, but at least he outlines what he dislikes and doesn't attempt to place Spielberg's work alongside Rembrant, Shakespeare and Mozart, or worse, compare it to rape. His closing sentence ("A disappointment") is just about the most succinct thing all four of the Guardian's writers have said about Spielberg's Tintin – two words that say more than four entire articles. That's the sort of over-egging of the pudding everyone is accusing Spielberg of, isn't it?
EDIT: Thanks to top Twitter types, I've been made aware of a FIFTH anti-Tintin piece on The Guardian, by writer Tom McCarthy. Guess what? He didn't like it either. Check out his closing paragraph, which shows a fundamental understanding of Spielberg's film and its appeal.

"
"
"Perhaps this movie will be studied, in years to come, as a Žižekian example of a dominant ideology's capacity to recuperate its own negation."
CRUSHED IT, TOM.
EDIT #2: Jesus Christ, guys. Six? Seriously?
Blimey. Poor Tintin. As far as character assassinations go, that's less Sonny Corleone and more the idiot hitman from Mulholland Drive. Did Spielberg turn down their press accreditation for the premiere or something?

The only logical conclusion is that Tintin is the linchpin in the phone hacking scandal and The Guardian will do anything they can to silence the Belgian boy reporter, lest he leaks the names of a few certain private investigators who have been paying off Thompson and Thomson. Great snakes! What secrets do you hold, Mr Rusbridger? 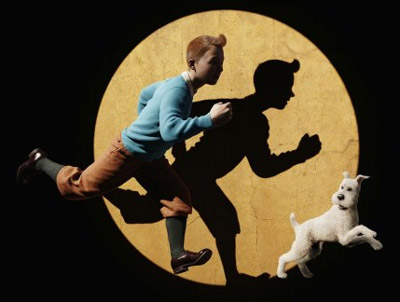 More:  The Adventures Of Tintin  Tintin  Steven Spielberg  Jamie Bell  Andy Serkis  Simon Pegg  Nick Frost  Daniel Craig  Toby Jones
Follow us on Twitter @The_Shiznit for more fun features, film reviews and occasional commentary on what the best type of crisps are.
We are using Patreon to cover our hosting fees. So please consider chucking a few digital pennies our way by clicking on this link. Thanks!