I see you, Tom Cruise. Trying to change your star persona, so carefully crafted over the years. Built on a winning smile and the confidence of kings, destroyed by the fact that you are insane and believe your body is full of spacemen, painstakingly reconstructed by your work ethic and the strategic leaking of set reports about what a great guy you are. But now you're getting on a bit, and it's getting less easy to watch you jump off helicopters without stifling a laugh.

The bloke still looks lovely, obviously. He always will. But that's why American Made, which is a great laugh if like me you're happy enough watching rise-and-fall tales of American hubris you've seen a few times before, miscasts him. 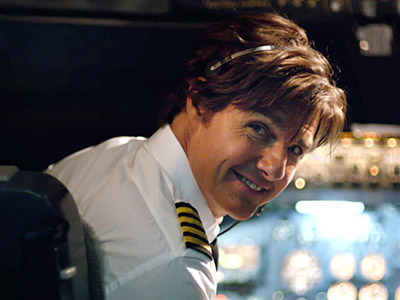 "Yeah, keep talking, blog boy. I'll have the fucking Sea Org on you."


We are presented with Barry Seal, a guy who's bored with his job flying planes for TWA and wants some excitement, so jumps at the chance to do some spy-plane photography for the CIA. All fine and dandy, until you consider that Barry Seal is an ordinary blue-collar shlub who looks exactly like Tom fucking Cruise. His wife (played by Sarah Wright, 20 years his junior) is beautiful, he's got a young son and his house looks pretty nice. Barry Seal is doing just fine, and so I don't buy his motivation for kicking off the events of the film in the first place. As good an actor as he is, Tom Cruise is awful at making you forget he's Tom Cruise.

It's not his fault. This is the problem with movie stars. The more successful they are, the more they carry with them a sense of who they are beyond the character they're playing. With male stars, this mainly comes down to a sense of whether or not they are vulnerable. Cruise, Pitt, Washington: not vulnerable, never in over their heads; if they come up against some shit they're going to deal with it, and look generally unruffled throughout. Damon, DiCaprio, Cooper: all vulnerable, might have a bit of a wobble before ultimately sorting it all out. 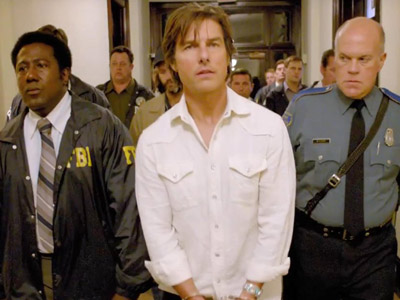 Weird setup for a Persil advert.


The thing is, though: he's still great in this. Even though he flaws the whole premise, he doesn't half make it fun. It's the same quick-cut, "older and wiser narrator"-led stuff you got in Blow, and Goodfellas, and Pain & Gain, and where you briefly forget how wrong he is for the role is in the scenes where it's all going great, the coke's flooding the streets and life's a big cocktail party. Here and now he makes sense: charismatic, funny (for a man who never, ever says anything funny in interviews, just laughs a lot at other people's jokes and thus gives the impression of being More Fun Than You'd Expect, he is surprisingly capable of being funny on screen) and great at wearing a shirt.

But the other point is that Barry Seal's an anti-hero. Cruise is always on the side of good in his roles, you guess partly to counterbalance negative public perceptions. It's odd that he's here being a guy you cheer for his audacity while he flies kilos of coke from South America for John Belushi to shove up his beak. It doesn't quite fit somehow.

So I wonder what the point is in Tom Cruise now. Bit old to be an action hero, or at least can't have more than a couple of Missions Impossible left in him, but still gives off too much of an air of confidence to persuade as an ordinary guy who struck it lucky. I'm not sure how his next ten years will look, but they'll mark the decline of one of the last true movie stars, and they'll be fascinating to watch.

More:  American Made  Doug Liman  Tom Cruise  Sarah Wright  Domhnall Gleeson  Caleb Landry Jones  Jesse Plemons
Follow us on Twitter @The_Shiznit for more fun features, film reviews and occasional commentary on what the best type of crisps are.
We are using Patreon to cover our hosting fees. So please consider chucking a few digital pennies our way by clicking on this link. Thanks!