More than any of its other movies to date, it seems that Marvel has been really savvy with this film. After all, it has completely turned around our expectations. Remember when we were outraged at Edgar Wright leaving due to “creative differences”? Remember when we sharpened our caps-lock ready for whatever half-assed generic borefest followed? Slowly, but surely, Marvel have won us all over with some neat trailers, some fun marketing and the sheer force of Paul Rudd’s lovable charisma. If that wasn't proof enough that Marvel just know exactly what the fuck they are doing with what they have, the finished movie also happens be rather ace. And that is no small achievement.


One of the biggest compliments that can be given to this movie is that it really feels set apart from the rest of the MCU. It's quirky, consistently fast-paced and it actually follows a slightly different template to its Avengery predecessors. Sure, there’s a lengthy cameo from a newly-familiar face halfway through, and there’s a couple of references that anchor Ant-Man firmly in the age of post-Ultron, but otherwise this is a film that stands on its own six legs.

As origin tales go, it is remarkably laid back. Rudd's Scott Lang is a former thief who gets caught up in an elaborately planned heist by Michael Douglas’ Hank Pym. The stakes feel relatively low and the plot focuses at great length on Lang being primed for his mission, practising with Pym’s special shrinking suit and learning to collaborate with ants using special insect-tech. Throughout it all, we see an amusing mentor-student relationship develop, action skips along via a lengthy, entertaining montage and at every turn the film makes it clear that – don’t worry – it isn’t taking any of this seriously either. It all adds up to a film that is just so much brilliant funtimes. 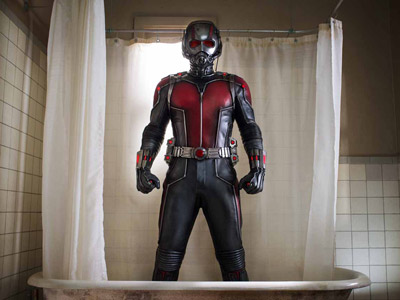 I've had sex fantasies that start exactly like this.


Crucially, Paul Rudd never overplays the comedy chops at his disposal, getting laughs out of deadpan expressions rather than riotous gurning, making him a believable hero, albeit an unlikely one. In fact, it’s Rudd’s otherwise unsuitability to this kind of role that makes Scott Lang so interesting – if his casting could ever have been considered a risk, it pays off big time.

It’s actually Michael Peña who goes for all-out laughs in his comedy sidekick role as Lang’s inappropriately cheerful best friend, but the biggest belly-wobblers come from frivolous action moments. Thankfully director Peyton Reed doesn’t rely too much on the clearly popular ‘cutting away from miniaturised epic action to reveal actual-sized non-consequence’ trick (see: the toppling toy train in the trailer), but between some things shrinking and other things getting bigger, there are some clear stand-out instances of hilarity that puncture the tension of the equally impressive and inventive fight sequences.

This isn’t the only area in which Reed proves himself a worthy successor to Edgar Wright’s hard work. A nifty visual gag shown whenever Peña’s character regales an anecdote is particularly inspired and the incredible effects used at the start of the film that turn back decades on Michael Douglas’ face is astonishing, but, in particular, a last act trip through a quasi-dimension realm is so impressive, it matches Interstellar for sheer striking imagery. Frankly, at this point, all questions about ‘what might have been’ with Wright at the helm are rendered redundant – this is Reed’s film and he proves to be brilliant choice for the movie. 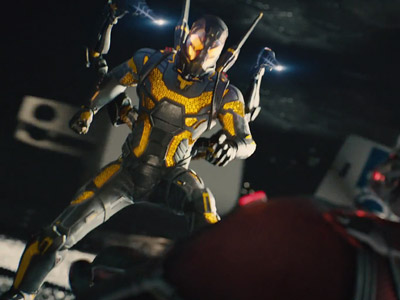 Oh yeah, this is the bad guy. He's pretty good too. Well done me for mentioning him.


There are flaws, of course. The plot adds a time pressure to proceedings meaning that Lang goes from bumbling novice to tech master and fully fledged superhero in the supposed space of just a few days; stakes are raised, but plausibility – which already starts off at rock bottom – is considerably lowered further. Also the estrangement between Hank Pym and his daughter Hope (a mostly stern, unforgiving Evangeline Lilly) is resolved in such a way that you wonder why it was ever an issue in the first place. Mostly, the film flits along at such an outrageous pace, that quite often it seems to cut from point A to point B without ever drawing the line between them.

But, as ever with Marvel’s top movies, these are niggles for the sake of criticism. The fact is, this is pretty much the most fun you can have with a superhero movie and, as such, it gets added to the long list of movies that Marvel have – yet again – knocked out the park. Seriously, this is getting kinda boring now. Who else is with me in hoping that Captain America: Civil War is utterly shit, just so that we all have something interesting to talk about?

More:  Ant-Man  Marvel  Paul Rudd  Michael Douglas  Evangeline Lilly  Peyton Reed
Follow us on Twitter @The_Shiznit for more fun features, film reviews and occasional commentary on what the best type of crisps are.
We are using Patreon to cover our hosting fees. So please consider chucking a few digital pennies our way by clicking on this link. Thanks!