The greatest gladiator match in the history of the world: God versus man.
By which, of course, I mean Zack Snyder, the all-powerful harbinger of wanton destruction, versus us, the humble cinema-goer, merely looking for some entertainment. Some cool stuff, for sure. Maybe even a joke of two. It's Student from the School of Michael Bay versus, say, Andy from Dagenham. Who will win?


Inevitably, no one does. Whether you choose to put differences aside and team up with Snyder's uncompromising almost-dystopian comic-book vision, or if you just let it pummel you into submission, the result is the same. Batman V Superman: Dawn Of Justice is a punishing experience. But not an entirely unenjoyable one.

Continuing on from Man Of Steel's brooding beginnings, this half-sequel, half-pre-assembled-crossover is even more grim and foreboding than its predecessor. From start to finish, we follow two superheroes who are burdened with the weight of their respective cities and who struggle with their own wavering heroism, albeit from opposite ends of the spectrum. The story is relentlessly despondent, presenting its two leads as lost, orphaned souls trying to work out how to do good in an unforgiving world while facing insurmountable opposition and getting more discouraged by the minute. If it all sounds epically dark and humourless, that's because it is. It's a furrow-off between the two titular stars. It's Snyder's super-serious smackdown and there isn't a giant Thomas The Tank Engine or talking tree in sight. 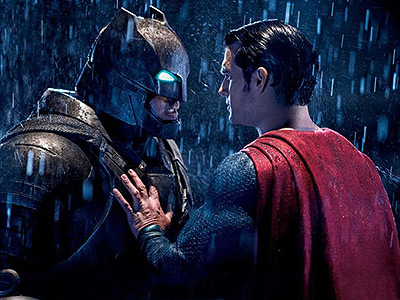 There is, however, a tiny amount of super-homoeroticism.


But there's something compelling about this approach, almost refreshing, even. With Marvel lighting the path to blockbuster box-office gold, this film is incredibly ballsy to stick to its guns and follow the house-style set out in Man Of Steel (of which, for transparency’s sake, I wasn’t a fan). Whereas that film played out as a first-contact movie, this follow-up explores the horror that ensues from those events, both figuratively, with Superman cutting a tragic figure of persecution, and literally, with a giant fuck-off monster to fight at the end of it all. And in trying to match the tone of source material inspiration like Frank Miller's The Dark Knight Returns, this film is the closest we have ever come to seeing the pages of a gritty, 'adult' comic-book put directly up on the screen.

But with this slavish dedication to an ambitious style comes the sacrifice of characters. Despite sharing an equal amount of screentime, this feels much more like Batman's movie than Superman's, and not just because every scene in the entire movie seems to be set during the dead of night. His motivations are really the only ones that are given any consideration, with Ben Affleck making for an imposing, formidable Bruce Wayne following a mysterious detective trail while rallying against the potential threat that Superman presents. It helps, of course, that the film's overbearing self-importance is a good fit for the caped crusader's scowling cowl.

Superman, on the other hand, seems out of place and thematically de-energised by the movie's lack of light. Reasons for Clark's dogged disapproval of Batman's methods go largely unexplored, perhaps lost to the film's original, longer edit. Meanwhile, his romance with Lois Lane and his developing court drama consist mostly of dialogue that serves as an apology/justification for the much-maligned destruction at the end of Man Of Steel. 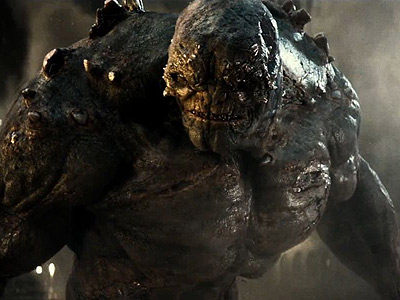 Good thing there's none of that this time arou... oh.


Whether or not dedicated fans of these superheroes will be happy with their portrayal here is up for debate (one that will no doubt last for years to come), but one of the film's biggest issues comes in continually trying to humanise Superman by having him express doubts about his actions and his moral compass. He would arguably have more of an impact here if he was the pillar of integrity that he has always traditionally been, playing the part of moral anchor in contrast to Batman's questionable ethics.

But then, just with Man Of Steel, this is a film full of missed opportunities and underexplored themes. The population of Metropolis heralding Superman as a God and then defying him is really only briefly shown via a shot of an adoring crowd, followed later by news footage of a city hall protest. Meanwhile, in Gotham, Alfred insightfully remarks that Bruce Wayne has accomplished more in his investigation as himself rather than as Batman - an interesting point that is undermined when Wayne immediately suits up in the cape and costume again.

Then there are the outright ridiculous moments that deserve to be placed in the 'What were you thinking?' folder for all comic-book movies alongside Green Lantern's giant fist and Vinnie Jones being allowed anywhere near the X-Men franchise. A far-too-quickly realised resolution (over a frankly trivial detail) to the main conflict is majorly mishandled, while Lois throwing away an important object only to have to try to retrieve it again minutes later is hilariously unfortunate. And the sight of Wonder Woman scrolling through an email she has received from Batman just comes across as pedestrian and lame. 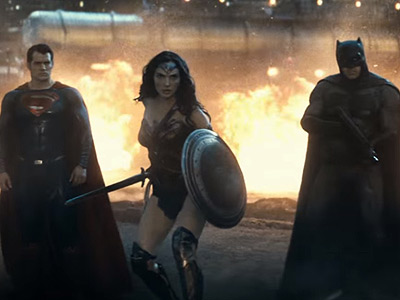 "Hey, Wonder Woman. Did you get that video of the snoring panda I sent?


Overall, the movie is exactly what most will be expecting: a joyless husk of impending doom that gets exponentially worse the more it descends into a torrential onslaught of bigger, more preposterous CGI explosions. But there are kernels of interest that hold in each misstep. Jesse Eisenberg’s Lex Luthor will be hugely divisive but he is nothing less than interesting, with a lack of clear motivation allowing him to just act as an agent of chaos throughout. Bruce Wayne’s nonsensical nightmarish visions flout basic narrative rules, but at least they track back to Man Of Steel’s storytelling style, serving as replacements to that film’s frequent flashbacks. The teasing of forthcoming Justice League members feels forced and distracting, but the sight of the Superman/Batman/Wonder Woman trinity fighting together is still an air-punch moment for any fan.

If nothing else, the film serves as an antidote to Marvel’s output, as it should, and as it is obviously trying to position itself as anyway. So, in that respect, it is a success. But, yet again, there are so many obvious flaws here that the future of the DC game-plan has to now be called into question. More to the point, perhaps Warner Bros needs to stop believing in Zack Snyder’s abilities to bring redemption to this franchise. If there was ever a time to have a crisis of faith in him, it is now.

More:  Batman V Superman Dawn Of Justice  Batman  Superman  DC  Zack Snyder  Ben Affleck  Henry Cavill
Follow us on Twitter @The_Shiznit for more fun features, film reviews and occasional commentary on what the best type of crisps are.
We are using Patreon to cover our hosting fees. So please consider chucking a few digital pennies our way by clicking on this link. Thanks!