John Carney's Begin Again, a feel-good acousticky-summery-strummery thing, does a great job of convincing you why music matters so much. Despite a few flaws it even won me over, and I haven't listened to anything outside the Radio 2 playlist for about three years.


Men in independent films fall out of love with things a lot, don't they? A previously deeply-held passion for something or other - a sport, a career or a hobby, and alongside it, in almost all cases, shaving - has been lost somewhere down the line, usually when they had to grow up and face life's mundanities.

True to the generic template, Dan (Mark Ruffalo) is a bit unshaven and generally dog-eared throughout Begin Again, because he's a record producer who's fallen out of love with music. He's also drunk a lot of the time. I do wonder sometimes why men who've gone off the rails in films always do so through excessive raffishness, partying and ignoring their responsibilities, whereas a woman's crisis state will always manifest through promiscuity.

But Ruffles cares about my feminist sympathies about as much as you do. He's busy falling apart after Mos Def (yes, Yasiin Bey, but come on: Mos Def) kicks him out of the record label they started together. Plus he and his wife (Catherine Keener) aren't together anymore, and his daughter (Hailee Steinfeld) is hitting her teens and beginning to realise what a flake he is. Living apart from her, he doesn't know what her interests are and she's not telling him. 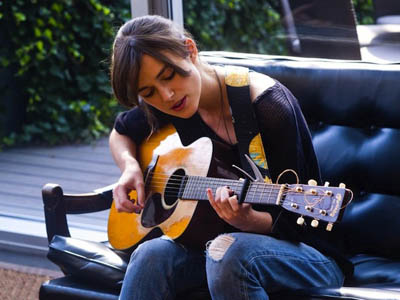 
His upswing begins when he drunkenly sees Greta (Keira Knightley) performing one of her songs reluctantly on a small stage, and he decides she's the talent he needs to get his own label going. This is illustrated nicely by his visualising the stripped-down song with backing, seeing the instruments behind her playing themselves. She's just split up from pop star boyfriend Dave (Adam Levine, out of bloody Maroon 5) though, and needs some persuading. We're shown the characters' paths to this encounter once from each perspective, and it's a neat trick, well executed, though it takes a bit long to get there even once you've figured out what it's up to.

There are two things going on here, vying for your attention. One, the standard platonic, mutually beneficial unlikely male-female pairing, whereby they're both damaged and help to fix each other, with the odd suggestion here and there that they're going to fuck like angry Vikings just to help it along. Two, more interestingly, the idea that authenticity is something to be valued greatly, and the use of music as a metaphor for that.

Dan is flawed, but he's authentic, and that's what Greta finds inspiring in him: once he starts to dust himself off he pours himself into producing her album - a ramshackle, let's-do-the-show-right-here project recorded in various New York outside spaces - and his love of and belief in music is obvious. Her ex-boyfriend Dave is anything but: he's compromised his ideals for pop stardom and cheap sex with the hot record label girl. This missteps pretty drastically in one scene, where his overproduced chart hit that she sees as emblematic of his choices is used as stirring incidental music to help us take in Greta's character growth, but the point has already been well made. 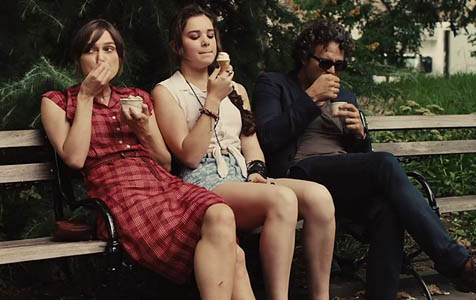 "The two young women were last seen with a suspicious-looking man on this park bench. The public are advised not to approach him."


The songs - sung very well by Knightley - are pleasantly summery acoustic fare, the main one memorable enough that I can still hum it a month later. As well as pre-recorded rather than live songs worked in last year's Sunshine On Leith, there's a less immediate feel about them here. Knightley lip-syncs her own voice just fine but the songs sound studio-played when they're supposedly being performed in an alley, and there's a distance created by your wondering whether the voice is actually hers, having never known before that she could sing. Or at least there would've been if I hadn't just told you about it. She's copped some unfair flak in her career, and deserves praise for this performance, especially when her sororal scenes with Steinfeld show a new side to the character, but there's the overall sense she's been shoehorned in a little.

I came out of Begin Again thinking it was a story of redemption for Dan that fell a little flat because he hadn't particularly done anything in need of redeeming, save for drink a bit much and be a little immature. But I'd misread it: it's about both him and Greta rediscovering something they'd lost, through mutual respect for the authenticity that a real music-lover values so much. It works very well for that, muddying its message a little on occasion, but still a song well worth hearing.