You have to wonder whether the jukebox musical is the cultural artefact that spells the end for us as humans. Take a clutch of well-loved songs and have them belted out on stage around a story constructed artlessly to fit lyrics whose author barely thought them through beyond whether they rhymed or not. (An Oasis one, I remind you, is inevitable.) But then take one that features the songs of an act whose words have always told meaningful, funny and engaging stories in themselves, and maybe you've got something. Dexter Fletcher certainly has: as unlikely a pairing as he is with the project, he's hit upon some sort of alchemy with Sunshine On Leith.


It seems a bit nuts, really. There is an obvious desire in Fletcher not to be pigeonholed as a director, and it must have irked him to see his first feature, Wild Bill, marketed along the same lines as Lock, Stock and Two Smoking Barrels when it bore it little resemblance. If the plan was to move away from this perception of his filmmaking, then mission accomplished: a musical featuring the songs of The Proclaimers seems 500 miles away from what you'd expect of him.

Or maybe not. Watch the trailer and note that, without the songs, there seems to be an awful lot of trauma going on. People are arguing, looking out of windows and crying. Maybe this is a serious drama. It certainly seems like it: two Leith lads, Davy and Ally (George MacKay and Kevin Guthrie) come home from fighting in Afghanistan and try to fit back into the lives they left behind, struggling to find steady work or commit to relationships. The father of one (Peter Mullan) finds out he has a daughter from an extra-marital affair, which threatens to destroy his family. None of the above, you'll be thinking, sounds like the kind of person given spontaneously to song. 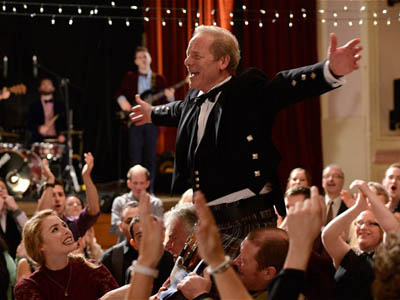 Except this guy: he bloody loves it when he's not killing dogs.


And there's your problem: how do you fit the songs into a realist narrative? Musical is a medium that calls attention to its own artifice by virtue of characters singing and dancing in situations where it makes no sense at all to do so. But there's a melding of story and song here that achieves it: Ally and Davy are heading home from the war and sing 'I'm On My Way' because they're, well, on their way. The pub landlord instigates a rendition of 'Let's Get Married' by way of advice how to propose. Yes, they're slotted in neatly, but it's more than that: Sunshine On Leith draws on the idea of the Scottish as bon viveurs and bar-stool storytellers to make the upbeat songs seem natural.

When it's time for a slow one, the other side of the Caledonian emotional coin - bottled-up sensitivity - has the same effect: the predictably brilliant Jane Horrocks sings 'I Hate My Love For You' quietly alone, cursing her inability to leave her husband for his infidelity. Relationships in musicals are usually painted with broad strokes as a way of sidestepping the need for characterisation - a couple has an argument, then simply reconciles through song - but here where George MacKay and Antonia Thomas make up through 'Then I Met You' there's a real sense of the song and their acting leading us through it. 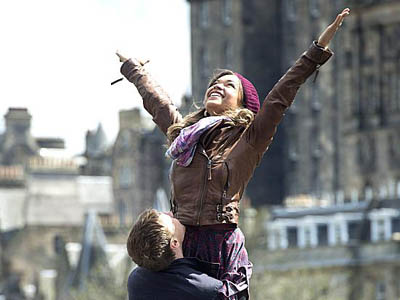 "CUT! For the last time, YMCA's not a Proclaimers song!"


This can't work 100% of the time, of course: the narrative justification for 'Letter From America' feels a little shoehorned in: even though the song itself is about the mass emigration of Scottish workers rather than an entreaty to an absent loved one, you still need someone to actually go to America if it's to make any sense to the story, so you know that's going to happen at some point. Out of context, the lyrics don't quite work, but fair enough: you couldn't have a Proclaimers musical without it, and it's a pleasingly muted rendition in any case. 'Make My Heart Fly', too, doesn't quite scan when sung by a man in no danger of his lover disappearing.

Fans will always lament absent songs, of course: for me it seems a no-brainer to use Shout Shout in an argument scene, and I had hoped to see Cap in Hand, too - though in fairness how you fit a Scottish nationalist protest song into a story like this I've no idea. But the fact is, this is designed for Proclaimers fans and non-fans alike, and its appeal is universal. Quite right, too. Who doesn't want to see Peter Mullan's wonderful head with 'I'm Gonna Be (500 Miles)' coming out of it? Or Jason Flemyng dancing around the Scottish National Gallery? No one, that's who. If you spot any deficiencies you forget about them within seconds because you're too busy grinning like a simpleton, charmed by the songs and engaged by the story all at once.

Look, it's good, all right?

More:  Sunshine On Leith  Dexter Fletcher  George MacKay  Kevin Guthrie  Peter Mullan  Antonia Thomas  Freya Mavor  Jane Horrocks  Jason Flemyng
Follow us on Twitter @The_Shiznit for more fun features, film reviews and occasional commentary on what the best type of crisps are.
We are using Patreon to cover our hosting fees. So please consider chucking a few digital pennies our way by clicking on this link. Thanks!