Trouble with all boxing films: they aren't Rocky. Rocky not only set the benchmark, but the template, out of which no one's really managed to break: guy has to overcome adversity, the other boxer is a metaphor for his life, and his real opponent is himself. True-lifer Bleed For This is a bit different. But not that different.


It's interesting for being the first film director Ben Younger has made in over ten years, though. There's usually a better story behind a creative absence of this length, like My Drug Hell or a series of development hurdles, but no: having made one of my all-time second-hand-VHS favourites Boiler Room in 2000, he then turned out only 2005's Prime before jogging on for a few years to ride motorbikes and cook fish in his mate's restaurant in Costa Rica. A few years later Martin Scorsese, a Boiler Room fan, rang him up and helped him finance this.

But there is arguably not much point in making boxing films anymore. Other than Creed, which was bold enough to appropriate the boxing franchise and turn it into something different, has one had anything new to say for a couple of decades? Bleed For This doesn't buck this trend, but it is at least very funny, and more focused on showing the fighter's external struggles than on using the in-ring action as a metaphor for them.

The whole film is in the trailer, but look: man is boxer, breaks neck in car crash, is told he might not walk again, never mind box, and starts on the old iron-will comeback trail. As well as fixing himself he has a bit of a redemptive arc to go on: Vinny Pazienza is a bit of a dick, up late in the casino the night before a big fight, wasting his talent. Miles Teller is an obvious fit for him, being, let's face it, a bit douchey himself, and hams up his Rhode Island greaseball shtick very nicely. New trainer Aaron Eckhart, having shaved himself a receding hairline in order to find the spare hair for his Sully moustache, calms him down a bit and gets his career back on track. 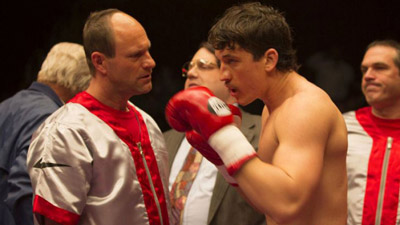 You laugh, but there'll be people in Shoreditch deliberately doing their hair like this already.


Once Vinny gets a car in the face (pretty much literally: the crash is shot from the back seat so you see it swerve into your path just in time to realise you've got no chance to get out of the way) the momentum doesn't all shatter and start rebuilding in a Million Dollar Baby sort of way; it continues at the same pace but with different goals. As per that film, the boxing is the least interesting thing about it, so we're glad there's something else for this guy to go through than just learning to believe in himself so he can run down the beach and duff up Clubber Lang. But once Vinny refuses the surgery that would put him on the path to walking again but rule out boxing, we're in slightly clichéd territory and don't stray far from it again.

It's a boxing movie so you know where it's headed – though in fairness it seems pretty true to Vinny's actual story, so whaddya gonna do – but there are laughs along the way, courtesy of Pazienza having been such an endearing goof, and he and his trainer play out a fairly touching bromance. It doesn't need to exist, particularly, but hey, if you wanted something new you wouldn't be watching a boxing movie.

More:  Bleed For This  Ben Younger  Miles Teller  Aaron Eckhart  Katey Sagal  Ciaran Hinds  Ted Levine
Follow us on Twitter @The_Shiznit for more fun features, film reviews and occasional commentary on what the best type of crisps are.
We are using Patreon to cover our hosting fees. So please consider chucking a few digital pennies our way by clicking on this link. Thanks!