There was a time when seeing overtly racist characters on screen was shocking. I can remember real, genuine frustration on watching Mississippi Burning for the first time; actual anger that this happened, and useless, impotent white-saviour frustration that I couldn't do anything about it. Now that there's a global instant news network, events like Charlottesville play out and are documented in real time, and proud, gleefully stupid characters like Christopher Cantwell willingly offer themselves up as celebrity apologists for their empty ideology. So seeing racism on screen doesn't shock me like it used to.


Maybe it's me that changed. Tethered all day to a smartphone, ingesting all the shit in the world on Twitter, numb to its awfulness, meekly dripping my #hottakes into its brown liquid ocean. It can lead you to expect the worst in people. Whatever: even I can see that Detroit is a hugely powerful film, and Will Poulter's performance as racist police officer Philip Krauss has a lot to do with that. 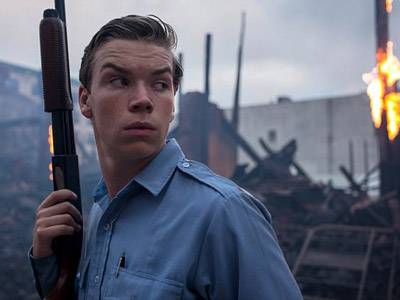 "Racist Police Officer" isn't the character's job title. No, it's more subtle than that.


Films like Detroit used to be made for liberal white audiences, their "power" being to induce the sort of reaction that Mississippi Burning did in me, after which we'd congratulate ourselves inwardly on being so woke. I feel like this is changing. In recent years I've watched films by black directors that have no interest in making me feel comfortable, or in explaining slang or cultural references that might be obscure to me as a white viewer. I'm thinking in particular of Moonlight, and of both Ryan Coogler's features, Creed and Fruitvale Station. I consider these in comparison to Theodore Melfi's Hidden Figures, a Best Picture nominee on the strength of a marketing campaign which made it out to be a hard-hitting Film About Race, when in reality it was just a well-made, enjoyably frothy period drama.

Hidden Figures is a good example of the notable feature that tends to define "race" films made by white directors: they usually contain a desire to "solve" racism in some way; to demonstrate that it is being fought against and resisted. When made by black directors, they more often just present the case of affairs and leave it at that. In Detroit, Jason Mitchell's Carl Cooper, whose mucking about with a starter pistol instigates the film's events, sums this up early on to the two white girls in their motel room: "Being black is like having a gun pointed at your face". He means permanently; it's a simple statement of daily reality as far as he's concerned, not something we're on the way towards fixing.

So Kathryn Bigelow's film is unusual in this regard: it brings to your attention a lesser-known true story of police murdering black "suspects" – the Algiers Motel incident during the Detroit riots of 1967 – and that's as far as it goes. Its power is in your own outrage.

John Boyega, as security guard Melvin Dismukes, dragged into the whole affair because he was offering coffee to the nearby National Guardsmen, pulls off something pretty special. There are layers he needs to append and he does so without losing control, even in scenes when a bit of a meltdown might've given him a nice little Oscar showreel clip. Forced by Krauss to go along with the brutal and unjust detention of the black party-goers, he does so with the sense that he has no choice, without seeming cowed, which would've taken the character elsewhere. Later, under police questioning, as a terrible realisation dawns on him, his hand begins to shake a little as he puts it across his mouth, and it's one of the deftest bits of acting you could hope to see. 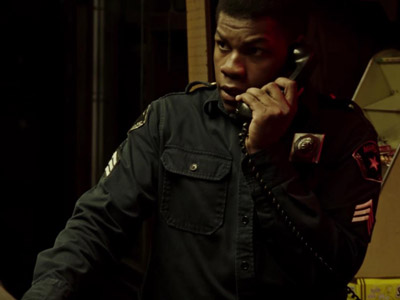 I never tire of being reminded that this guy is from Peckham.


Poulter's the standout bastard here. Acting is often seen in terms of risk and reward; as though the more you put your public image on the line, the more plaudits you deserve, and so the white guy who plays the worst racist often gets the big write-ups. But you can't deny what he achieves here: the inescapable fact that he does and probably always will look about 15 works to his advantage, letting him hint that Krauss is out of his depth, getting by on the bigot's self-confidence alone, hiking up the stakes and playing a more and more dangerous game as he runs out of ideas and power. There's more going on here than a simple, one-note racist.

That Krauss's actions and Detroit in general don't shock me maybe says something about a world in which racists feel so emboldened to stick their heads above the parapet that they come to seem commonplace, or maybe about my own indolent failure to engage with issues beyond my own front door. But when we already see it all around us, there is far more power in a film which simply demonstrates racial injustice than in one that seeks to provide pat solutions to it. In shining a light on a case without heroes, Detroit looks at the America of 50 years ago, and without needing to draw the obvious contemporary parallels, asks the question: Do we really want to go back there?