Remember when I said the 101 reasons to love Nicolas Cage feature would be the last thing we did on Nicolas Cage this week? I lied.


Firstly, as I know you're all dying to find out, I'll address the burning issue: 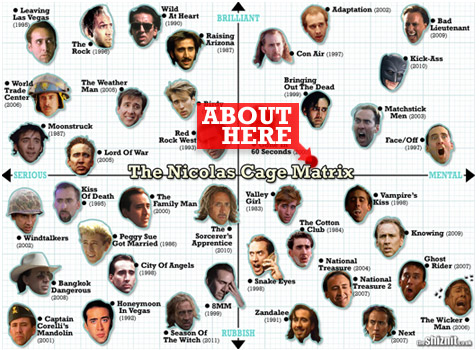 Now let me elaborate. Drive Angry is very obviously Nicolas Cage embracing his own ridiculousness, or - in language invented by Bad Lieutenant director Werner Herzog - "releasing the pigs". It's a movie about a man who breaks out of hell to rescue his baby granddaughter from the Satanic cult who killed his daughter, usually by running people over or, at a push, shooting them in the face. Also, he has a blonde mullet. You know what you like and Nicolas Cage is giving it to you. In angry 3D.

The strange thing is, Cage is unusually restrained for a movie with such a bonkers premise. There's only one scene where he reveals to us the horrors of the underworld (features the baffling line: "The burning's not the worst part... it's the video feed!" Apparently you can't get HDMI for shit in Hell) and rather than relate it in the mad-eyed gibberish we've come to expect, he goes all glassy-eyed and intense. Which is fair enough, but surely there's an opportunity for large-scale pig-release right there.

Equally weird - and not in the way intended - is the fact that Cage is overshadowed in his own movie. Not only is he blown off screen by the hotpant-clad ass of Amber Heard (who bends over every bonnet in a four-mile radius) but he's out-Caged by supporting player William Fichtner, who plays The Accountant; Satan's own pencil-pusher out to return Cage to Hell. He's a straight-talker with a taste for profanity ("You! Fat fuck!") and '70s funk and he's by far the best thing about Drive Angry. 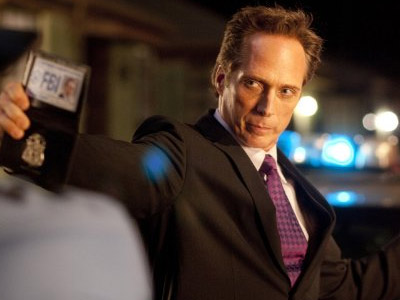 
It's all highly ridiculous, of course - as if any film in which Nicolas Cage gets tasered while fucking a barmaid could be award fodder - but the grimy, B-movie tone that director Patrick Lussier has aimed for is all over the place. The car engines are throbbing, the women are hot and the blood flows freely, but it feels about as authentic a grindhouse experience as... well, Grindhouse. There are odd design decisions that contribute; a desaturated palette matched with cutting edge 3D being one jarring combination.

To be honest, it's easy to watch and difficult to dislike, but Drive Angry often feels like its trying a too hard to rebel. Violence, sex and swearing are all obviously big and clever and cool, but when you're slapped round the face with them for an hour and a half it all becomes a little bit... boring. And as you know, for a Nicolas Cage movie aiming for that all-important upper-right quadrant on the matrix, that's a cardinal sin.

More:  Drive Angry  Nicolas Cage  Amber Heard  Patrick Lussier  William Fichtner
Follow us on Twitter @The_Shiznit for more fun features, film reviews and occasional commentary on what the best type of crisps are.
We are using Patreon to cover our hosting fees. So please consider chucking a few digital pennies our way by clicking on this link. Thanks!