Plot is overrated, or so I heard Ethan Hawke tell Marc Maron recently. There's too much of it. Hawke comes from the theatre, where the spell cast by the actors being feet away from you means you can sit watching their interactions outside any framework of story and still go away happy as long as there was a drink at the interval. And so goes his buddy Richard Linklater's latest, in which nothing much happens but you liked it while it didn't.


This is Linklater's MO. While his 12-year opus Boyhood had a built-in structural gimmick that mediated successfully on behalf of the story's absence, Everybody Wants Some!!, like his Dazed and Confused, has none. It represents a snapshot of young men's lives as they hit a period of transition, a preoccupation of its author, and simply shows them doing stuff that people probably would.

The thing to get past is why this is remarkable and therefore why we're being shown it. If you take the idea that a story is generally about the most significant thing that happened in a person's life and apply it here, then certainly there's nothing obvious on which to hang your hat. Unless you accept that most lives have few peaks or troughs, and hardly any involve landing jeeps on aircraft carriers to rescue the President's daughter.

Once you're over this, Everybody Wants Some!! has a raison d'être: its events might be significant to its characters, even if they don't outwardly seem so, or they might be ones they forget within years; weeks, overwritten by new ones. I read it as an essay on what it is to have memories, and why the feelings they evoke are more important than their events. 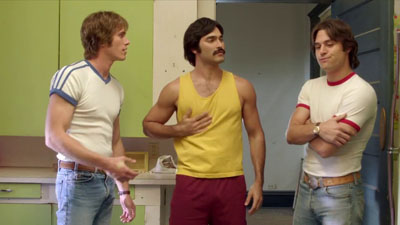 "Gonna have to dye the 'stache if you want to pull off that Hulk Hogan costume, brah."


The places you've lived, worked and studied tend to figure a lot in the memory, and Linklater's films return frequently to these places. I don't know about you, but I mainly find myself walking around the schools I went to, their corridors always empty, whenever my brain is idle. This isn't a memory so much as a setting for neutral thought, probably a safe space without complication where the return to a formative place tells me I could start again from here and maybe do things differently.

I find Linklater's narrative-light films relate to this experience on a couple of levels. First, they have a meditative effect on me as a viewer, and I find myself drifting off into the sort of state I describe above. Second, their settings in a formative space represent the anchor point to which their characters might later return when they are adults with responsibilities, and their own minds seek some sort of past dwellpoint in which to linger.

Do the events of the film still need some significance in order to be memorable? Not really: our minds recall a lot of the big stuff but also random pockets of the irrelevant. For me: sitting downwind on a bench on holiday and accidentally inhaling a lungful of my father's second-hand pipe smoke; being in his car on a Sunday looking for an open shop that sold C90 cassettes because I needed one to record something off the radio; James Spencer's mother telling mine: "So he's in double figures now!" when I was 9 and he just turned 10.

Memory isn't confined to the consequential. If a snapshot recollection is all you're looking to suggest on screen as Linklater does, everything qualifies. The characters are experiencing things just as likely to be forgotten as remembered. Jake beats McReynolds at table tennis, Nesbit steals Jake's records, Brumley beats Nesbit at bloody knuckles. The point isn't the events; the point is that cumulatively they contribute to a later memory of a time in their lives. 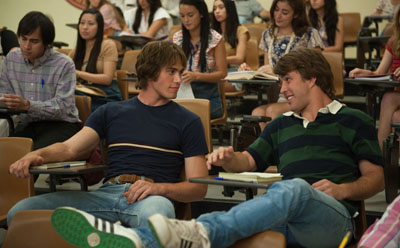 Texas, 1980: the one time in history a man could acceptably wear a rugby shirt as casual clothing.


This can be read literally, as though the film is one long unframed flashback, or figuratively; it doesn't much matter. Linklater ensures there's enough going on to justify it even if you're not in the business of looking for meaning. Mainly he presents events in mid-length scenes with a rhythm designed to whisk you off to the next one before you've had time to cogitate on whether there's any point to it. As in Boyhood, the early threat of conflict (Jake's first meeting with McReynolds and Roper in the kitchen doesn't go well: is he going to struggle to make friends?) is dashed promptly and easily, and you know you can settle in and not have to look out for it. No one seems to be having a life-changing experience.

And yet they are, because it's the fact that they're at college, away from home for the first time, forming their first proxy family unit, that is changing them, whether they know it or not. Linklater presents a time in life, a few days, showing it up for what it is: a laugh while it's happening, its specific events likely soon forgotten, but no less significant for it.

More:  Everybody Wants Some  Richard Linklater  Blake Jenner  Juston Street  Ryan Guzman  Tyler Hoechlin  Wyatt Russell  Glen Powell  Temple Baker  J Quinton Johnson  Will Brittain  Zoey Deutch
Follow us on Twitter @The_Shiznit for more fun features, film reviews and occasional commentary on what the best type of crisps are.
We are using Patreon to cover our hosting fees. So please consider chucking a few digital pennies our way by clicking on this link. Thanks!