The old Fantastic Four films from 10 years ago are an embarrassment, aren’t they? All kid-friendly colours and CGI slapstick; they might as well be cartoons. It’s great then, that this – say it with me – gritty reboot finally aims to give comics’ First Family the big-screen outing they deserve. A film that treats Stretchy Man, Rock Guy, Fire Boy and Invisi-Girl with due reverence and respect. A film that takes a realistic approach to dimension-hopping science and explores the seriousness of.. oh god, no, I can’t do it. Come back, Ioan Gruffudd, Jessica Alba, Chris Evans and, yes even you, Michael Chiklis’ foam fatsuit. All is forgiven.


I can’t think of any other comic-book movie, regardless of how good the end result was, that didn’t even attempt to be fun. Even Man Of Steel, for all its epic, po-faced emotion-wrangling still tried to make up for it’s own super-seriousness with spectacle. But this Fantastic Four film can’t even say that. Bar a pretty show of lights at the end, Josh Trank’s superhero reboot concentrates on the science of the science-fiction at the expense of all else – plot (barely strung together), characterisation (hardly any), humour (non-existent) and overall viewing pleasure (aargh, Reed Richards might as well stretch two middle fingers out of the screen and poke me in the eyes).

It’s an amazing feat to have produced a movie where every decision made seems to be the wrong one. Right from the start, too much time is spent on showing us how Reed and Ben Grimm become childhood friends and then too much time is spent discussing big science ideas in a big science laboratory. By the time our foursome return from their failed trip with scary new powers, we are 40 minutes into a 1 hour 40 min runtime. This is how long it takes for things to get interesting. And then what happens? I kid you not, the words "1 year later" flash up on screen. The film essentially skips over what should be the formative period in this superteam’s assemblage. Presumably out of laziness, because it sure doesn’t do anything to help the movie’s momentum. 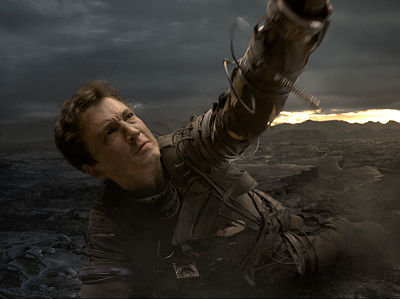 1 year later? Now THAT's what I call a stretch. Hey-oh!


The overall pacing is one of the bigger problems – too slow to start, mega-draggy in the middle and then villainous nemesis Dr Doom is introduced far, far too late – about 20 minutes from the end – leaving just enough time for the climactic battle. Up until this point, it doesn’t feel like there is any jeopardy for the team at all. So, besides showing us how the Fantastic Four got their powers, there actually isn’t that much in the way of story. We just wait until Doom shows his plastic-moulded face and hope, kneeling and praying to God, that we’ll see some actual action.

The bigger problem, however, is far more significant. The Fantastic Four’s USP is that they are a superhero family. That’s what makes them interesting – that family dynamic is the root of all the chemistry, drama and humour that should exist in a Fantastic Four story and it is absolutely the most important aspect for this movie to get. But of course it doesn’t. It doesn’t even try. Apart from the laboured back story of Reed and Ben, no relationship between any of the others is even hinted at. Reed and Sue have two conversations that end with fleeting shy glances, suggesting that we have somehow missed some imagined flirting, Ben – or The Awkwardly Naked Thing as he becomes – doesn’t even speak to anybody else other than Reed, and for all the interaction they have, adoptive brother and sister Johnny and Sue might as well be perfect fucking strangers. 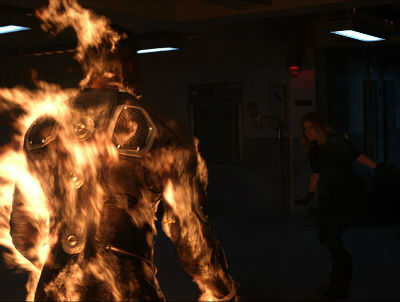 "Remember me? The Human Torch? We grew up together? No?"


Some group tension between Reed and the others is introduced in order to give the impression that there's some interesting character dynamics happening, but it is all swiftly resolved barely 15 minutes later. And come the film’s end, we are left with no reason to believe that the Fantastic Four can even stand to be in the same room as each other, let alone join forces to become a new superhero team.

It's certainly not the fault of the actors, all of whom do a fine job in their respective roles. Miles Teller stands out above the rest by sheer virtue of the fact that he is clearly a very good actor trying the best with what he’s got, adding awkward geekisms to a character who, on paper, is nowhere near as interesting. Michael B. Jordan shows charisma in his introductory scene, but is given no reason to ever smile again after that, and the eye-acting and modulated voice of Jamie Bell’s CGI husk is fine, I guess. 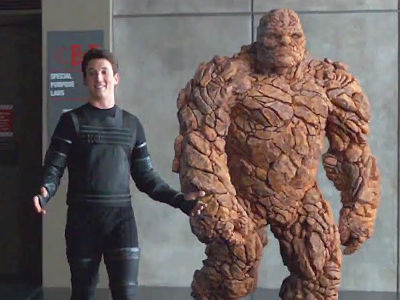 When the Thing turns around, his rock bottom provides a perfect metaphor.


It's worse still for Kate Mara. In a genre crying out for important female roles, here we have one ready made in Sue Storm, but the character is consistently sidelined (she doesn’t even attend the dimension expedition which is, for no reason whatsoever, boys only) and pigeonholed into a thinly drawn "science girl" role. Key attributes include "seeing patterns in things" like some kind of emotion-deprived autist and – of course – making everyone their costumes. Ha, girls, amirite?

By the time the film has ended on what is easily one of the clunkiest scenes and worst dialogue exchanges of the year, we are left with no desire to spend another 10 minutes in the company of this Fantastic Four, let alone particularly wish to see them in a sequel-spewing franchise. On a personal level, as someone who enjoys watching all comic-book films, both good and terrible, on rotation, this is the first one that I can categorically say I have no desire to ever rewatch. Instead, like many other fans of the characters, I'll have to resign myself to knowing that, for now, my Fantastic Four fix is still one that comes with Michael Chiklis' foam fatsuit.

More:  Fantastic Four  Josh Trank  Miles Teller  Kate Mara  Michael B Jordan  Jamie Bell  Toby Kebbell  Superheroes
Follow us on Twitter @The_Shiznit for more fun features, film reviews and occasional commentary on what the best type of crisps are.
We are using Patreon to cover our hosting fees. So please consider chucking a few digital pennies our way by clicking on this link. Thanks!