You join me as I battle the triple threat of fatigue, hangover and a burgeoning cold in attempting to semi-satisfactorily review Grudge Match in the two hours I have before I collapse. This tight schedule is caused by a three-night midweek run in which I saw the film, then contributed drunkenly to Team Shiznit's glorious triumph at the Picturehouse Podcast Comedy Film Quiz, and now am attempting to write the review by the release date. Now, when a film is press-screened three days before it comes out, you fear the worst, but they needn't have worried: Grudge Match is pretty good fun when it bothers trying.


Obviously this is fairly cheap damnation with faint praise. But what's frustrating about Grudge Match is how little you feel like being frustrated. After all, this is Stallone and De Niro, sharing top billing. I should be frothing at the chops to see this, then let down and despondent if it's not up to scratch. But I'm not. My hopes weren't high, and they ended up ever so slightly exceeded. So I have to face a sobering truth: nowadays, we expect as little from a Robert De Niro movie as we do a Sylvester Stallone one.

Exactly. Think about it. You can't much blame De Niro for not wanting to put in the Method heavy-lifting like he used to, because he's 70 and it must be a pain in the arse. But he seems to say yes to every project he's offered now, and those firebrand performances of his youth are steadily turning into dots in our rear-view mirror. 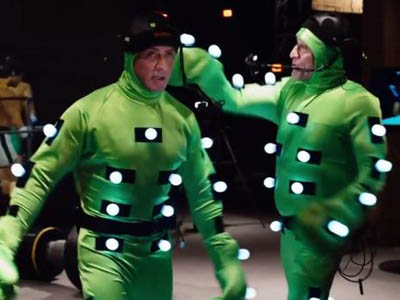 See, he never did much of this sort of thing in Taxi Driver.


And it's Stallone who's the better performer here. Few play the washed-up blue-collar shlub better than he; that familiar hangdog expression, years of wasted potential pulling down on his shoulders. 'Razor' Sharp has stopped believing in himself, having quit boxing after a promising career start and a bitter rivalry with De Niro's 'Kid' McDonnen. Now with some interest in a rematch 30 years later after a viral video, chancer Kevin Hart sees an opportunity to promote it.

There are skeletons in both closets, of course: Kim Basinger shows up as Razor's ex-girlfriend, and the excellent Jon Bernthal as Kid's illegitimate son. Bernthal seems to be in a different film to everyone else, bringing his A-game where most around him don't. (He was similarly incongruous in last year's Snitch.) You imagine he jumped at the chance to work with De Niro, out of the reverence most young actors hold for him, but you wonder whether he came away a little disappointed the older man didn't give him more. 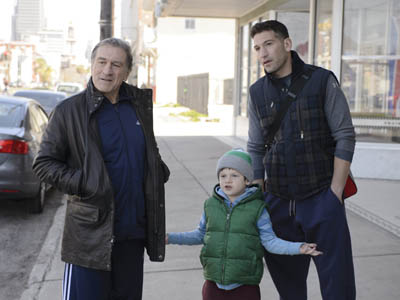 The kid was written in because of a stipulation in Kevin Hart's contract that he not be the shortest man on set.


All right, this does a couple of performers a disservice. Kevin Hart is perfectly cast, zipping about all over the screen and raising a lot of laughs, and in particular Alan Arkin as Sharp's old trainer gets some great lines. This is a comedy, don't forget, but most of the responsibility for bringing the funny seems to have been left with these two; the others are mainly propping up the dramatic end.

My main concern - and Stallone's, who reportedly had to be coaxed on to the project - was that Grudge Match would tread on the toes of 2006's Rocky Balboa, which rounded off Stallone's signature franchise to total satisfaction, and after which he wisely decided to leave Rocky alone. It doesn't muscle in, particularly, though there are some inevitable Rocky jokes, and similarities in the plot; this feels like a different animal. And it delivers an ending that I didn't see coming, which you have to admit is pretty rare for a boxing film. But it's a comedy which isn't quite funny enough, in the end, and feels mainly like a sentimental sports drama with a couple of comic characters thrown in to do the jokes. No one's trashed their legacy here; you can still watch Rocky and Raging Bull without Grudge Match even crossing your mind. But it's a shame it isn't better, and it's a real shame you didn't expect it to be.

More:  Grudge Match  Peter Segal  Sylvester Stallone  Robert De Niro  Kevin Hart  Alan Arkin  Jon Bernthal  Kim Basinger
Follow us on Twitter @The_Shiznit for more fun features, film reviews and occasional commentary on what the best type of crisps are.
We are using Patreon to cover our hosting fees. So please consider chucking a few digital pennies our way by clicking on this link. Thanks!