Hereafter opens with a tsunami. Despite some occasionally shaky CG effects (correction: occasionally shaky Oscar-nominated CG effects), it's a powerful, harrowing scene, particularly in light of the recent worldwide floods. It's also quite apt, as the following two hours of Hereafter can only be described as a tsunami of boredom - you'll be helpless as waves of indifference crash down on you and you're overcome by a strong torrent of sludgy dialogue. Before long, the afterlife starts to sound pretty damn appealing.

Guh, even writing about Hereafter is a drag. The script's by writer Peter Morgan (correction: Oscar-nominated writer Peter Morgan) and it's your standard multi-threaded, cross-continent, award-winning epic set-up - we can only assume it looked good on paper. The result, sadly, is a crushing bore - exactly the kind of overlong, tiresome drama that's trying to convince audiences it has something 'important' to say. It doesn't, and considering it's tackling the topic of the afterlife - probably still one of the biggest remaining taboos of mainstream cinema - it amounts to more than just a bad movie: it's an offensively bad movie on every level. 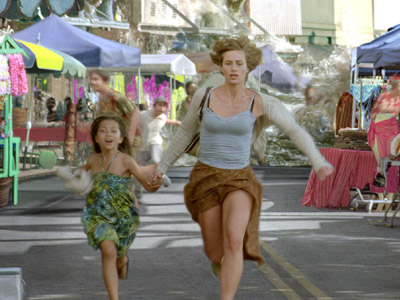 "Run! The Oscar-nominated special effects are gaining on us!"


In thread one, we follow Matt Damon's ex-psychic as he turns his back on the old Derek Acorah lark and attempts to live a normal life ("It's not a gift, it's a curse," he moans, over and over and over). In thread two, we see how Cécile De France's writer copes with her aforementioned near-death experience and tries to convince her boss to let her write a book about it (spoiler: he does). In thread three, we follow a London lad who's trying to cope without his crack-addled mother and his twin brother, who lost a fight with a van.

Like Babel et al, you suspect all three sub-plots will come together eventually, and they do. Well, sort of. Technically, they're all in the same place at the same time, but everything that precedes it is basically meaningless as a result. It's so convoluted, it's like Morgan turned in a half-finished script and the gaps were filled in by Clint Eastwood's carer. Nothing is at stake. The movie suddenly shifts from ponderous existential waffler to schmaltzy romance and expects you not to notice. 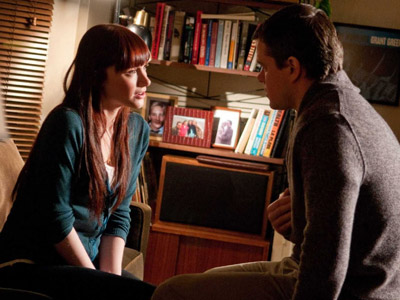 "Your dead mom is telling you to take your top off."


What went wrong, Clint? How did an actor as brilliant as Matt Damon wind up turning in such an uninterested performance? Why does love interest Bryce Dallas Howard disappear halfway through the movie? Is the emotional hook of France's storyline really supposed to be her struggle to change the subject of her already-commissioned book? Could Eastwood really not find any young British twins who could act? Couldn't he just have found one good kid and Winkleveissed him? So many questions, so much time to ponder their futility as Hereafter drags on and pulls you under.

This is a movie that boasts an awesome natural disaster, a terrorist bombing, a character who can talk to the dead and a Matt Damon shower scene. By rights, it should at least be semi-watchable. Hereafter is not even quarterly-watchable. It's a bloated, self-satisfied turkey that loves the smell of its own farts. You'll come away no richer for the experience, just 129 minutes older and filled with regret.

Watch Biutiful instead, for Christ's sake - it doesn't have a tsunami but it won't make you wish you were dead, either.

More:  Hereafter  Clint Eastwood  Matt Damon
Follow us on Twitter @The_Shiznit for more fun features, film reviews and occasional commentary on what the best type of crisps are.
We are using Patreon to cover our hosting fees. So please consider chucking a few digital pennies our way by clicking on this link. Thanks!