Damian Lewis means to kill us all, the ginger bastard. I always knew it. Right about now I'm suspecting everyone of being an Al-Qaeda sleeper, even my mum. That's how good Homeland is.


Last week I wrote a bit about post-9/11 cinema in a review of Extremely Loud & Incredibly Close for TheShiznit.co.uk, which I like to think I pulled off with only moderate insult to the memory of those who died in the World Trade Center. It got me thinking about post-9/11 TV. It didn't really: I just thought that'd make a decent segueway.

Other than a show I think I remember - but might have dreamed - called Sleeper Cell, it hasn't come up all that much. 24 (which premiered only a couple of months after 9/11) tapped into America's growing obsession with counterterrorism, but did a bit too much Muslim-bashing in the process for some.

But if you're looking for a non-gung-ho TV depiction of a CIA anti-terrorist unit, Homeland is where the search begins and ends. This isn't a story about tracking down Muslims, shipping them off to Guantanamo and then high-fiving under Old Glory; we don't know who's good and who's bad, and neither do the agents. 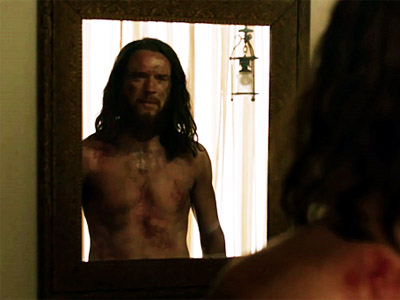 "The Al-Qaeda Heavy Torture Workout Plan could work wonders for you just like it did for me. Disclaimer: we accept no responsibility for permanent scarring."

Our window into this is Carrie Mathison (Claire Danes), who's as paranoid as her country is - but that doesn't mean she's wrong. Having received intelligence in Iraq that an American soldier has been turned by Al-Qaeda, she gets home to find that Marine Sergeant Nicholas Brody (Damian Lewis), captured over there and presumed dead for eight years, has been found alive and is heading home. He's cheered as a poster boy for the war and an American hero, but she's convinced he's a sleeper operative, and sets out to prove it.

Danes ratchets her performance up to 11 from the word go, a mess of nervous energy made even more acute when we discover she's on anti-psychotic medication. When her superiors won't let her put surveillance on Brody she goes ahead and does it herself, planting cameras in his home and watching them obsessively from her sofa.

Lewis, of whom American audiences won't have seen much since Band of Brothers, is a quiet counterbalance, trying to deal with press attention and a family who has learned to live without him. As the season goes on he'll likely also have to deal with the fact that his wife started sleeping with his best friend when they thought he was dead. The show is full of these little moral ambiguities: are we glad his marriage is insecure because we think he's a terrorist? Would we definitely be, if we knew he was for certain? Hey, Al-Qaeda are people too, you know. You think it's easy getting back from a hard day's suicide bombing to find your wife at it with the milkman? 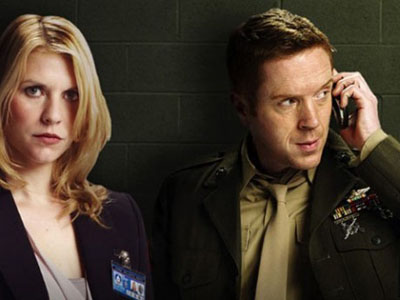 No budget for a phone-tap? Just stand in the same room as the guy while he talks. He'll never notice.

All of this comes at us at breakneck speed, with shaky handheld cameras emphasising all the uncertainty, but a steady handover of plot detail - including some brief but violent torture scenes in flashback - that never gives away too much too quickly.

We don't get around to doing a lot of reviews round these parts, mainly because the call of a Photoshopped picture of Benedict Cumberbatch looking like an emu (*makes mental note*) is far too hard to resist instead. When I do them, though, I save the five-star rating for things I literally can't find fault with. So here you go: Homeland, a flawless first episode. Deal me in: I want more and I want it now.

More:  Homeland  Claire Danes  Damian Lewis  David Harewood  Channel 4  Showtime
Follow us on Twitter @The_Shiznit for more fun features, film reviews and occasional commentary on what the best type of crisps are.
We are using Patreon to cover our hosting fees. So please consider chucking a few digital pennies our way by clicking on this link. Thanks!