Just how do you follow The Avengers? Surely going back to single-hero stories after that huge-scale monster blockbuster just seems like a disappointing step backwards? God, Marvel have really dug themselves a billion-dollar hole, haven't they? I bet they’ve been puzzling over what to do next while using a solid-gold, diamond-encrusted head scratcher. Well, it's lucky for them that, as with phase one of Marvel's Cinematic Universe, this next chapter is being led by the shiniest instrument in their toolbox: Robert Downey Jr (who outshines even the most polished of Iron Man suits). And, with Shane Black in charge, we get more Downey Jr than ever before in what is not only the best Tony Stark film to date, but also Marvel's most mature output yet.


Marvel have long represented the colourful and fun side of comic-book movies in contrast to Nolan's gritty Gotham, but this first post-Avengers film looked to mark a change in direction into more 'dark and epic' (sigh) territory. From the trailers alone, it is clear that Tony Stark's world is crumbling around him, he seems unable to keep loved one Pepper Potts safe from harm and the catastrophic events in New York are obviously taking a toll. And where is Happy? WHERE IS HAPPY?

And yet this film isn’t trying to be The Stark Knight – the same sense of fun that permeates the first two Iron Man films is obviously top priority here. The only difference is that, unlike his previous outings, this the first time that Stark feels truly vulnerable. Unlike the metal-kerdunking showdown in Iron Man, and Mickey Rourke's lame whips and drones in Iron Man 2, Black makes it seem as though the stakes have never been higher for our billionaire playboy philanthropist. For once it seems like we might not get a rosy, reset ending and – again, for the first time – it really feels like anything can happen. 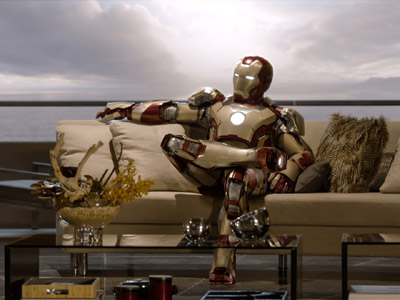 
As if to prove that really anything can happen, expectations are subverted at every turn. Whether it's in having Pepper don the Iron Man armour in a surprise move or in deflating big, dramatic action moments with a cheap – but actually obviously very expensive – gag, Drew Pearce's script keeps the action feeling fresh, while ensuring that this is still somehow the funniest of Stark's adventures. And with a bold and brilliant character bait-and-switch at the midway point, Marvel add another accomplishment to their ever-growing list of mammoth movie wins: producing a summer blockbuster that, in this era of saturating trailers and set-piece spoiling TV spots, genuinely takes you by surprise.

Unfortunately, with films of this nature, it seems impossible not to have a few niggles. In this case, a brief, plodding middle section brings what is otherwise a fast-paced film to an almost halt (although choice dialogue between Stark and the young boy he befriends during this time helps to smooth things over). Also, the final act, which sees all of Tony's JARVIS-controlled suits put to action at once, seems to lose count of them all and will have you thinking "um... couldn't this tactic have been put to good use earlier on?". 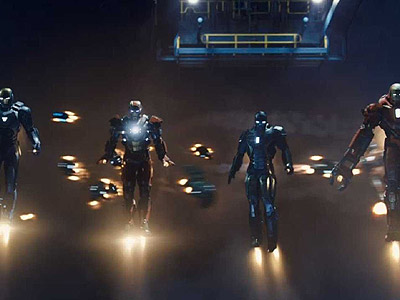 OHAI, it's about time you guys got here.


That said, this climactic battle scene is still the most thrilling that we've seen Stark endure. In typical Shane Black fashion, our hero ends up running around a shipping yard playing 'buddy cops' with Don Cheadle's Rhodes and there are all manner of dangerous things thrown his way, but thanks to shifting platforms and creatively used Iron Man suits, he manages to just keep on fighting.

If anything, this is the most surprising development of Iron Man 3 and the one that marks Marvel's growing maturity: Tony Stark has progressed to a level that would have seemed implausible in the first film. Not just psychologically - where we now know that he IS the kind of guy that can make the sacrifice play - but physically. With Stark controlling his armour piece by piece, meaning that often he is fighting with an incomplete suit or sometimes no suit at all (allowing for a lot more Downey Jr for your buck), we get to see how resourceful and efficient he is when relying more on his wits than his firepower. The result is that he handles himself throughout this film like a well-trained, badass spy - a notion apparently supported by the superb end credits theme music. 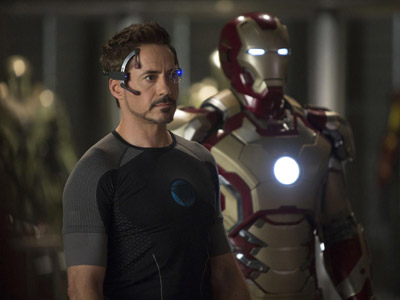 Which is probably what he is listening to in this scene.


So, after the impotent Avengers prelude that was Iron Man 2, its a joy just to see a complete standalone movie about Tony Stark again. Yet, even more impressively, all of the supporting cast are also put to excellent use. While Potts and Rhodes all get their own heroic moments, Guy Pearce's Aldrich Killian makes for a well-suited (if you pardon the pun) foe, seemingly matching Stark's intelligence and with a great vendetta just to make things extra personal. Meanwhile, Ben Kingsley puts in a wholly original performance as the Mandarin and thusly steals the whole film. In fact, of all the characters, it's only really Rebecca Hall's Maya that feels sadly lacking in the 'fleshing out' department.

As the movie ends on a somewhat final note, it feels like this really could be Downey Jr's last outing as Stark. And what's even more surprising is that it doesn't seem like that would necessarily be a bad thing. If this has to be his final Marvel adventure, he's going out on a hugely triumphant note. Besides, if this film teaches us anything about how these characters are going to continue, it's that Marvel know exactly what they're doing. And as the movie ends with the classic tease "Tony Stark will return" anyway and a fun post-credits sting, you feel like you never have to worry again, because never before has a studio seemed so capable of knowing how to keeps its fans happy.

More:  Iron Man 3  Shane Black  Robert Downey Jr  Guy Pearce  Gwyneth Paltrow
Follow us on Twitter @The_Shiznit for more fun features, film reviews and occasional commentary on what the best type of crisps are.
We are using Patreon to cover our hosting fees. So please consider chucking a few digital pennies our way by clicking on this link. Thanks!