It's only been four years since Samuel L Jackson teased his way into the end of Tony Stark's movie like a fan-wetting afterthought, but it seems like anticipation for The Avengers has been setting the Internet a-buzz for far longer. Perhaps this is because, since the comic-book genre gained credibility again, we've all been waiting for the ultimate superhero crossover movie. With Avengers Assemble, we get just that - four superhero leads meeting up for one mega-blockbuster movie in a way that has never been seen before. As a result, it is the ultimate summer event movie. It also happens to be Marvel's masterpiece.


If Iron Man 2 just felt like a long advert for The Avengers, if Captain America didn't quite live up to his super soldier reputation and if Thor spent too long trying to convince its audience that Viking Space Gods can really exist, then it was all still worth the trouble – this movie just gets it. It's exciting, incredibly funny, perfectly balanced, visually spectacular and is probably the most fun you can ever have watching a film.

It really is an astounding achievement – a film that juggles an unenviable number of elements; combining what we've seen before, slotting them together and then adding enough depth, action and humour to make this a remarkable standalone film. And not only does it simply 'work', it surpasses what we've already seen before. Filled with whipsmart dialogue and clever exchanges (eg "The man out of time" says Loki, addressing Captain America, "I'm not the one out of time" he responds before SAVING THE DAY), this also happens to be one of the sharpest films you'll see this year.

Even the usual blow-up action stunts appear fresh and original - when a car gets shunted over, it pivots in a way you've never seen before. When a henchman falls off a building, he crumples in an interestingly awkward fashion. Every second onscreen seems designed to breathe new life into a genre that was just starting to become predictable. 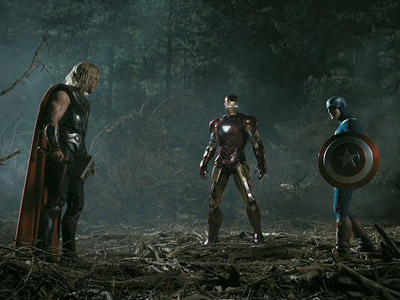 Bet you've never seen them do THIS before. Awesome, isn't it?


And it's hard to hand all the credit to anyone other than writer/director Joss Whedon. With his pitch-perfect script, not only does everyone get their moment to impress, they all have their own fan-pleasing showdowns with each other as well and even the lesser characters - like Clark Gregg's Agent Punchline - are given depth and scenes that actually advance the plot, rather than just pad out the running time.

Did you think Scarlett Johansson's Black Widow was a periphery character included just to provide some much-needed glamour and oestrogen to this macho-fest? Wrong - not only does her character excel in the action sequences, but she hints at a history that will want you crying out for her own movie. Thought the Hulk was a boring beast that just can't work on the big screen? Well, he practically steals the whole film here and may just end up being your favourite of the whole boyband bunch.

However, it's easy to let the bombastic fun smooth over some niggly cracks, of which there are a few. Most critically, this is a film with very little plot. Our UK title of Avengers Assemble is closer to the truth than that of its global, easier name of just The Avengers, because this is very much a film of meet-and-greets rather than a chance to see our team perform at their best. This also makes for a very slow start to the film as each character gets their own worthy introduction before establishing them into this particular adventure. To continue with the nit-picking, a half-way set-piece involving the assembled Avengers sees them trying to stop a giant aircraft carrier from crashing, and it all seems just a little...beneath our heroes. It's more like a high-stakes team-building exercise rather than a 'save the world' situation. 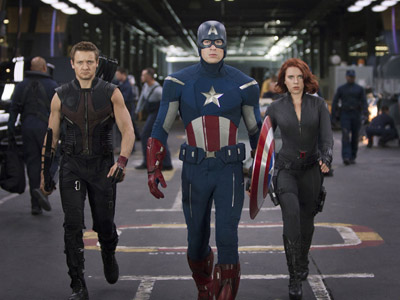 
But then this is a film that constantly grows, increasing the fun with every passing minute until it culminates in a full-on climactic onslaught that takes up the entire final act and will have you devouring every joyous moment on screen. It's never boring, relentless action either, it's well-paced, well-performed and constantly feels like it progresses the story rather than just being a blur of big-budget destruction (take note Wrath of The Titans, Battleship and any number of other films I could mention).

Ultimately, it’s a huge triumph. A film that surpasses its impossibly high expectations. Between this and The Cabin In The Woods vying for Best Film Of The Year so far, 2012 is, without a doubt, Joss Whedon's year - and that agonisingly irritating sound you just heard was a million Whedonites yelling "I told you so". Get used to it - they'll be saying that any chance they get from now on.

More:  The Avengers  Avengers Assemble  Joss Whedon  Iron Man  Captain America  Thor  Hulk
Follow us on Twitter @The_Shiznit for more fun features, film reviews and occasional commentary on what the best type of crisps are.
We are using Patreon to cover our hosting fees. So please consider chucking a few digital pennies our way by clicking on this link. Thanks!