Sure, we already gave you one review of Jack Reacher, but here's a second. Can you ever have too many? Yes, obviously: three would be too many. Point is, what divides this film's audience, and was always going to, is whether or not they'd read Lee Child's books beforehand. Your original reviewer Matt hadn't, largely because he reads the sort of rubbish that has emotions and realistic female characters in it. I, on the other hand, have, because the Reacher books are for MEN and have GUNS and 'SPLOSIONS and stuff in them. Other than that, I mainly just read Auto Trader and porn.


First things first: Jack Reacher is a perfectly adequate action thriller. It's a long way off the explosive Bourne-again franchise-opener Paramount want it to be, but it'll do. On neutral ground, this would probably be a three-star review. But for a dispassionate view I refer you to the remarks of my colleague. From the point of view of someone – anyone – who is a fan of the Reacher books, this falls short of what a cinematic translation should deliver, and predictably the problem lies at the tiny, tiny feet of Tom Cruise.

Now, Tom Cruise is a pretty good actor, and by and large a very good action hero. While I don't think directors ever really cast him because they think he'd bring something specific to a role – they do it because he's box office, or because the Church of Scientology has some dirt on them – he's more than capable of delivering a decent performance. But here the character he plays casts too long a shadow over him. 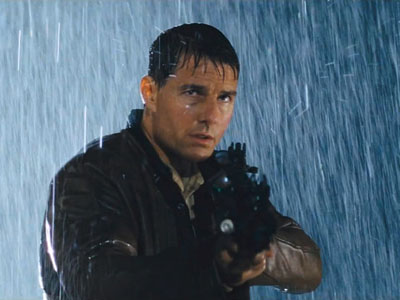 Cruise, who made sure his clothes were dripping wet at all times to maximise his bulk.

Fans' chief complaint since his casting was announced has been Cruise's height compared to Reacher's, which in the books is supposed to be around 6 ft 5. This misses the point, though. Yes, he could do with a few extra inches on him, but where he's most lacking is in terms of physical presence. Reacher in print walks into a room and dominates it; intimidates people through his stature without particularly trying to. He knows he can diffuse most situations by simply standing up. His size isn't just a physical characteristic; it's a character trait. None of this, of course, applies to Cruise. I could probably take him in a fight.

And it's in the fight scenes where the resounding 'clang!' sounds the loudest. Think of Matt Damon as Jason Bourne. He's only a couple of inches taller than Cruise, but you always believed he was the highly-trained killing machine he was made out to be, and when the quick-fire punches started flying, you felt it. The fight outside the bar you see in the Jack Reacher trailer is pretty laughable in full: not only does the circle of thugs tower over him; the volley of punches and kicks he delivers looks carefully choreographed, like a dance, and devoid of any sense of deadly force.

The real Reacher is a drifter: often unkempt, not concerned with his appearance and, crucially, not particularly impressed by himself. His lifestyle is based on enjoying the simple freedom of the road and not having to answer to anyone, which others find odd but he doesn't think of as a big deal. Cruise's Reacher seems to play the mysterious stranger card too readily: he wants people to know how enigmatic he is. He stands about in a doorway with his shirt off. They turn it into a joke and it gets a laugh, but you can't shake the feeling he's desperate to show off how ripped he is. An odd focus on how sexy he supposedly is doesn't help either: checkout girls swoon and simper at him like he's Austin Powers. 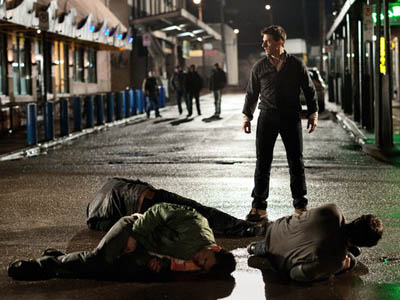 "Thanks guys, but no one's going to believe I'm taller than you just because you're lying down."

And the one character trait Cruise should be able to nail down is Reacher's facility for deductive reasoning: he'll make quick calculations and weigh up pros and cons in a second so he can react accordingly. But can he? No, he more just remembers a lot of facts, which isn't the same thing.

In fairness there aren't a lot of actors who could pull off the character. Daniel Craig would've been just about perfect if he wasn't Bond, which is too similar a role. An older Chris Hemsworth maybe. Or Idris Elba, or even Hugh Jackman, as Lee Child himself once mooted. There's no satisfaction in knowing for sure an actor will be wrong for a role and having it confirmed, especially when the character means something to you.

But fan or no fan, think of this as a missed opportunity: there are 17 Reacher books, self-contained and cinematic in scope, making for a franchise with huge potential. Tom Cruise already looks a bit old for this. And even if he ups his game somehow, unless he hits Level-One Thetan status and gains eternal youth, he's going to look even older next time around.

More:  Jack Reacher  Tom Cruise  Rosamund Pike  Christopher McQuarrie
Follow us on Twitter @The_Shiznit for more fun features, film reviews and occasional commentary on what the best type of crisps are.
We are using Patreon to cover our hosting fees. So please consider chucking a few digital pennies our way by clicking on this link. Thanks!