Already written off as potentially "the biggest write-off of all time", it's a shame to put the boot into a film that was always going to struggle during a crowded, franchise-heavy summer. Andrew Stanton is a director with two of the finest animated films ever made on his CV (WALL-E and Finding Nemo), and he has one of science-fiction's true originals on his side in Edgar Rice Burroughs' A Princess Of Mars. A production this large must have taken thousands of men and women years to create – writers, runners, artists, builders, designers, extras and animators alike. You feel for them all, because there is no escaping it - John Carter is a calamitous failure; a dirty bomb of laughable dialogue, boneheaded plotting, wooden acting and uninspired direction that will leave a smoking crater in Disney's Q1 box-office returns. If it is to flop, it's so woeful it deserves it.


Part of the problem is that Stanton makes no concessions to the fact that this story is almost 100 years old. Much of John Carter's marketing has been based on the fact that A Princess Of Mars pre-dates the likes of Star Wars and Avatar. To be fair, it does. They are unfair comparisons that Disney would be wise to avoid, but Edgar Rice Burroughs' seminal work does indeed have squatter's rights to the intergalactic romance genre. This, however, is not an excuse for a movie that feels ancient and creaky from the word go. The book was mind-blowing in 1917. In 2012, having a lead character whose main characteristic is that he can jump really high is nothing short of embarrassing. 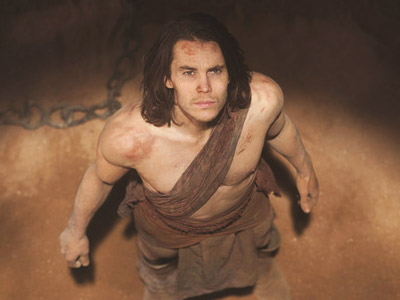 So lame he makes Green Lantern look worthy of the Avengers.


The language used has not been modernised, perhaps in fear of upsetting the 90 year-old fans of the source material: hence, we travel between Barsoom and Jarsoom (instead of Mars and Earth), meet Tharks and Therns called Tars Tarkas and Matai Shang and journey to meet Sab Than of Zodanga. Wake up, kids! Frilly language is one thing, but Jesus, they could have toned SOME of the crazy down. Wilfully silly places and races lead to unintentionally hilarious lines like, "I feared you were to be tortured by the Tharks!" and "Am I not your Jeddak?" The Burroughs bible-bashers would shit, but 99% of the audience – particularly easily distracted younger viewers – would find it far easier to follow if Andrew Stanton considered the fact the story is, y'know, older than Clint Eastwood.

So, we've established John Carter doesn't exactly break any new ground. This is as basic and rudimentary as sci-fi gets. Man winds up on far-flung planet, falls in love with feisty princess, must defeat evil emperor for her hand and save the day. With the right knowing tone, this could still work. Sadly, it's like Andrew Stanton saw Flash Gordon and said, "You know what would make this movie even better? People pulling really serious faces." Thus, every cast member delivers their ridiculously portentous lines with a near-farcical degree of sincerity: at one point, Lynn Collins's character, Dejah, remarks: "I am a regent at the Royal Helium Academy of Science!" It was all I could do not to burst out laughing.

Collins, incidentally, is dreadful. Atrocious. So wooden only the Cuprinol man would take her as a bride. She delivers her stone-age dialogue with all the grace of a tramp shitting in a pond. "You are John Carter of... Earth?" she bleats, with all the warmth and emotion of the Google Translate lady. Bless her, she's been lumped with a script clunkier than a medical shoe, but by gum, she makes the worst of it. Compared to her, Taylor Kitsch is like a shirtless Laurence Olivier, but there's still not a line spoken in John Carter that doesn't feel like a first draft suggestion – the most obvious line at any given moment. Where am I? Who are you? We have to fight back! I need to get home! AND SO ON. John and Dejah are marginally more eloquent than Burroughs' own Tarzan and Jane. 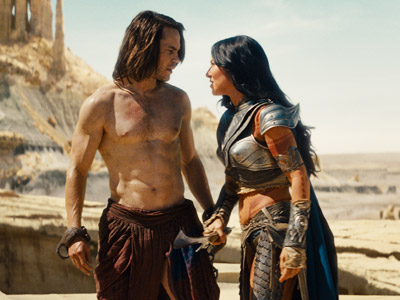 
The movie's plotting is just as woeful as the dialogue. Aside from the neat framing device of having Edgar Rice Burroughs read his own story on screen, everything else is perfunctory, by the book stuff: go from point A to point B to collect item C and needlessly hit up point D on the way back (point D in this case being an arena battle with two giant white apes, because... well, fuck it man, we've got the budget for it and... people liked Attack Of The Clones, right?).

Carter frequently does things for no reason, like spying two warring spacecrafts and deciding to blow one of them out of the sky, with only the flimsy justification of "That doesn't look like a fair fight!" How the fuck would you know? You just got to this planet ten minutes ago, asshole. Dejah tells John how she dreams of one day seeing ships bobbing on the Earth's oceans LITERALLY two minutes after travelling to some giant macguffin by BOAT. Characters traverse by a slow, horse-like creature, despite the fact they have a massive space dog following them than can run 100x faster. Early on, Carter breaks free of chains easily, but when put in mild peril later, one chain proves unbreakable – even though there's a massive gap in the link, which is highly visible IN A CLOSE-UP. NNNNGGHH. 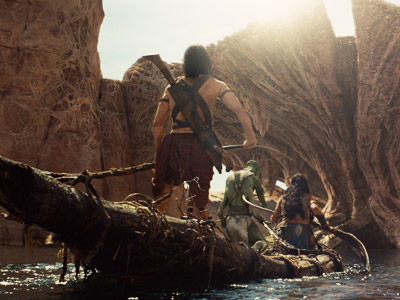 
Clearly, John Carter is a movie desperately in need of a sense of humour. There is just one notable joke – Willem Dafoe mistakes John Carter's hometown of Virginia as his name – and it lasts for approximately two-thirds of the film. Otherwise, it suffers a cataclysmic self-awareness failure. Ciaran Hinds, for example, plays an emperor of Helium, wearing half a suit of armour (which has the abs cut out, natch), a silver wig, a spray tan and a woollen shawl. It's a mystery to me why no one saw this during production and thought, shit, people are going to laugh at this. Poor Ciaran Hinds. After this and Ghost Rider: Spirit Of Vengeance, I bet he just wants to go home and hug his kids.

The person who suffers most, however, is Dominic West, aka Sab Than of the Zodangans. Of all the opportunities that The Wire afforded him, I bet he never thought he'd be flying around on hover-boots wearing a furry cape, brandishing a blue energy sword and delivering lines like, "Helium's fate is sealed, Earthman!"

That's John Carter all over. Too old-fashioned to be cool, too soaked in CG and non-existent 3D to be considered traditional. Totally unaware of its own inherent ridiculousness. It's a disastrous mix of faux-Shakespearian romance, crossed with the very worst kind of mid-80s, Star Wars rip-off, Ice Pirate-esque sci-fi tropes. It's such a soul-sucking, humourless mess of technobabble and gobble-de-gook, I'm pretty sure sitting through it made me a Scientologist or something.

More:  John Carter  John Carter Of Mars  Disney  Andrew Stanton  Taylor Kitsch  Lynn Collins
Follow us on Twitter @The_Shiznit for more fun features, film reviews and occasional commentary on what the best type of crisps are.
We are using Patreon to cover our hosting fees. So please consider chucking a few digital pennies our way by clicking on this link. Thanks!