Paddy Considine delivered a heart-stopping directorial debut with Tyrannosaur in 2011, the kind of grim, unforgettable movie that left dirt under your nails and needles under your skin. His long-awaited follow-up, boxing movie Journeyman, initially feels like it pulls its punches in comparison to its predecessor's savagery, but don't be fooled; the fancy shorts and bright lights of the ring dress up an equally complex story of recovery and redemption.


Considine directs, writes and stars as boxer Matty Burton, a middle-weight fighter coming to the end of his career, although it's about to arrive sooner than he thinks. A devastating brain injury transforms Matty from an athlete and an attentive family man to a shadow of his former self, trapped in an unresponsive body and mind. His cognitive abilities shot, he's only capable of slow speech, limited memory and painfully constricted movement, but most cruel of all is the muscle memory of a man that no longer exists silently mocking him from within. 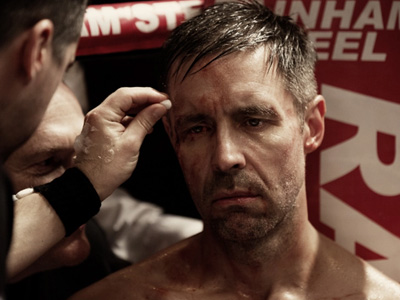 It packs a punch. It's a knockout. Boxing metaphors. Etc.


The journey, as it were, is deceptively simple: it's the story of Matty's accident, his recovery and his relationships. At first you might feel Journeyman is missing a dynamite last round, a theatrical flurry of fisticuffs before the bell. In actual fact, the film's ostensible lack of dramatic impetus differentiates it from its genre stablemates: despite a clear reverence to the sport and the communities it fosters, Journeyman isn't really about boxing at all, and cares not for theatrics. It's a straightforward story but familiar beats are delivered with hammer blows, courtesy of a staggering central performance from Considine that'll leave you in a daze.

You've never seen a Paddy Considine performance like this. For my money, it ranks as one of the most moving performances I've ever seen: tender, nuanced and indelibly moving, it had me on the verge of tears throughout. There is a scene, featuring Matty on the phone to his estranged wife, that still has me welling up thinking about it months later; despite his slurred speech and limited vocabulary, Considine somehow manages to deliver a dozen emotions at once - it's the sensational, emotional centrepiece of a movie that isn't afraid to tug on the heart strings to get your attention. Just watch BAFTA ignore it next year.

Journeyman is no one-hander; Jodie Whittaker is excellent as Emma, who struggles with her transition from Matty's wife to his carer. It's through her we learn most about what of Matty is left behind, including the dangers of what happens when a beast is put in a cage against its will. Journeyman takes a turn towards horror in its second act with a number of scenes that'll make your stomach flip, and though it steadies itself into something altogether more accommodating by its close, it lingers long enough on the terrifying concept of inherent violence laying dormant in masculinity. Whittaker handles such heavy scenes with aplomb, although arguably there's room in the movie for more of her own, equally moving journey. 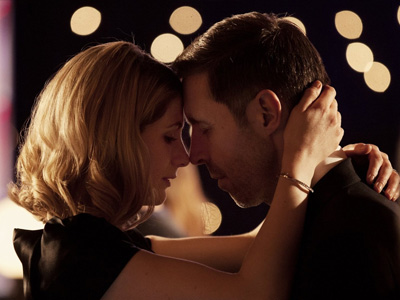 I haven't written photo captions for ages. Can you tell?


When on screen together, Considine and Whittaker are - and I say this at my own risk - a knockout. One early scene post-fight sees Matty return home, bruised and battered, before he slumps at the feet of his wife and bursts into tears. It's an unexpectedly raw display of emotion for a genre that usually prefers to puff out its chest, but Journeyman frequently seeks a different, braver path in order to dissect the male psyche; as filtered through career, through family and through friends. Don't expect much in the way of razzle-dazzle; Journeyman offers the gratification of watching a wound that slowly heals. Bravo to that. He might be bored of playing to empty rooms, but when he wants to Paddy Considine can still knock 'em dead.

More:  Journeyman  Boxing  Paddy Considine  Jodie Whittaker  Paul Popplewell  Anthony Welsh  Tony Pitts
Follow us on Twitter @The_Shiznit for more fun features, film reviews and occasional commentary on what the best type of crisps are.
We are using Patreon to cover our hosting fees. So please consider chucking a few digital pennies our way by clicking on this link. Thanks!