One of the major problems people seemed to have with Joe Cornish's Attack The Block was that the protagonists were essentially thugs – armed youths who kicked off the movie by mugging a nurse. It's a tough job to have audiences rally round such a loutish lot and requires one hell of a knack for character to win them over. Well, Tyrannosaur opens with the lead character kicking his own dog to death. Just imagine how hard Peter Mullan and Paddy Considine have to work to make amends for that.


Thankfully, they're up for some hard graft. Tyrannosaur is grim with a capital 'G' – an unrelentingly bleak catalogue of woe that lodges somewhere between your gut and your conscience – but it is hugely effective at making even the most unsympathetic characters believable. Considine, making his directorial debut, is not interested in having you empathise with his players, only in making them human. To that end, Tyrannosaur resonates deeper than any other film this year – it rams a metaphorical matchstick under each eyelid and demands you witness what happens when men and women reach their lowest ebb. It makes for uncomfortable but essential viewing.

Tyrannosaur is a tale of abuse – abuse of alcohol, abuse of the self and abuse of others. Peter Mullan expertly plays Joseph, the aforementioned canine-kicker, who explains his behaviour thus: "Because I'm a cunt". Widowed, living on benefits (which he nonetheless spunks at the bookies) and seemingly only able to function when intoxicated, Joseph is lost and, you feel, beyond rescue. He's the dregs of society – the ruddy-faced, violent drunk in the pub you avoid at all costs. But there's no avoiding him here. You're as stuck with him as he is with himself. 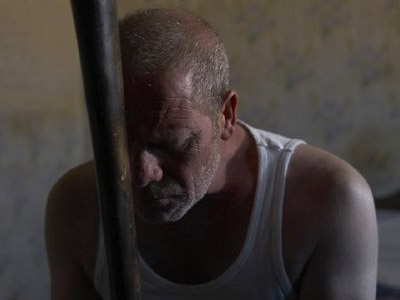 
Fate brings Joseph to the doorstep of charity shop worker Hannah, played by Olivia Colman. Hannah, a Christian and big on bible-bashing, seeks to save Joseph from an early grave, but hides secrets of her own, namely the physical and emotional torment she suffers at the hands of her cowardly husband, played by Eddie 'DIAL-A-CUNT' Marsan. The two begin a fractured relationship, first of circumstance, then of dependency, each clinging onto the other as they try desperately to keep their heads above water.

It's a kitchen sink drama, sure – but only if the kitchen sink was filled with piss and orphans' tears. Tyrannosaur is rooted in reality, but this is not Richard Curtis' Britain, or even Mike Leigh's Britain – it's the one right outside your window that you wish you could ignore, but you can't. Colman's scenes at home are gut-wrenching; acts of torture taking place behind frilly curtains and at the bottom of a nicely tarmacked drive. These domestic atrocities horrify because they're not underlined by a sympathetic score, but moments of mundanity – the dull hum of the washing machine, the terrifying click of a key in a lock. Eddie Marsan's wife-beater could live in your street. He probably does.

Peter Mullan, worry-lines cut decades deep into his furrowed brow, is predictably excellent: a picture of intensity; a powderkeg of repressed rage and suffering. Joseph doesn't necessarily deserve redemption, but Considine allows him moments of humanity (a friendship with a neighbourhood child, a sickly friend) and Mullan clutches every opportunity to give him depth and colour. 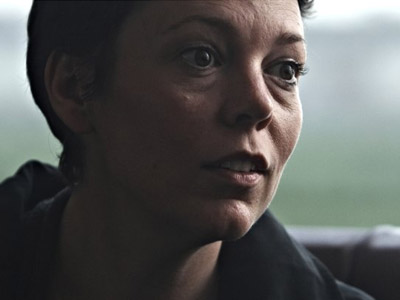 Give me a cuddle. For my sake, not yours.


But where Mullan has previous experience in playing self-destructive types (see: My Name Is Joe), Colman has a dramatic blank slate – and she smashes it. Best known for her Peep Show persona, Colman is the most disarming of presences – an outwardly jolly woman who hides a well of sadness within her. Considine's punishing close-ups frequently see her friendly veneer wobble; the mask slips, the voice breaks, the eyes well up. She gives a heart-breaking performance, swathed in sorrow, free of grandstanding and full of nuance – there's no doubt it's worthy of awards. I simply have no idea where it came from – it's a bit like discovering the guy who plays Super Hans has won the Nobel Peace Prize.

Credit to Paddy Considine, who's clearly just as big a talent behind the camera as he is in front of it. Adding layers to his original short, Dog Altogether, Considine has crafted a brutal, uncompromising, believable drama that won't fail to make you squirm – you may feel revulsion, you may feel pity, you'll most likely experience an intense melancholy that lasts for days, but you will feel something. Tyrannosaur is cinema that scars the soul – you'll only want to see it once, but once is enough.

No dinosaurs in it though, which is a bit crap.

More:  Tyrannosaur  Paddy Considine  Peter Mullan  Olivia Colman  Eddie Marsan
Follow us on Twitter @The_Shiznit for more fun features, film reviews and occasional commentary on what the best type of crisps are.
We are using Patreon to cover our hosting fees. So please consider chucking a few digital pennies our way by clicking on this link. Thanks!