The Beach Boys: squeaky-clean surfers, or the subjects of sordid sex scandals, substance abuse and psychotic breakdowns? Whatever your level of familiarity with these endless harmonisers and their incredible off-stage history – fatherly abuse, drugs, rivalry, death, links to Charles Manson, drummer Dennis Wilson falling out with lead singer (and cousin) Mike Love and then marrying his daughter – the chances are that you don’t know the whole history…. because, frankly, there’s just so much to tell. Any Beach Boys biopic just couldn’t possibly do justice to their entire 53-years-and-counting career. Thankfully, this new film focuses on band figurehead and recognised musical genius, Brian Wilson. And even then, it still feels like just a drop in the ocean.


Splitting and flitting between two distinct periods allows the film to tell arguably the two most important and fascinating aspects of the songwriter’s life. We see a young Wilson making savant-garde album Pet Sounds while his mental health starts to deteriorate and, at the same time, an older Wilson – his mind gone full-Kokomo at this point – falls in love with car dealer Melinda (Elizabeth Banks) while being exploited by his own doctor, bullying opportunist Eugene Landy (Paul Giamatti).

Obviously the real showcase here is the Brian Wilson story itself, as this film delivers a worthy biopic of a true legend heralded as a one-of-a-kind prodigy. And yet, along the way, it is Paul Dano’s captivating performance of the young genius that stands apart. With every mannerism, facial tic and reaction so utterly spot on, Dano perfectly captures Wilson’s passion, obsession, child-like wonder and goofy humour as he struggles to break away from the group’s sand, sea and fun, fun, fun typecasting to experiment with ever more complicated studio sounds, as well as LSD. 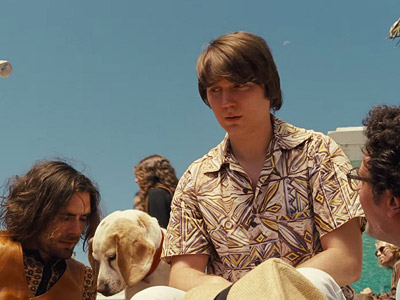 "Guys, I don't want to alarm anyone, but can everyone else see that dog?"


Lengthy scenes in which he excitedly adds hairpins to piano strings, or defends a decision to have session musicians play in different keys, might seem tailored for a specifically muso audience, but it all work towards convincing that Pet Sounds is an accomplishment like no other and for Wilson to have created this masterpiece at the age of just 23 is nothing short of astonishing.

John Cusack’s older Wilson, however, takes a little longer to be as enticing. In part, this is because Cusack’s performance simply doesn’t match Dano’s for sheer commitment. As a more bumbling, mumbling and occasionally twitchy middle-aged misfit, the older take on Wilson was always going to be the less attractive of the two, but he is just so recognisably ‘Cusack’ that, for the first 20 minutes, it is difficult to separate the actor from the man he plays. Even when his role in the film settles and his story becomes really compelling, the older and the younger Wilsons never quite match up. As such, these two narratives work as two completely separate stories rather than halves of a whole. 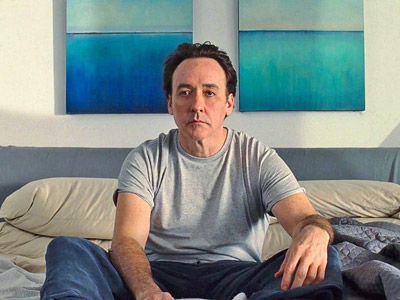 Ahahaha! That is sooooo 'Cusack'.


Otherwise, though, this film does a remarkable job of depicting Brian Wilson’s mesmerising life story through focusing on these two clear-cut eras. Some parts get short thrift, with his marriage to first wife Marilyn and his famously close friendship with his family bandmates feeling particularly under-explored at times, but it’s easy to see that these sacrifices have been made in order to fit so much else in.

Between a tempestuous relationship with his controlling father, the criticism he faced from the rest of the Beach Boys (most notoriously lead singer Mike Love) after Pet Sounds proved to be too much of a musical departure and a commercial flop, and his increasing mental instability, this film has a lot to pack in. But all of these serve to adequately explain both Wilson’s musicality and failing sanity, and the film is far more impactful as a result of focusing solely on these angles.

In doing so, the film is as reverential as you would expect too. Settings, scenarios and wardrobe are all reproduced with incredible attention to detail, while stage performances and home videos are mimicked exactly from their real-life counterparts. 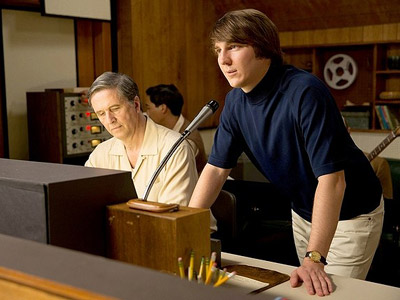 
If anything, this kind of hero worship in a film can sometimes be a drawback. In the same manner as other recent biopics like The Theory Of Everything or The Imitation Game, this film presents Wilson as a god among men, seemingly with an agenda to convince its audience of his genius in the same way that a documentary would, rather than give a well-rounded portrayal of a multi-faceted person. Brian Wilson was a terrible husband and father, we are told, off his face on drugs and booze, but we can't ever actually see this side of him.

But that's just the way these films work. This is a film that champions rather than fleshes out its subject, and deservedly so. With Brian Wilson’s – and the Beach Boys’ – amazing life history long gone under-represented on the big screen until now, this film achieves exactly what it set out to: providing proof that Brian Wilson really wasn’t made for those times. Or, indeed, these.

More:  Love Mercy  Brian Wilson  The Beach Boys  Bill Pohlad  John Cusack  Paul Dano  Elizabeth Banks  Paul Giamatti
Follow us on Twitter @The_Shiznit for more fun features, film reviews and occasional commentary on what the best type of crisps are.
We are using Patreon to cover our hosting fees. So please consider chucking a few digital pennies our way by clicking on this link. Thanks!