At two hours and 11 minutes, The Scorch Trials should have been a pretty meaty filler in the YA sandwich that is Maze Runner. But like its stablemates The Hunger Games and Divergent, once all the scene-setting and introduction to the new dystopian world has been done, we're just trying to munch straight through to the good stuff. Scorch Trials is basically a big block of cheese you can't quite sink your teeth into, but there's a promise of an interesting chutney coming up, or some particularly nice bread. It's a bit bland and won't leave you particularly hungry for more.


Assuming that you have a good enough memory to remember where the first film finished, we're thrust straight away into Thomas and company's bust from the World Catastrophe Killzone Department; as I understand it, no one realised the connotations of the acronym until after the stationery order had been sent. Missing his memories and suspicious of anyone over 21, Thomas leads a breakout from the complex he and his dudes are being held in after being rescued from the maze. Those mean grown ups are up to something, but before we can find out any answers as to why kids are being "harvested" and what the purpose of the maze was and Thomas's role in it, they're out into 'The Scorch', a desolate wasteland and busted-up city that uses the leftover sets from Insurgent. 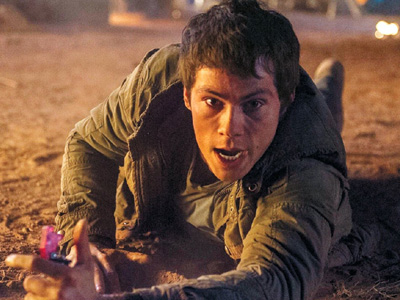 Movie in 'no screenshots interesting enough for funny caption' shock.


This is a trilogy that borrows heavily from not only other YA films, but every other popular trope lying around. We've got zombies like The Walking Dead! We've got running up buildings like The Last Of Us! We've got a political resistance with no clear aim like Hamas! And we've got more questions asked than Neo in The Matrix Reloaded! Despite the bum-numbing running time, every new character Thomas and his nameless mates encounter exclaim, "There's no time to explain, we have to go!" You know that supercut on YouTube of every time this has been said on film? Scorch Trials is that, on a two hour loop.

There's also little time given to reintroducing some of the characters that barely made it from the first film. We know Thomas and Theresa, and that guy from Game Of Thrones, but the supporting cast are essentially the red shirts from Star Trek, just there to be dispensed with to provide some sense of jeopardy. At one point, the boys reminisce about their fallen numbers; "Aww, do you remember Chuck? And Winston? They were definitely here." No, I do not remember them; I don't even remember what my life was like before I started watching this film. At one point, Theresa tells Thomas a story about her mother slowly turning mad to the point she plucked out her own eyeballs. After two hours and 11 minutes, I knew what she was going through.

Which is a huge shame because the first instalment was so promising. Dylan O'Brien was a fairly charismatic lead when all he had to do was jump around the maze, but now he's given precious little to do other than run and look a bit out of it. Theresa (Kaya Scodelario), whose appearance in the maze set the whole chain of events into motion, is literally carried throughout by the boys and her relationship with Thomas, both before and after the maze, is not explored. A brief flirtation between Thomas and resistance fighter/soon-to-be- zombie Brenda has little consequence; why should he or anyone give a fuck about Theresa? Why should we give a fuck about anything, for that matter? 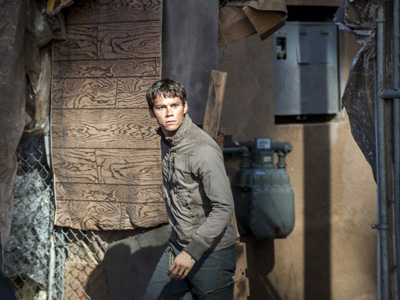 
Instead of anything like, I don't know, a plot or some answers, we get a lot of sand, a lot of running, some good explosions and Alan Tudyk popping up as a camp club owner who is the dystopian modern day equivalent of the Child Catcher. We also now live in a world where we can go no longer than five minutes without anyone from Game Of Thrones being on screen; three pop up in Scorch Trials - Thomas Brodie-Sangster, Nathalie Emmanuel and Aiden Gillen, still in search of an accent to call his own.

Even if you've read the books, you won't be any the wiser as early on director Wes Ball dispenses with the original story. That in itself was guilty of dropping such heavy hints that the climatic reveal was barely a surprise, so which way it goes now is anyone's guess. 'The Scorch Trials' is a pretty big clue as to what might have been going on, but maybe Ball has stolen another march from GOT and just decided to go beyond its original source material? In line with the unsubtly titled evil corporation WCKD, Ball's follow up is DSAPPNTNG.

More:  Maze Runner The Scorch Trials  The Maze Runner  Wes Ball  Dylan OBrien  Kaya Scodelario
Follow us on Twitter @The_Shiznit for more fun features, film reviews and occasional commentary on what the best type of crisps are.
We are using Patreon to cover our hosting fees. So please consider chucking a few digital pennies our way by clicking on this link. Thanks!