Miles Ahead is obviously an awful punning title for a Miles Davis biopic, like "The Biggie They Are, The Harder They Smalls" or something. Or so I thought until someone told me it was the name of one of his albums, which reveals how much I know about jazz and how much Miles Davis knew about good puns.


Still, no one actually likes jazz, do they? They might have it on at home and be dimly aware that it hasn't stopped yet, make sure they turn it up a bit when the phone rings, but no one actually bloody likes it.


Miles Davis, though, there's an interesting bloke. Don Cheadle's gone so far as to write, direct, produce, star in and probably do the lunches for a film about him, so it would of course be brilliant if he too was only pretending to like jazz and he'd really gone all-in on it to impress a girl. But we'll give him the benefit of the doubt. Here he's thrown together an admirably concise (this sort of self-indulgent labour of love is usually far too long) and funny snapshot of the man's being, resisting the temptation to tell his whole life story in favour of showing us a couple of days from his coked-out seventies period, anchoring flashbacks to the forties.

Funny is the key word: I expected this to be reverential; a cautionary tale of genius brought low by drugs and demons, but it's frequently a hoot. Ewan McGregor's Rolling Stone journalist Dave Braden pitches up at the jazz legend's New York apartment wanting an interview, and gets a smack in the gob and a wild goose chase for his trouble. Miles is refusing to hand over his new album because the record company owes him money, and he's holed up at home doing lines and regretting a lost love. His various transgressions – like pulling a gun on a record company executive – are played often for laughs in the seventies sections, leaving the more serious bits to 1945.

Miles wasn't a nice guy in 1945. He made his wife give up her dancing career, seemingly because he didn't like the idea of her earning her own money, and Cheadle's not shy of showing us these flaws, far more candidly than the glossed-over approach 2014's Get On Up took to James Brown's domestic violence. There's a heavy dose of caricature in his performance, but he sinks deep into it. Less of a recognisable figure and media personality than other actors, he allows you to forget the man behind the character in a way, say, Will Smith as Muhammad Ali (for which Cheadle also auditioned) denied you. There's an atmospheric realism to the music, too, with all the valve-tapping imperfections of a trumpet played in a basement dive bar enveloping you like so much casually inhaled second-hand smoke. 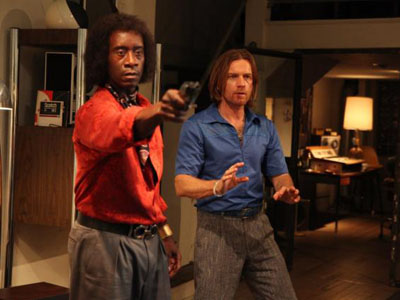 Watch out, Cheadle's about.


Whether all of this really gets you to the man himself, who can say? No one's done anything other than read his Wikipedia page and tactically position a few charity-shop-bought LPs on the coffee table anyway. In a way this is all surface-level sheen with a sense of humour and, while it doesn't make for the most satisfying experience you'll ever have, more power to it: the sort of earnest approach taken by most biopics ("This guy had a difficult childhood! Genius is often self-destructive!") would've produced something for Davis completists to mull over but the rest of us looking at our watches. Just as the war movie makes the most hay by focusing on the anomalous story of one platoon, the biopic comes alive when it tells a story on a micro-level, like the underproduced but charming TV movie Two Of Us, about Lennon and McCartney's final meeting. Miles Ahead is nothing anyone's going to fall in love with, but something interesting in its approach to stroke your goatee to, like those jazz albums you pretend to like.

More:  Miles Ahead  Don Cheadle  Ewan McGregor  Michael Stuhlbarg  Emayatzy Corinealdi  Keith Stanfield
Follow us on Twitter @The_Shiznit for more fun features, film reviews and occasional commentary on what the best type of crisps are.
We are using Patreon to cover our hosting fees. So please consider chucking a few digital pennies our way by clicking on this link. Thanks!