I hold a special kind of contempt for people who indulge themselves in reviewing things that are blatantly not meant for them to enjoy; people who take pleasure in sticking the boot into something that is clearly aimed at a different demographic. I'm thinking the petulant one-star reviews of Kanye West's Glastonbury set, or Mark Kermode secretly enjoying giving the Entourage movie a kicking - everyone knows Kermode would rather stay at home watching The Exorcist with one hand in a pot of pomade and the other down his pants. You wouldn't send a Danny Dyer fan to review a Michael Haneke film, so why is the opposite true?


It's unclear who benefits from this approach. It feels a lot like punching down. Though it might be hard to find a self-respecting critic who might be interested in Entourage (scratch that: a self-respecting human being), I can't help but think publications need to cater for wider tastes when they review new releases. Like kids movies, for example. You can set your Observer critics and Variety hacks on a movie like Minions all you like, but it's aimed at little people, who are less discerning, have lower standards and usually some sort of dried foodstuff around their tiny, smiling mouths. 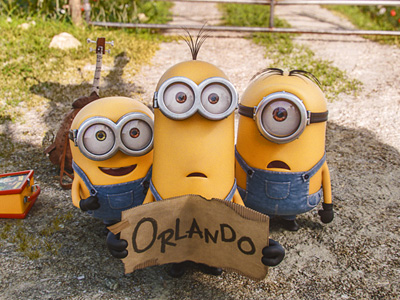 
I am much more interested in what a kid thinks about a kids movie than what a jaded, 52-year-old man thinks. This is not about giving family movies a free ride (parents have to pay for the tickets and sit through the duration), but recognising that it's okay for filmmakers to aim a film at a particular audience without fear of alienating the others.

I have a two-year-old son, Arthur, and he's getting to the age now where he's old enough to be fed into the movie marketing machine: if he sees an advert for a film on TV or in one of his magazines, he's going to want to see it until I can't bear hearing about it any more. This last month has been Minions Minions Minions Minions Minions. Interspersed with the occasional Banana. Last weekend, my wife and I relented and took Arthur to see Minions at a morning screening at the local cinema, the first time we've taken him to a non-Parent & Baby screening. For a family of film fans, it was Kind Of A Big Deal.

To mark the occasion, I thought I'd wait until the film had finished and canvas Arthur's opinion on Minions. My thoughts on it are irrelevant, but having spent upwards of £40 on tickets and snacks for the experience, I was keen to know if he enjoyed himself. Take it away, boy!

: Arthur, what did you think of Minions?

: What was your favourite bit?

: What was the funniest bit?

: What about the Minions? Which ones were your favourites?

AG: [unintelligible] Five on the road. The road.

: Do you think they should make another Minions film?

At this point in the interview, Arthur requested we continue watching Curious George. Before I relented and un-paused it, I tried to sneak in one more quick question to legitimise this review.

: Arthur, how many stars out of five would you give Minions?

AG: Five. Four. [Not really paying attention] Five and four.
Let's call it a four. Which is the same score that Mark Kermode gave it. Was this a worthwhile experiment? All I know is that it cost me £41 for the experience and my son isn't bothering me about Minions any more. That sounds about right. Next week: Arthur reviews Entourage.

More:  Minions  Despicable Me  Kyle Balda  Pierre Coffin  Sandra Bullock  Jon Hamm
Follow us on Twitter @The_Shiznit for more fun features, film reviews and occasional commentary on what the best type of crisps are.
We are using Patreon to cover our hosting fees. So please consider chucking a few digital pennies our way by clicking on this link. Thanks!