If it wasn’t immediately obvious from the impenetrable wall of dialogue that looms over the opening scene, Molly’s Game was written by famed fast-talker Aaron Sorkin. If it wasn’t immediately obvious he directed it too, the clues are there to be found: scenes that smash cut through shot lists like a machine gun play home to worldly and wise characters who spew dictionaries of insightful dialogue. Molly’s Game is adapted from the biography of a poker hostess who ran high stakes games for big game players, but the movie has more of Sorkin’s fingerprints on it than his own typewriter. Often if a writer-director can’t remove their own ego from the equation it can be problematic, but thankfully the story of Molly’s Game feels tailor-made for Sorkin’s style: though occasionally weighed down by sheer volume of dialogue, it’s nonetheless smart, slick and - thanks to a towering Jessica Chastain performance - more than a bit sexy.


Chastain plays Molly Bloom, a former athlete who finds herself running errands for a Ratner-esque Hollywood d-bag before graduating to the glamorous world of underground poker, where movie stars, hedge fund managers and all-round awful rich guys are free to spunk their money up the wall. Bloom comes out fighting when she’s arrested by the FBI two years after organising the games, now something of a minor celebrity herself, and recruits Idris Elba’s character, Righteous Q. Lawyerman, to represent her in court. It’s all based on a true story, but it mirrors Molly Bloom’s book, in that her good name is deemed more valuable than the payday she’d get by naming names. Therein lies the movie’s moral core: greed is good but integrity is priceless.

Like most movies about poker it’s a movie that’s incredibly impressed with itself: despite the fates that befall almost every character involved, the aesthetic Sorkin aims for is one of sex and glamour. Molly’s drug use is barely referenced and characters left destitute are abandoned off-screen - poker is depicted as a sport of high class, high risk and high reward. It requires some knowledge of the game to appreciate the stakes (characters are forever talking about Molly “taking a rake” like we’re supposed to know what the fuck it means) but the exposition and literal diagrams provided don’t always pass muster. Perhaps a little tongue-in-cheek fourth wall breaking was needed to lighten the portentous tone, a la The Big Short; instead Sorkin spends too long talking about his cards instead of showing them. He also has a habit of having characters stare out of high rise windows to deliver bizarre non sequiturs like “Do you know what the center of the universe smells like?” before painstakingly looping round to get back on topic. You wonder if a more judicious editor than one appointed by himself could have tidied the edges of Sorkin’s screenplay a little. Silence is not his strong point. 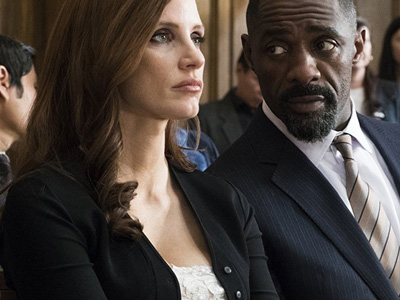 
Predictably, Jessica Chastain is the best thing in Molly’s Game by a mile: this is the kind of role she excels in - strong, independent, intuitive women who get backed into a corner. There are a few similarities with her character in this year’s earlier thriller Miss Sloane, where she played another alpha-female type; unlike Sloane, Molly is at least flawed, but Chastain rarely plays helpless. She reminds me a little of Scarlett Johansson in that she gravitates towards roles that suit her style: laser-focused, quietly confident, unflappable women who are out to prove their worth. This means the resume doesn’t carry all that much variety, but the effectiveness of Chastain’s performance - and her ability to lift a scene with her very presence - is undeniable. Also, if you like nice dresses, this movie has a Jessica Chastain wearing the absolute shit out of about 50 nice dresses. Kudos to the exhausted costume department.

Somehow, Kevin Costner has been allowed to steal the show with a tear-jerking scene in the last act, his best big screen dadwork since he let Superman kill him with a hurricane. It’s in this scene, with Costner confronting his estranged daughter, where Sorkin hits his sweet spot: unshowy dialogue delivered with heart and purpose, notably a world away from the bullshit grandstanding world of poker. Such top Costnering does rather distract from the movie’s core message, that Molly’s MO is that she lives to control powerful men - in hindsight, it’s only the actions of three powerful men in her life (lawyers, judges, father figures) that give her the ending she seeks. On balance though, given the shit-shower of male specimens she deals with - including an effectively weedy Chris O’Dowd and quietly devastating loser Bill Camp - Molly and Chastain still emerge as the aces in the deck.

More:  Mollys Game  Aaron Sorkin  Jessica Chastain  Idris Elba  Michael Cera  Poker
Follow us on Twitter @The_Shiznit for more fun features, film reviews and occasional commentary on what the best type of crisps are.
We are using Patreon to cover our hosting fees. So please consider chucking a few digital pennies our way by clicking on this link. Thanks!