As the jovial opening number points out, the Muppets are back, by popular demand. Because that's what they do in Hollywood, even if everybody knows the sequel's never quite as good. Nevertheless, the studio considers them a viable franchise. The tune, happily poking fun at Hollywood's fascination with sequels, is just one of the many self-depreciating, self-aware gags that litter this sequel.


Given the monumental success of their last outing, a new Muppets adventure was to be expected. The fans are back on board. Now, how to keep them interested? With a fresh spin on the 1981 Great Muppet Caper, that's how. Following their triumphant reunion show, the Muppets are at a loose end and left looking for a half-decent sequel idea. While Kermit wants to hone the show, Ricky Gervais' international tour manager Dominic Badguy (pronounced 'Badjee') convinces the Muppets to embark on a world tour.

Unbeknownst to them, however, Dominic is working for Constantine – a criminal mastermind and Kermit the Frog lookalike. With Kermit replaced, mistaken for the evil frog then shipped off to a Siberian gulag, Constantine and Dominic orchestrate an elaborate European crime spree. Meanwhile, the rest of the Muppets cluelessly go along with it, oblivious to any wrong-doings or Kermit's new Russian accent. 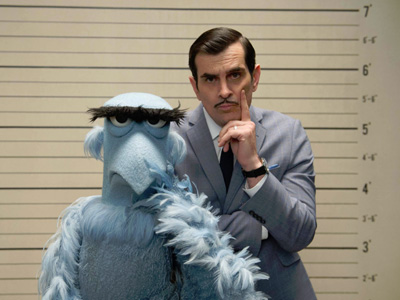 A Muppet, yesterday. Pictured with Sam the Eagle.


Back in 2011, Jason Segel revitalised the Muppets and made them relevant again, and it worked out oh so perfectly. With help from co-writer Nicholas Stoller, director James Bobin and Bret McKenzie behind the piano, he crafted a clever, heart-warming story that put the nostalgia of all things Muppet front and centre. Everyone involved shared a mutual love for the fuzzy critters and it showed on the screen. The reboot resonated with young newcomers as much as it did the older generation.

But as Kermit and Fozzy cleverly predict in their opening song, this transcontinental sequel, sadly, just isn't quite as good. The world tour/jewel heist story, written by Stoller and director Bobin, harks back to the golden days of classic Muppet capers, crammed with all manner of japes and silly jokes you've come to expect. But the departure of Jason Segel in front of and behind the camera has left a very manly Muppet-shaped hole.

Without Segel or Amy Adams, Most Wanted is missing that engaging bond between humans and Muppets. Ty Burrell comes closest as the Clouseau-like Interpol agent Jean Pierre Napoleon who teams with Sam the Eagle's CIA agent. But Tina Fey - as a Kermit-infatuated Gulag officer - misses the mark despite a brilliantly surreal song and dance routine with Danny Trejo, Ray Liotta and Jemaine Clement prancing in the background. 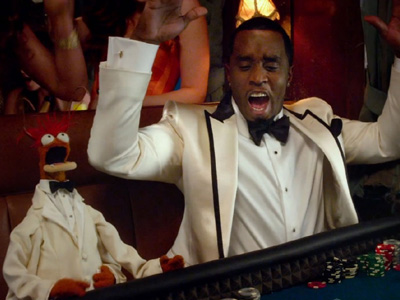 Still, this happens, so how bad can it be?


Ricky Gervais comes off the worst. Funnier in his two-minute deleted scene from The Muppets, he spends his time trying desperately hard not to overshadow his co-stars and come across too 'Gervaisy'. Keep an ear out for that collective groan in the cinema when he does the Brent dance.

Keeping with the Muppets tradition, Most Wanted is chock-a-block with celebrity cameos. Thanks to the world tour angle, we get Christoph Waltz waltzing in Berlin, Salma Hayek doing, erm, something with Gonzo in Madrid, and in Dublin, Saoirse Ronan does a bit of ballet. It isn't explained why. But soon enough the stream of famous faces popping up as glorified extras becomes all too distracting. It seems Disney is just fulfilling promises they made for the last film.

Despite a few flaws, Most Wanted is still a funny, daft Muppets movie and for that reason alone it deserves your attention once again. You'll still giggle at the subtler things, like Walter's collection of fine knitwear and a particularly touching gag involving Robin the Frog. And while Bret McKenzie's soundtrack doesn't quite strike the same chords as 'Life's a Happy Song' or 'Man or Muppet' there's enough to keep you happily humming along.

To be fair though, Kermit and co did warn you it wouldn't be as good.

More:  Muppets Most Wanted  James Bobin  Ricky Gervais  Tina Fey  Ty Burrell  Kermit The Frog  The Muppets  Jemaine Clement
Follow us on Twitter @The_Shiznit for more fun features, film reviews and occasional commentary on what the best type of crisps are.
We are using Patreon to cover our hosting fees. So please consider chucking a few digital pennies our way by clicking on this link. Thanks!