WWE setting up a film studio is a fairly natural progression. It's been a conveyor belt to throw stars like Stone Cold Steve Austin and John Cena into cash-in action films, and now here it is with splatterfest No One Lives, featuring a minor role for wrestler George Murdoch. Fine by me, but remember when the wrestlers would do those promos to camera where they shouted angrily about the bodily harm they were about to do their opponent? Well, imagine a film in which everyone spoke like that throughout, then at some point came face-to-face with their own small intestine. Yep, you're there.


Not that No One Lives is unengaging: it has some great, creative murders in it, and in Luke Evans' 'Driver' it has a convincingly relentless protagonist. But Christ, the dialogue is hard work. Because most of the characters are members of a BADASS criminal road gang, who dress all in black and do BADASS criminal shit, they of course have to talk appropriately. And so every line of dialogue is spat out or shouted, and every sentence punctuated by FUCK and MOTHERFUCKER and I'm a BADASS so I talk like a FUCKING BADASS all the FUCKING time.

This was among my favourites:

In fairness, they're under a bit of stress: they've messed with the wrong guy, thinking the Driver an easy target, and he's laying siege to the house they're holed up in, picking them off in increasingly grisly ways.

There's no problem at all with the premise, and in fact there's an excellent midway twist which I won't spoil even though the trailer does, but the fact that the victims are so horribly one-dimensional makes for a jarring watch. If there's a cliché to conform to, they'll give it a go, and shout while they do it. Flynn (Derek Magyar) in particular, the hot-head of the group, is unbearable: the kind of movie bad guy whose character is entirely free of shades of grey. Everything he does is violent or aggressive because he's BAD. When the Driver and his girlfriend sit down for a meal in a restaurant, Flynn comes over to talk threateningly to them, just because he's BAD. 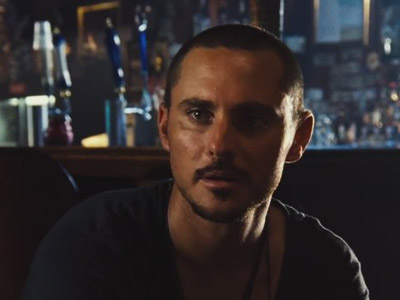 You know the kind of movie bad guy who goes to buy a sandwich, glares at the cashier then wordlessly slams the cash down because he's SUCH A BAD GUY? That's Flynn.


It's arguable that bitching about unlikeable characters misses the point of No One Lives. The audience with whom I watched it - far more horror-literate than I - lapped it up, finding a lot of humour in each outlandish killing. If this sounds like a criticism that they enjoyed it on a baser level, it's not supposed to: unlike mainstream releases like The Conjuring (which, predictably, I really enjoyed), this is a film for true horror fans. That doesn't mean an audience that doesn't care about characterisation or can't identify flaws in it; it just means one that can happily overlook them because they're looking for something else in the film.

No One Lives is satisfyingly full of flying guts and blood splatter, but for me its characters are so one-note that it's too much of a distraction. And ultimately the traditional horror morality by which you only die if you at least vaguely deserve to is all over the place, too: even the peripheral gang members who never wronged the Driver get the business end of one sharp implement or another. Then again, 'Only One Person Lives' isn't much of a catchy title.

More:  No One Lives  Luke Evans  Adelaide Clemens  Lee Tergesen  Derek Magyar  America Olivo  Beau Knapp  Lindsey Shaw  George Murdoch  Laura Ramsey  Ryuhei Kitamura  Horror
Follow us on Twitter @The_Shiznit for more fun features, film reviews and occasional commentary on what the best type of crisps are.
We are using Patreon to cover our hosting fees. So please consider chucking a few digital pennies our way by clicking on this link. Thanks!