Pacific Rim isn't a monster movie. Don't let the presence of giant man-made robots fighting gigantic hellbeasts fool you. What Guillermo del Toro has done with Pacific Rim is what no other filmmaker has done in the creature feature genre for decades – take a bona fide B-movie concept with a triple-A budget and make it matter. In just a few minutes of pre-credits back-story, del Toro paints a picture of a changed world that hangs in the balance: the arrival of 25,000 tonne monsters from another dimension, the cities that fell, humanity's response, the inevitable false dawn when we started winning. That neat set-up acts as a pre-bout bell ring, but when Jaeger eventually meets Kaiju on the Pacific Rim battlefield, it doesn't feel like a mere monster movie – it feels like a goddamn war film.


With the future of mankind at stake, it's time to admit size really is everything. The scale of Pacific Rim is nothing short of staggering – not just in the dizzying battle scenes, but the scope of the entire concept. Del Toro knows you can't make a movie about the extinction of humanity without touching every base, and Pacific Rim touches on the personal, the geo-political and even the inter-dimensional. It's the kind of blockbuster World War Z wishes it was: one that invites the tossing back of popcorn but has aspirations beyond being the most special effects-filled movie of the summer. Pacific Rim is so technically accomplished, it's an Oscar shoo-in; it's so rich in potential it deserves to spawn a whole rim of sequels; it's so ridiculously over the top there's absolutely no excuse for not having fun. 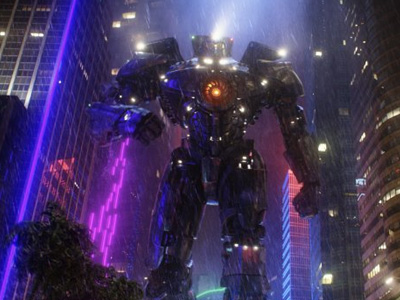 It's the future. Everywhere is purple now. Deal with it.


In fact, I can easily see Pacific Rim inspiring the same kind of devotion in fans that so obviously informed Guillermo del Toro. Godzilla for a new generation? I can stretch that far if you're after a poster quote. It's certainly a more confident beast than Cloverfield, The Host and any other half-decent monster movie from the last few decades. Frankly it makes the dull clanking of Transformers look like boys playing with their toys.

Though the bare bones of Pacific Rim might invite comparisons with Michael Bay's robotic oeuvre (note to self: potential name for your garage band), there's much more going on than metal clashing with metal. For starters, the human characters don't feel disposable as usual. Ron Perlman makes his customary appearance as the halfway house between man and monster, while Rinko Kikuchi brings a fresh eye to the end of the world. Idris Elba gets the plum role, at least in terms of general badassness – Stacker Pentecost (surely the name of a supermarket shelf-filler in an alternate universe) marshals the troops, speaks in gruff tones and delivers an apocalypse-cancelling speech that makes Bill Pullman's Independence Day orator look like Gareth Gates. 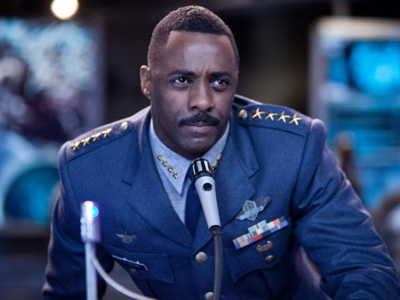 "Clean up on aisle six."


If the tone feels a tad portentous as a result, well, just remember Matthew Broderick dicking about feeding Godzilla fish and I'm sure we can all agree this sort of movie works better when you at least try to take it seriously. This is where Del Toro gets a leg up on the competition, because when it comes to men versus monsters, he genuinely cares. It is obvious from every high fidelity frame and over-saturated shot that Del Toro has poured his heart and soul into Pacific Rim. The design work is unparalleled, on both Jaegers and Kaiju – all terrifyingly impressive beasts, dredged from the deepest corners of his brainwrongs. Watching them kick the shit out of each other is like poetry in motion.

Pacific Rim has more money shots than James Deen's sizzle reel, features the most city-wide destruction since Superman 'saved' Metropolis and strikes the perfect balance between brainless fun and serious geek fodder. Unless The Lone Ranger has grown a pair of ten-tonne testicles since he was on the radio, Pacific Rim will go down as the year's ballsiest blockbuster – a movie for whom 'Go big or go extinct' isn't just a tagline, but a reason to be.

More:  Pacific Rim  Guillermo Del Toro  Charlie Hunnam  Idris Elba  Rinko Kikuchi  Charlie Day  Burn Gorman  Ron Perlman
Follow us on Twitter @The_Shiznit for more fun features, film reviews and occasional commentary on what the best type of crisps are.
We are using Patreon to cover our hosting fees. So please consider chucking a few digital pennies our way by clicking on this link. Thanks!