"But every Paul WS Anderson movie is a disaster movie!" I hear you cry. How very droll. Pompeii is indeed the first movie by director Anderson that's supposed to be a catastrophe - a further step away from sci-fi trash towards period drama following 2011's re-stab at The Three Musketeers. Titanic is the obvious template (love across a class divide against a backdrop of massive loss of human life), but Pompeii has more in common with your BBC1 Saturday afternoon adventure mini-series: it's a curiously bloodless affair, with pretty faces, mild peril, swords, sandals and really rather fetching costumes. Look at that image above and tell me you can't imagine the continuity guy announcing that the next thrilling episode of Pompeii is coming up after Final Score with Gabby and Garth. This is basically my way of telling you that it isn't very good.


You know Pompeii is going to be of a certain quality from the off, when it opens with a few portentious lines from Pliny the Younger over a sub-Enya soundtrack, then segues into a scene with evil Senator Kiefer Sutherland doing a British accent ("Kill them! Kill them awl!") and murdering up the joint. I daresay if everything in Pompeii was pitched with the same level of manic energy that Sutherland adopts (i.e. 100 decibels too loud and 6,000 miles too West), it'd at least be enjoyable for the wrong reasons; as it is, Pompeii is clumsy, unoriginal and – a cardinal sin for a disaster movie – boring. You'll see nothing Ridley Scott didn't do better a decade ago and nothing 300: Rise Of An Empire didn't do with more style six weeks ago.

With the recent success of the Spartacus: Blood & Tits series, not to mention the vast plaudits earned by fellow sword-swinger Game Of Thrones (with which Pompeii shares a lead in Kit Harington), it's a shame Anderson's epic feels so gutless. Fights are brutal but not a drop of blood is shed. Conflict is undercut by ruthless editing. Men are sold as sex slaves with nothing more than a raised eyebrow to show for it. Worst of all, the eruption of Mount Vesuvius – aka The Bit You'll Wait 45 Minutes For – is kind of underwhelming. 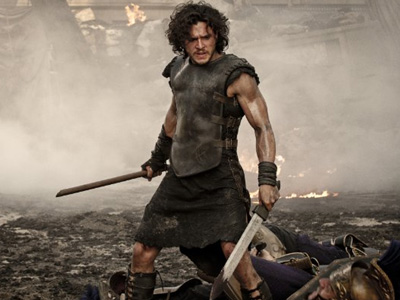 Run! He's got a wooden sword with poo on it!


Despite being set against the backdrop of one of the most terrifying natural disasters ever, Pompeii feels decidedly small scale. You want Vesuvius to rattle your teeth; you'll hope to feel the burn through the screen. Sadly all you get are some special effects that could have been borrowed from Roland Emmerich's 2012, or to a lesser extent, Tommy Lee Jones' Volcano. Perhaps the relative lack of budget undersells the epicness that Anderson was aiming for: everything feels stagey and theatrical. It must have been difficult to write a meaningful script where Vesuvius was anything other than big foreboding Act 2 waiting to explode into life. Characters can't interact with it or even really reference it. The likes of Titanic and Poseidon and The Towering Inferno were giant metaphors for the human condition; Pompeii asks that you endure an adjacent plot while you wait for the main event.

Harington is an interesting choice for the lead role, a gladiator known initially as 'The Celt' and then later by his given name, Milo (pro tip, champ: stick with 'The Celt'). If Jake Gyllenhaal in Prince Of Persia and Orlando Bloom in Kingdom Of Heaven had a baby and that baby grew up to take acting lessons from Ryan Gosling in Drive, it'd be weird, but a vague approximation of what Harington achieves here: a moody dude from whom less is more, except when it comes to clothing that covers the midriff. Of course, he may be a bloodthirsty gladiator, but he has a sensitive side too – he's literally a Horse Whisperer. "Hey girl," he seems to say. "I can beat up that bully and tame your pony. And did I tell you about my tragic back-story yet? Because I have one of those too." 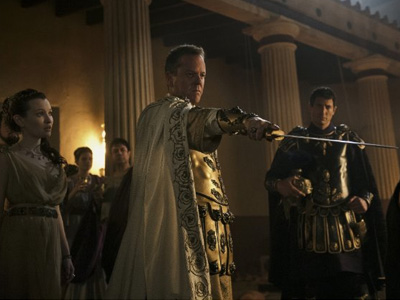 "I am Senator Corvus, and this is the longest sword of my life."


Returning to the (totally unfair but entirely warranted) Titanic comparison, the reason you felt attached to Jack and Rose when everything went rudder up was because James Cameron insisted on a lengthy runtime in which you could suitably invest in their romance. Pompeii is 104 minutes long and the two leads barely spend any time together before they're declaring their undying love for one another and risking their lives under the shadow of the volcano for one more moment in each other's company. It is no exaggeration to say that Cassia literally doesn't even bother to learn Milo's name, let alone get him on the back seat of a sweaty old car for some rumpy Pompeii.

Furthermore, there are a series of odd character beats; scenes that feel mechanical, that show the workings of a first draft in pencil underneath the ink. Harington puts aside his film-long vendetta and hands over the dispatch of his mortal enemy to another man for no reason except that the story dictates he be the one to defeat the main antagonist elsewhere – and he doesn't even do that. One scene sees Milo risk his life for an illicit horse ride which lasts all of two minutes, after which he turns himself in. 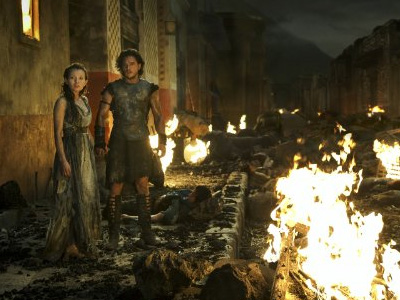 
Inconsistencies further hamper your enjoyment of what should be a guilty pleasure. Stab wounds vary in intensity. Sometimes ash clouds envelope sections of the city in seconds; sometimes they can be outrun on horseback. There are quiet character moments mid-explosion, including one bizarre 'calm at the centre of the storm' scene, which is mad, because the eruption of Mount Vesuvius was the equivalent of 1,000 Hiroshima bombs, and the next cut is back at full destruction anyway. I might be wrong, but I'm pretty sure there's a big burly baddy who goes missing halfway through the movie. And I'm no historian, but I'm pretty sure even the angriest Romans wouldn't call a woman a "bitch"; just one of many thoughtless script anachronisms that gnaw away the movie's fun factor.

(There is one moment, however, which had me in stitches. After the volcano erupts and the sky is raining small rocks, there's a scene where an extra ever-so-slightly draws focus from Harington by stepping onto his mark. Just as you start thinking "Who the fuck is this g-" he gets bonked on the head by a cricket ball-sized rock and drops like a sack of shit. Whether or not this was an intentional moment of comedy I have no idea, but he's easily the equal of Titanic's 'propellor guy'. But I digress. On with the review).

Oh, actually, I've finished. In summary: don't go and see Pompeii because of all the reasons I just listed.