As my grandfather used to say, if there's one place it's wholly appropriate to wade into the American gun debate, it's in a UK-based review of an action blockbuster. Much as I'm not keen on the things myself, it's often ignored in media reporting over here that the Second Amendment right to bear arms is supposedly the American's last defence against tyranny, either by his government or by foreign invaders, and this is why many of them consider it so important. Red Dawn, then, is pretty much a Republican's wet dream.


A remake of the 1984 Patrick Swayze actioner, this is the story of a gang of teenagers who form an impromptu militia when the US is invaded by North Korea. The premise is inherently daft insofar as Kim Jong-un's boys don't have anything like the capability to stage such an invasion, but it's interesting how Red Dawn uses the secrecy surrounding North Korea to make the scenario convincing. This sort of foreign aggressor plot usually calls for a fictional country to be invented, but whatever: MGM probably aren't looking to crack the North Korean market any time soon. They're more mindful of Chinese sales, which is why the original idea to use China as the invaders was revised in post-production to insert villains everyone can apparently agree upon. 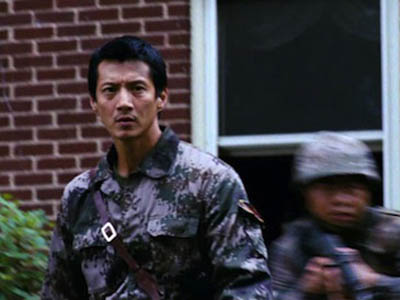 American-Korean actor Will Yun Lee, who energetically researched the Chinese military in preparation for his eventual role as a North Korean army captain.


Red Dawn champions a sort of do-it-yourself survivalism, inhabiting the same post-apocalyptic landscape as recent TV shows like Falling Skies or The Walking Dead. I counted eight minutes to establish the characters before the air strike started: Chris Hemsworth's Jed Eckert is a US Marine, so we know he'll be fairly tasty in a scrap, and his kid brother Matt (Josh Peck) showboats and costs his team a game of football, so obviously he's got a journey to go on. This isn't enough to make us care about them straight away, but the surprise is in how effectively this is achieved later.

Because what follows is the simplest painting of black and white lines of good and evil, and somehow it works – and works gloriously. Retreating to a forest cabin and then further into the hills, the group are first invested with a lot of recognisable emotion, all conveying grief and loss with little reliance on histrionics, then decide to fight back and begin the customary training montage. They develop as characters quickly through this stress on them as a unit, and the action scenes that follow are shot through with the unrelenting sense that they're in actual danger of death. Hands up who felt that for a second during A Good Day to Die Hard. 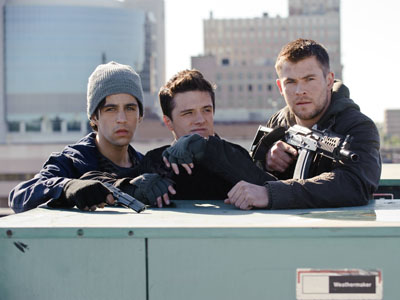 When One Direction eventually fell out of favour, things got ugly.


The sound does a lot to reinforce this sense of jeopardy, with bullets zinging past your ears every three seconds and thudding into walls, and many of the kids don't ever seem to get comfortable handling their guns: a constant reminder this is a bunch of amateurs in over their heads. And while it's no surprise to see action shot with shaky hand-held cameras, there's great credit in how controlled it all is, never letting you get lost in the maelstrom. Director Dan Bradley, one of the most sought-after stunt coordinators and second-unit directors going, knows how to shoot a car chase and a gunfight.

Red Dawn is not a dumbly jingoistic flag-waver as its promotion suggests; it's more just interested in using simple evocative concepts – home, freedom, and so on – to achieve its ends. Those ends are making you invest in its characters, giving them a recognisably dangerous enemy to fight, and thrilling the shit out of you while they do it. And while you'll find no one queuing up to tell you it's an intelligent film, it avoids its obvious potential pitfalls, like the racial stereotyping I half-expected would blight it, and ticks every single box an action movie should.

So remember, guys: the only thing that stops a bad guy with a gun is a good guy with a gun. Or, you know, a rigorous system of pre- and post-purchase mental health checks backed up by proper education about responsible gun ownership, whatever.

More:  Red Dawn  Dan Bradley  Chris Hemsworth  Josh Peck  Josh Hutcherson  Adrianne Palicki
Follow us on Twitter @The_Shiznit for more fun features, film reviews and occasional commentary on what the best type of crisps are.
We are using Patreon to cover our hosting fees. So please consider chucking a few digital pennies our way by clicking on this link. Thanks!