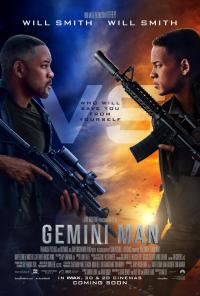 Gemini Man, to its credit, is a film that couldn't feasibly have existed until this precise moment in time. Ang Lee, perennial pusher of envelopes, has created a movie of such terrifying technological oomph, it simply could not have been made before now - it feels so new and box fresh, if you squint, you can still see the price tag on all the pixels. The ultra-high 100fps frame rate - suck it, The Hobbit! - in combination with native 3D and mind-boggling de-ageing CG imagery gives Gemini Man the feel of a cutting edge tech demo on an impossibly expensive John Lewis TV that you could never dream of affording. What's truly baffling, then, is why a movie boasting such impressive visuals would be sold so short by a story that feels like something Steven Seagal would have passed on in 1998.


This is a movie that bears all the hallmarks of 'good enough'. The sales pitch must have been irresistible: imagine the box-office clout of Will Smith… twice! With Chinese financing in place and a universally understood plotline so simple you can sell it with visuals alone, I can absolutely see how and why Gemini Man got made, and I can absolutely see why the interest levels from all involved dropped off a cliff as soon as it was given the green light - I get the sense that nobody really cared how it came together, only that it existed in the first place. On paper, it's a winner - look at the pedigree! Critically acclaimed filmmaker Ang Lee! Mr Box-Office Will Smith! Oscar-nominated screenwriter Billy Ray! Also David Benioff I guess! Gemini Man is completely absent of that accumulated talent. It's all looks, no soul.

Hackneyed doesn't even begin to cover it. A hitman with a heart, you say? The best in the business, was it? Who has demons and can't sleep, yeah? Pulled out of retirement by his shady government handlers because he knows too much? Whose best buddy gets popped? Whose second best buddy, who also flies a plane and is significantly less handsome than him, always comes through in a clutch? Who befriends a feisty female partner with whom he shares predictable back and forth? You would cringe at horribly clichéd dialogue like "I don't sleep, that's where the ghosts are" but you can barely hear it over the sound of the QI klaxon blasting over every other line. (Also, less than one minute after Smith says this, he takes a very long nap).

Better concept: Will Smith vs a digitally slimmed-down Martin Lawrence


Characters are painfully dumb, even the ones that are purportedly so perfect they must be cloned at all costs. Gemini Man is the kind of movie where characters are oblivious to information that audiences have known ever since they bought their ticket - it honestly takes a whole hour for Smith Snr to process a plot point that's literally spelled out in the movie's three-word tagline ('Will vs Will'). That's just bad writing, and it's no fun to watch the cast lag behind. Ooh, I wonder what kind of twisted and controversial bio-science an evil government firm called 'Gemini' could be getting up to? My strangely youthful doppelganger doesn't seem to know the score either. Truly it is a shitty mystery.

Even once everyone's all caught up, the concept of cloning is handled with ham hands in kid gloves. Surely the endgame for cloning super soldiers is that you have a whole army of identikit emotionless killers, right? But in Gemini Man, Clive Owen's villain has to raise Smith Jr from childhood, which seems an awful lot of hassle for a shady government operative on the go. There is potential for an interesting discussion on nature versus nurture, when grizzled Smith Snr tells his younger clone he knows he has nightmares just like him, but then we're also told that Yung Smith had a 'proper' upbringing and has had his DNA "edited" to show no fear or remorse, so why would he have nightmares? Maybe pain and suffering is essential in creating the more superior soldier? You'll have to go off on your own tangent to find out, because the movie is not interested in exploring this on your behalf at all.

"
"
It's the kind of movie where characters are oblivious to information that audiences have known ever since they bought their ticket
You may find your mind wandering more than once, because despite using every inch of the IMAX screen, the high frame rate serves mostly as a distraction. There is a reason the world's greatest filmmakers have soundly rejected HFR, and it is because the artifice of film is necessary in maintaining the traditional relationship between movie and audience - removing it with clearer and smoother movement only amplifies all the other ways in which the film is deficient. I am happy knowing that Will Smith exists on the other side of the screen; I don't want to feel like I'm sat in the room with him. With such pin-sharp clarity, fast motion - which you can imagine there's a fair amount of in an action film - feels oddly slick and overly animated. Audiences are now stuck between these two weird factions of cinema: one side where you've got Tom Cruise urging you to turn off motion-smoothing on your TV, and the other where you've got Will Smith making Motion Smoothing: The Movie. 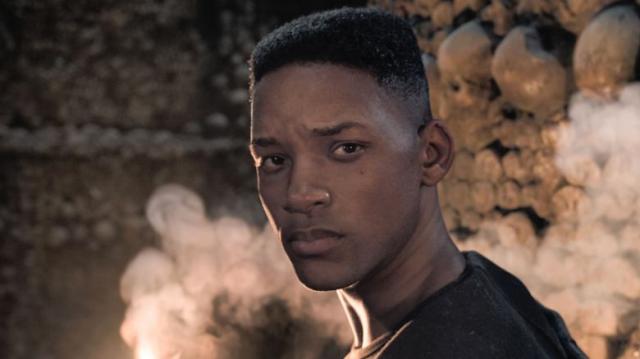 
The digital de-ageing is breathtaking in close-up, but less so in shots where it's clear a body double has been used. To his credit, Lee shoots action in clear daylight as well as by torchlight in twilight, so there's no attempt to hide shoddy work under cover of darkness, but there are a few instances of bad CG in the final act that sail over the uncanny valley with all the grace of Homer Simpson on a skateboard.

I'm just confused why everything else is played so safe. If you're going to make this movie, in which the former Biggest Movie Star in the World fights his younger self, maybe, I don't know, lean into it a little? You think people enjoyed Face/Off because of the mise-en-scene? Do you think Looper suffered because the young Bruce Willis was played by Joseph Gordon-Levitt in a prosthetic hooter? Both movies were far too busy being awesome to worry about overdoing it; Gemini Man desperately needs to be let off the leash. For God's sake, man, if you're going to toy with the idea of making a Fresh Prince joke, just make a fucking Fresh Prince joke! It's right there! Don't be coy!

Additional observations
- Another unnecessary distraction: Ralph Brown aka Danny the dealer from Withnail & I plays a character who is called Del, which is the name of the identical character Brown plays in Wayne's World 2.
- A hoary old writer's trick is to wait for a line of dialogue in a bad movie that reviews itself. For Gemini Man, that moment came when Young Will Smith shouts "None of this shit is necessary!" Athangyou.
- The big emotional speech during the finale had me hooting with laughter, particularly when one character preaches emotional restraint mere seconds before he shoots another character point blank in the face.
- When asked what he's afraid of, Smith Snr says "drowning". That's pretty much a given, mate. It's quite rational. Also, at no point is the character ever in danger of drowning.
- Any serious movie that has multiple lines of dialogue and/or plot points involving bees is rendered instantly hilarious. I am delighted to say that Gemini Man is a bee movie.

More:  Gemini Man  Ang Lee  Will Smith  David Benioff  Clones
Follow us on Twitter @The_Shiznit for more fun features, film reviews and occasional commentary on what the best type of crisps are.
We are using Patreon to cover our hosting fees. So please consider chucking a few digital pennies our way by clicking on this link. Thanks!