Review: Glass is a fragile follow-up with wasted promise 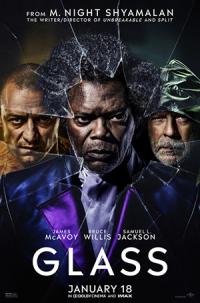 No one knows the importance of a good ending like M. Night Shyamalan. He has built his entire career on them. He knows that many film flaws can be forgiven along the way if, right before the credits roll, he can suddenly wow an audience so that they leave only talking about that ending. It’s a circus approach to storytelling, saving the big top narrative stunt for the final act, but it works. In the case of Split - an otherwise divisive film - it worked so well that the ending itself manifested a whole sequel. But no one should be in any doubt that it’s a cheat. A big last-minute reveal teasing a forthcoming crossover might be an original way to have a shock twist, but it doesn’t automatically make for a good ending to what came before it. Just as it doesn’t automatically make for a good beginning for what comes next.


Upon rewatching both Unbreakable and Split, it seems clear that there’s just more story in the former than in the latter, and that’s because Unbreakable isn’t relying on its big reveal ending to provide context for everything that happens in the plot. Split, on the other hand, benefits hugely from a rewatch, because it’s only when you already know that it exists in the Unbreakable universe that the film seems less inherently ridiculous.

Watching Bruce Willis slowly start to come to terms with the fact that he has slightly enhanced strength is one thing, watching James McAvoy supernaturally grow throbbing veins across his pecs in the space of one scene is entirely another. Of course, once you know that they are part of the same logic, it becomes slightly more palatable, because Unbreakable has already laid the groundwork. 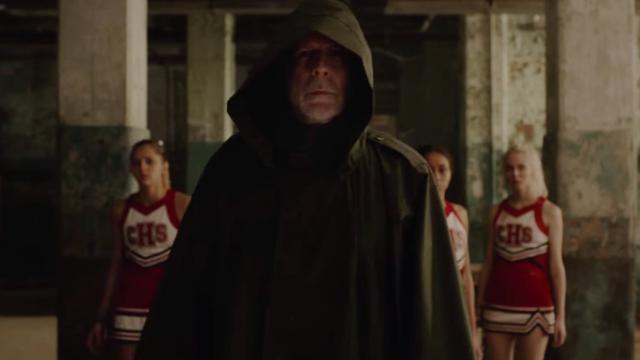 As well as the wardrobe choices.


All of which is a long-winded way of getting round to Glass, which suffers from similar problems to Split. First of all, let’s be clear, the fact that Glass exists at all, that it reunites the original cast from both films, 16 years apart, 19 years after Unbreakable, is a huge accomplishment, and the film thrives on the fact that this still presents an original and genuinely exciting prospect. But it also knows it. Glass is more interested in having the characters from its two predecessor films meet and confront each other than in actually having anything happen when they do. And this self-satisfaction is made no more abundantly clear than in Shyamalan’s cringiest cameo to date, in which he practically holds up a sign saying “I’ve dun retconned a crossover”.

In practice, what many may have hoped would be cat-and-mouse thriller with Bruce Willis’ David Dunn tracking down James McAvoy’s Horde, is actually another exercise in exploring comic-books-as-mythology. The ‘chase’ element is dispensed with early on when Dunn luckily bumps into his serial killer while out on patrol and then soon both superpowered subjects are captured and thrown into a psychiatric hospital where Samuel L. Jackson’s catatonic Mr. Glass already resides. From here, much of the film focuses on each of the three characters playing a waiting game while Sarah Paulson’s Dr. Staple tries to convince them all that they suffer from a comic-book delusion. 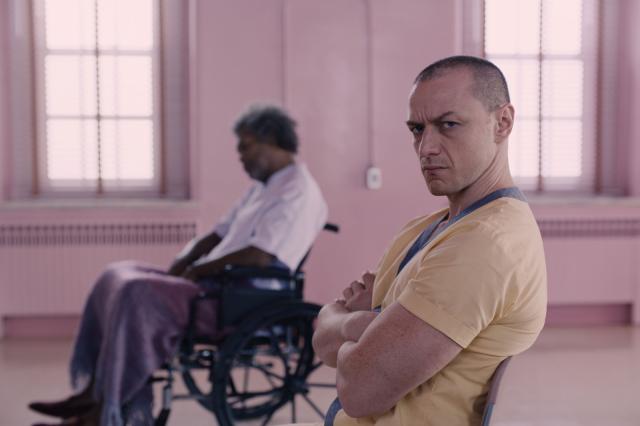 Did you... not see me climb the wall earlier?


And it’s all so... inert. As an audience, we can’t be invested in Staple’s conviction that their abilities are all in their head because we have seen evidence to the contrary in the previous films. What makes it harder to stomach is the fact that it should be easy enough to prove to her that, say, Dunn is an unusually strong guy. Meanwhile, no amount of Unbreakable context is going to help Mr Glass seem any less absurd in his efforts to frame everything in some kind of comic template. By the time even his mum is arguing that “This is all just like a limited edition”, it’s difficult not to wonder why they care more about puzzling over the type of comic they’re ‘in’ than about the imminent danger directly in front of them.

James McAvoy arguably saves the film, although this will depend on your taste for his scenery devouring performance in Split. Personally, I think his transformative display of personalities is a mesmerising showcase of his talent, flitting between wildly different roles at the flash of a bulb. Wherever you land on him, you can’t deny that McAvoy doesn’t make interesting choices in each scene. And that’s very much welcome in a film where he stars opposite Bruce Willis, for whom ‘dazed and taciturn’ felt like an acting choice when he first started collaborating with Shyamalan, but now it seems more like a lifestyle one. He just always seems so tired of everything. Following Unbreakable, Split and Glass, it’s not hard to imagine a David Dunn focused follow-up entitled ‘Shattered’. 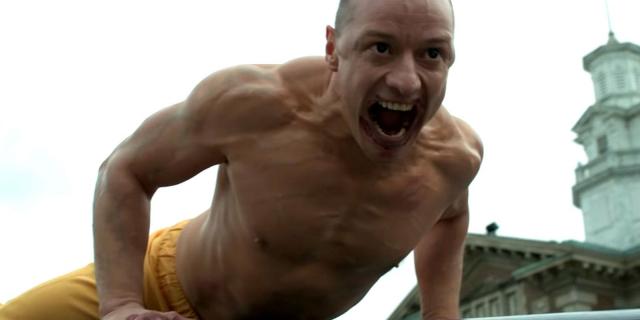 Just try to imagine Bruce Willis putting this much energy into a performance. Go on.


That said, of course - being a Shyamalan film - it all leads to a genuinely surprising ending. It’s remarkable in the truest sense of the word, because it’s the biggest talking point of the whole film. Many will argue that it’s clever, shocking and stays true to the trilogy’s comic-book themes. Others will argue that its anti-climactic, unceremonious and that Shyamalan’s entire knowledge of comic-books stems from reading the contents list on the Wikipedia page for ‘comics’. Everyone will be correct, but either way it doesn’t change or make up for the many flaws throughout the remainder of the movie.

On the whole, Glass mostly just seems like a waste of the potential and goodwill built from both previous films. Still, a good ending is to ‘always leave them wanting more’, and by failing to meet hopes and expectations, then this achieves that, because many certainly would have have wanted more from this.

More:  Glass  M Night Shyamalan  Unbreakable  Split  James McAvoy  Bruce Willis  Samuel L Jackson  Sarah Paulson
Follow us on Twitter @The_Shiznit for more fun features, film reviews and occasional commentary on what the best type of crisps are.
We are using Patreon to cover our hosting fees. So please consider chucking a few digital pennies our way by clicking on this link. Thanks!