Review: Godzilla: King Of The Monsters is a dreary mess of titanic proportions

To all those that said Gareth Edwards' Godzilla was a bore, or that it was slow, or that it took too long to reveal the beast himself, this one's on you, because this new monster mêlée follow-up is a megatomic nuke to the senses. It's a relentless shit-storm of mayhem and bullshit that attempts spectacle but delivers shaky-cam confusion and exhausted clichés for optimum headaches and head-shakes. It's a slog, an onslaught of expensive oblivion and a brain-fouling juggernaut of chaos. Although, I realise some of you may actively want all of this from your giant monster stories.


Let's agree there needs to be a balance, and unfortunately Godzilla: King Of The Monsters doesn't achieve it. It's just too much movie for one movie. There's Kyle Chandler playing Redemption Dad trying to save his family amidst a barrage of literal block-busting, and Vera Farmiga playing Scientist Mum with a noise machine designed to soothe every giant creature like some kind of acoustic Calpol. Meanwhile Ken Watanabe plays Awestruck Expert banging on about respecting the Natural Order even though it means seeing the Earth reduced to scorched ruins in the process, and Millie Bobby Brown plays Gutsy Teenager constantly gambling with her own life like it has the value of a funfair token. Oh, and Charles Dance is a mysterious villain sort who seems like he might actually want to just bring about the end of the world for no real reason, and nobody thinks to ask him "You do know, you're IN the world, don't you? That this, all around you, is the world?".

"
"
It strays into granting Godzilla the status of an actual deity, worshipping the very ground he stomps on
So far, so Jurassic Park/World, but then there are the titans. You have to expect and allow the film to treat Godzilla himself with a sense of wonder and reverence, even when it strays into granting him the status of an actual deity and worships the very ground he stomps on. His main antagonist, Ghidora, a three-headed dragon that vomits electricity at everything in its path, has to be set up as Godzilla's brute force equal, so it's understandable that the film spends a lot of time establishing that. But then there's Mothra, who - and I cannot stress this enough - is a big moth. She is Godzilla's ally, which will come in handy because there's also a giant spider monster, a woolly mammoth thing and a host of other massive beasts that wreak havoc all around the planet, so thank god for the big moth, eh? 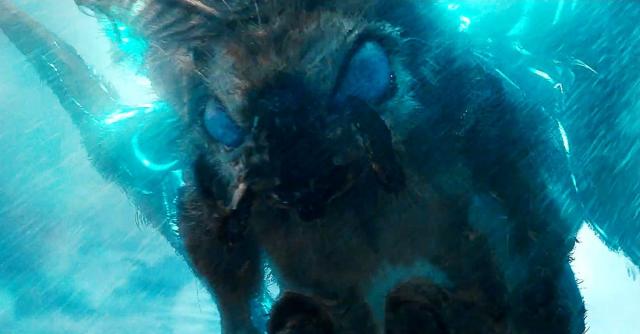 Useful in a fight only until someone turns on a lamp.


Needless to say, things get smashed. Things get smashed hard. Everything, in fact, gets smashed so very hard, and we are shown this happening throughout all the major cities of the world. The destruction in this film is so all-consuming that, at around the halfway point, it's not really clear what's left for our dozen-or-so heroes to save. Cut to a newsreader in a studio reporting that "This is the single greatest disaster in human history". Yes, no shit. And you know why? Because Godzilla isn't pulling his significant weight - he's only gone and brought a fucking moth to a three-headed dragon fight. 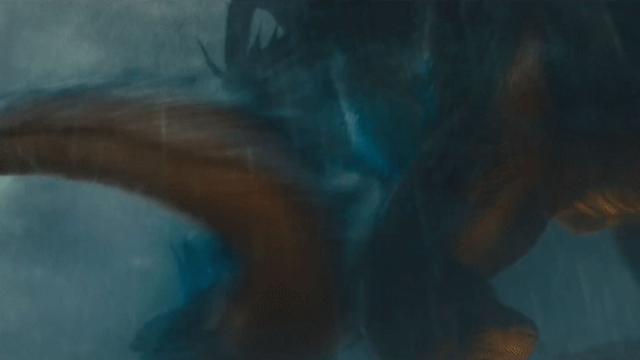 
Offset this against the assault of military protocols, the avalanche of disaster movie tropes and the shallow tapestry of man-God-worship stuff that really doesn't deserve further thought, and there is just too much nonsense happening at all times. It's amazing to think how long director Michael Dougherty must have stared at Godzilla's reptilian hide during production and at no point did it occur to him to 'scale back'.

The one thing that the film does a decent job of delivering is a sense of veneration for its subjects, and there are more than a handful of truly iconic shots of the monsters in all their braying glory, back-lit against plumes of fiery smoke. Which is great if you just want some posters to hang in your room, but those wanting their giant monster stories to contain actual stories are just going to be left feeling utterly crushed.