Review: Knives Out is a modern-age murder mystery that absolutely kills it 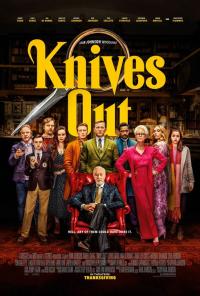 Traditional murder mysteries must be the hardest stories to write, because audiences are always second-guessing everything, desperate to work out the twist before the genius detective. Writers have to seed important details among their pool of suspects without giving the game away, whilst also offering red herrings that have to feel like they could still be relevant. Meanwhile their audience is constantly reading too much into everything, determined not to be outsmarted. So a film like this one is already at make-or-break point for each viewer. If they don’t guess the killer and the motive, and the reveal still makes sense, then they can be satisfied with the thrill of being outplayed. But if they solve the mystery before the end, it’s "Nah, that’s rubbish, mate. I saw it coming a mile off". And audiences are actively rooting for the latter. They’re the ones with the knives out.


What makes it even harder is that, by the definition of the genre, murder mysteries are formulaic, and everyone already knows exactly what that formula is. If married couple Peter and Diane Newhart are always bickering then Peter must be having an affair with his secretary Sally; if Maximilian Golding of Golding Luxury Cruises is having financial trouble, he is definitely being blackmailed by intrepid journalist Chuck Tanner; and if Henry the doorman mentions in passing that he was adopted as a child, then he absolutely is the Duchess’ secret love child who stands to inherit a fortune from her coveted collection of rare and precious diamonds. These stories are built on tropes that have been done to literal death. The traditional murder mystery was killed off long ago, and it was the likes of Poirot, Father Dowling and Jessica Fletcher whodunnit.

Thankfully, Rian Johnson knows this all too well and applies the same determination to break the rules here as he did - for better or worse - with his last film. Just as plot twists unravel faster than an incriminating jumper snagged on a branch twig, so too do narrative rug-pulls and new story threads, which are consistently exposed and left to dangle enticingly. In this way, Johnson explores beyond the initial party-guests-at-a-stately-home set-up, first via character flashbacks and then, still early on, via switching the movie into a farcical game of cat-and-mouse instead.

This alone sounds risky enough, but Johnson is clearly confident in his control. Beyond this just being a fun, entertaining film, the real achievement is in him understanding exactly what his audience is thinking at all times, second-guessing their second guesses and proving to be a masterful manipulator in wrong-footing everyone when needed. 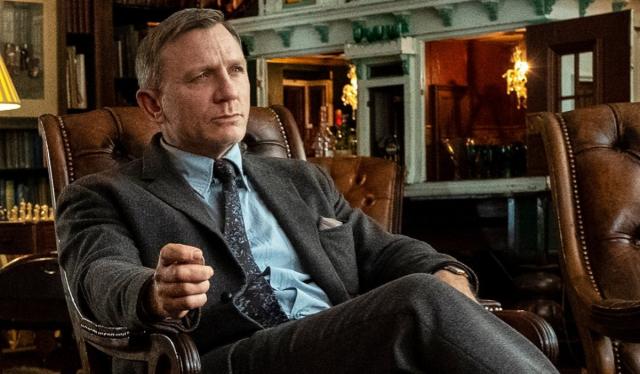 
Helping him in this deception is an enviable ensemble cast of A-list stars who are all clearly having much more fun than the big names gathered for, say, Kenneth Branagh’s recent Murder On The Orient Express. You can just imagine Judi Dench and Michelle Pfeiffer at Branagh’s house for a formal dinner whilst hearing loud fun and laughter from Johnson’s place next door and desperately wishing there was a way to make their excuses and sneak away to be in that film instead. I mean, Christ, even Daniel Craig looks like he’s having fun in this film, and the last time he cracked a smile was in 2008 when the critical reception of Quantum Of Solace led him to briefly entertain the idea of quitting Bond right there and then.

"
"
The cast make up a group of supporting players as rich and colourful as the decor that surrounds them.
His Benoit Blanc is the 'renowned detective' typical of the genre, created in the Poirot-mould, only he has a southern drawl where a moustache should be and his little gray cells are a bit more scattered. His is a character that’s a little hard to pin down here, playing second-fiddle to main protagonist Marta rather than taking centre stage himself, Blanc is presented as a brilliant mastermind but is frequently seen to be infuriatingly inept, certainly several steps behind the audience when usually this kind of character is way out ahead. His role is that of idiot-savant, and it’s never quite easy to tell which of those he really is.

There is at least clarity with the rest of the cast. Jamie Lee Curtis, Michael Shannon and Toni Collette are the grown-up, spoiled brat kids of murdered Christopher Plummer, while Don Johnson plays Curtis’ opportunist husband and Chris Evans steals everyone’s thunder by throwing down his Marvel shackles and playing an absolute dick of a grandson, albeit with shades of benevolence. Collectively, along with other relatives, employees and investigators, they make up a group of supporting players as rich and colourful as the decor that surrounds them. 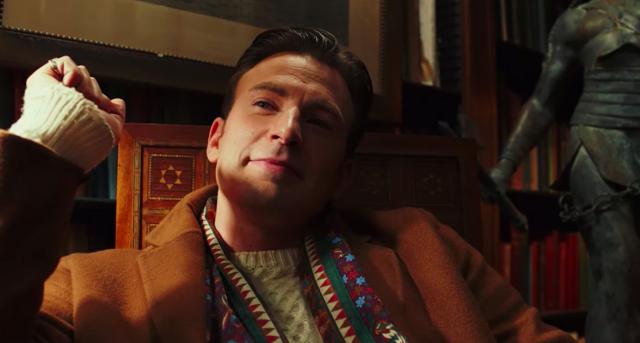 
Of most interest though is Ana de Armas, who takes the lead as Marta, Plummer’s kind, gentle carer whose genuine heart and maturity contrast against his family’s bickering. With an inside track on the key suspects and a comical inability to lie, Marta proves invaluable to the investigation, and de Armas shoulders the film with a balance of comedy and charm that outshines her mega-Hollywood co-stars.

Overall then, it’s a smart, slick, ever-so-entertaining film and I have spent 800 words barely saying anything at all about it. That’s because if there’s one thing harder than writing a murder mystery, it’s writing a spoiler-free review of one.

More:  Knives Out  Rian Johnson  Daniel Craig  Chris Evans  Ana De Armas  Jamie Lee Curtis  Michael Shannon  Don Johnson  Toni Collette
Follow us on Twitter @The_Shiznit for more fun features, film reviews and occasional commentary on what the best type of crisps are.
We are using Patreon to cover our hosting fees. So please consider chucking a few digital pennies our way by clicking on this link. Thanks!