If I could have had a small, green, wise mentor teach me the ways of online film criticism, he probably would have instilled in me a respect for the balance between objectivity and subjectivity. He would have told me that uninformed criticism is what binds the entire internet and that I should always try to be mindful of hype. But, halfway through my training, I would have still no doubt run off unprepared to face what is easily my greatest weakness: Star Wars.


This new Episode represents a critical time for the Star Wars verse. Where The Force Awakens could revel in nostalgia and Rogue One could put that same nostalgia literally up on the screen, The Last Jedi feels like it's the first film that has to do something entirely new and interesting with the franchise. And it almost does - director Rian Johnson brings a clear fresh perspective to the visuals and ideas therein, but it's going to be hard for anyone to argue that The Force Awakens copies A New Hope and that this film doesn't do the same with The Empire Strikes Back.

The film opens on an attack, with the Rebels trying to flee to safety, only to lead to concurrent storylines in which the band of heroes from the previous film are kept separate for much of the movie. It's especially important because, during this time, a young Jedi in training needs to learn the ways of the Force from an old wizened master, only to be lured to the Dark Side and face off against their greatest enemy completely unprepared. 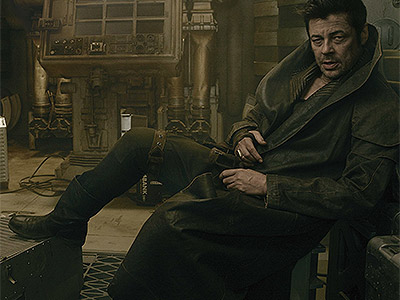 And this guy is like Lando, or Lobot, or somebody.


Of course, these broad strokes paint a lazy picture and the truth is, as with The Force Awakens, there's no beat-for-beat template copied here. It's just that, if there are such things as Star Wars tropes, this new trilogy is deliberately packed full of them. And it has to be, or else these new films wouldn't feel part of the same saga.

In particular this time around, the sense of destiny and purpose that buoyed the original trilogy comes back into the spotlight, and along with it come revelations, betrayal, lessons in wielding awesome power, the forging of new bonds and the jaded old reluctantly giving way to the idealistic new. Taking his cue from Empire's turning point into more mature territory, Johnson has gone for a clear tonal shift here too, adding layers of complexity, murky morals and even an engineering spanner in the works for shippers of a certain couple. As a result, there's more inner conflict than intergalactic.

That's not to say that there isn't plenty of spectacle on show though. A Hoth-like battle on an ice-white salt world underscored by blood-red skid marks is about as iconic as it comes in this far-away galaxy, while new ships and weapons and everything in between stretches the imagination of an already expansive galaxy even further.

We also see the Force get developed in previously unseen ways (the Jedi can Force-Skype now), including one pivotal, powerful, and potentially divisive moment for Leia, and a fascinatingly eerie encounter with a Dark Side vision. There's even a satisfying explanation of what the Force actually is, with visual markers, and there's no mention of a single midichlorian to be heard anywhere. 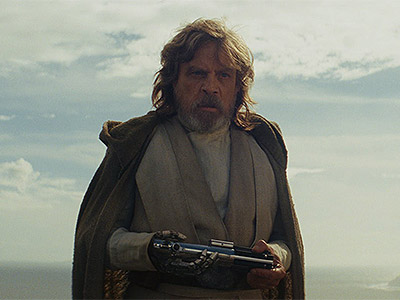 "What do you mean there was once a dispute about the taxation of trade routes to outlying star systems? Whaaaaa?"


Understandably, after the way The Force Awakens left us hanging on a cliff, all eyes are on Mark Hamill, and its safe to report that his portrayal of Luke here lives up to expectations. Just as Adam Driver's Kylo Ren continues to be magnetic with quiet, unassuming malice simmering through every lip tremble, Hamill is captivating in the opposite way, embodying every crazed and anguished expression on a face as craggy as his new island home of Ahch-To.

Sadly though, with all focus on the drive and purpose of the key Force players, this film misses the sparking chemistry between John Boyega and Daisy Ridley from its predecessor, as well as the back-and-forth bromance between John Boyega and Oscar Isaac, not to mention the deft self-deprecating comedy of... well, John Boyega. With Finn tasked with an important role to play elsewhere, the comedy - and there is plenty of it - is spread out more evenly across the whole cast. In the case of Domhnall Gleeson's Hux, this becomes a good opportunity to poke fun at the horribly hammy performance he gave in The Force Awakens. But when he is playing those laughs off against his only foil - Kylo Ren - Johnson threatens to undermine their status as epic villains. 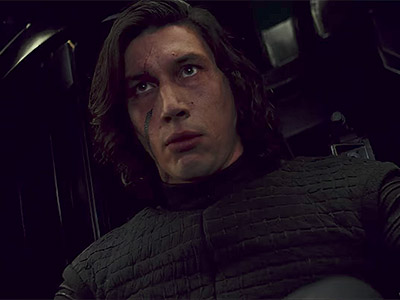 
There are a few plot problems too. The biggest one being the time structure of the whole film. Perhaps once again taking a cue from Empire and that film’s own chronology confusion, The Last Jedi depicts both major story strands as taking place while the First Order and the Resistance are engaged in a total stalemate battle situation. The clock is apparently ticking down to a win for the Empire, but at no point do we feel the sense of urgency that this should give proceedings.

There’s also a strong sense by the end of the film that, particularly for the Rebels, nothing they have done has particularly achieved anything worthwhile. They spend the entire film escaping from one place to the next, and it feels more out of plot contrivance rather than design. At the other end of the importance scale, a middle scene promoting animal rights activism on behalf of racehorse-like species just feels unnecessary when everything else in play feels like it has such higher stakes.

But then this is Star Wars and we measure these films against a higher benchmark than most movies. On the whole, this is a great step forward for the franchise – it’s deeper, it’s darker and it has porgs. Perhaps most interestingly, after having so many unanswered questions teased out in The Force Awakens, The Last Jedi goes a long way in answering almost all of them, leaving us with only one question left: What's going to happen next?

More:  Star Wars The Last Jedi  Star Wars  Rian Johnson  Daisy Ridley  John Boyega  Adam Driver Oscar Isaac  Mark Hamill  Carrie Fisher
Follow us on Twitter @The_Shiznit for more fun features, film reviews and occasional commentary on what the best type of crisps are.
We are using Patreon to cover our hosting fees. So please consider chucking a few digital pennies our way by clicking on this link. Thanks!