Review: Mandy is a hypnotic nightmare of blood, drugs and damnation 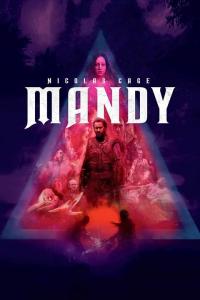 Another year, another London Film Festival, another annual peruse of the festival programme choosing films that sound fascinating in theory without really knowing what to expect in practice. Take Mandy, for example, which the programme describes as “a film so singular, perverse and beguiling, it’s almost impossible to define”. Ok... maybe try though? “Think of the most exquisitely nightmarish LSD trip imaginable, then multiply it by ten”. Hmm, I have no idea how to do that, but it sounds interesting. Ok fine, I’ll see it. “Don’t just see Mandy, experience it”. WHAT IS THIS IS IT EVEN A FILM.


The BFI is - as you might expect, being the BFI - perfectly correct in its total inability to properly prepare anyone for Panos Cosmatos’ insane, cult horror. It’s a film that lulls you into disorientation, seduces you with colour and worms into your psyche by playing on your base fears, all with a smattering of humour and a splattering of gore. This is Nic Cage’s raging, blood-soaked, psychedelic revenge inferno, and it’s exactly as difficult to explain as that suggests. But also just as enticing.

A patience-testing first half sets the tone, as Nic Cage’s taciturn lumberjack Red Miller cuddles up with Andrea Riseborough’s witchy goth Mandy in their homely cabin in the woods and they while away their time talking about planets to mood-altering shifts of light and colour. That is until a monstrous home invasion set in motion by a mysterious cult leader results in Mandy being kidnapped, leading to Red launching his own bloodythirsty retaliation. 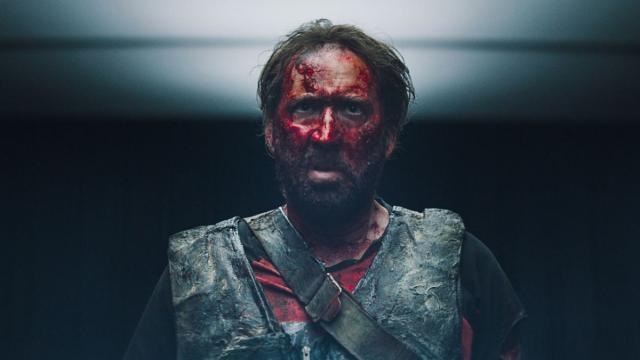 
With a heavy inference on both the supernatural and heavy drug use, Cosmatos spends most of his time building atmosphere. Slow motion, low shutter speeds and prolonged exposure fuel a hallucinogenic effect, while silhouettes backlit by vibrant lights painting the sky behind them create shots of pure iconic poster art. All of this is then set to Jóhann Jóhannsson’s score of stomach-bothering bass notes that reverberate throughout to create the sense of a deeply unnatural unease, even when Mandy herself seems so in tune with nature and the elements (one scene literally transitions from the sky to flowing water to fire and then to the forest that Mandy is walking through).

Deliberately suggesting that there are very primal horrors at work throughout, Cosmatos plays with ideas of literal and figurative hell. The biker gang responsible for the initial bloodshed are basically Hellraiser's Cenobites on wheels apparently summoned with an ancient artefact, but are they actual demons are just drugged-out, fucked-up thugs? As Red's rampage takes him further into surroundings that increasingly seem damned to fire and brimstone, the point is obvious: there is no difference to him. Red's grief is his own personal hell, and to survive it he has to become his own monster, axe in one hand, crossbow in the other, and with a large chunk of coke up the nostrils. 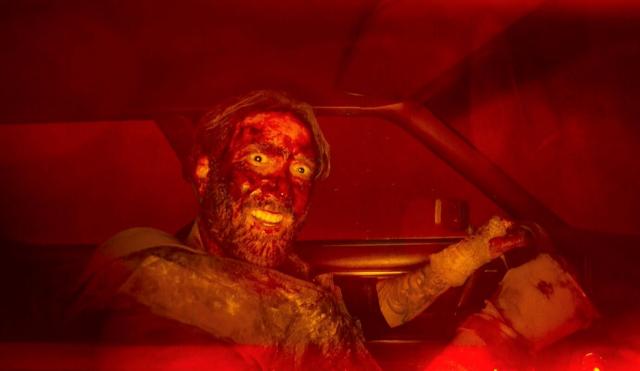 If it's not already clear, Cage's performance here falls far right on The Nicolas Cage Matrix, way past Ghost Rider and hovering around the Face/Off and Wicker Man line of the 'Mental' section. And, let's be honest, no one needs to know where he lands on the Rubbish-to-Brilliant line of that graph because this alone makes Mandy a must-watch.

Riseborough, meanwhile, is compelling to watch as the benevolent artist Mandy, who appears equally at total ease and entirely enraptured by life itself. It’s Linus Roache’s performance As Jeremiah, the commanding junkie patriarch of a family of followers, that proves the other stand-out element here though. The character is the manifestation of hallucinogens, confident in his beliefs, emboldened by his own speeches, convinced of his ability to control darker forces, and then prone to bouts of anxiety, fear, paranoia and whatever else adverse effects you might find listed on a drug abuse information page.

Together it all adds up to a visceral mind-meld of depravity and damnation. It’s grindhouse meets arthouse to form a great House That Jack Built Somewhere Between Hades And The Netherworld. While often visually overwhelming, it’s a film that shifts and nudges at your core to discomfort at every level so that it’s not just something you see, but something you experie- OH MY GOD I GET IT NOW.

Additional observations:
- This is Cage at his most giftastic, but one scene in particular stands as a true ‘Cage off the leash’ moment, seeing him flit between howling in grief, roaring in rage and swigging from a vodka bottle, all while dressed in a jumper and some briefs.
- There are probably several religious parallels and mythological comparisons littered throughout the film that someone will be able to explain, but I am not that someone.
- Cheddar Goblin. That is all. Cheddar Goblin.

More:  Mandy  Nicolas Cage  Andrea Riseborough  Panos Cosmatos  Linus Roache  LFF 2018
Follow us on Twitter @The_Shiznit for more fun features, film reviews and occasional commentary on what the best type of crisps are.
We are using Patreon to cover our hosting fees. So please consider chucking a few digital pennies our way by clicking on this link. Thanks!