Review: Ralph Breaks The Internet, but is that what kids even want? 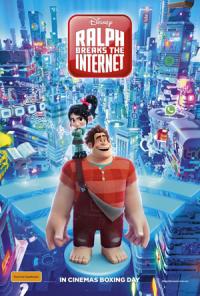 Due to what I'm sure were very important reasons, we never got round to reviewing the recent Suspiria remake here, so apologies for that. It is, however, a truly exceptional film that chills to the bone and slowly builds to a darkly disturbing crescendo of menace and gore. Its only major problem is that there is an early scene so horrifying, so deeply, core-shakingly terrifying, that nothing afterwards can match it for sheer horror. It is truly nasty beyond reproach and is hands-down the most repulsive film scene of 2018. I mention this because, against all odds, Ralph Breaks The Internet contains a sequence that comes a close second.


No spoilers, but suffice to say that this King-Kong-inspired turn of events will haunt me to my last days on earth, huddled in the corner of a care home where the only thing my senility-riddled brain can muster is this pure unfiltered nightmare playing over and over again on a loop in my head.

So imagine how my four-year-old son, who was crying next to me during this part of the film, must be feeling. There’s a chance that he will never be able to come into contact with a WiFi signal again without his body shutting down in a deep state of shock, or maybe he'll be okay because I managed to bribe him with a cookie to stay until the end. Tsk, irresponsible filmmakers, eh?

Disney films have always flirted with scary scenes that arguably have no place in a family movie (I can't wait to see how Tim Burton live-action-adapts Dumbo's surreal drug trip into Trainspotting levels of sickening debauchery). But for Ralph Breaks The Internet, this dark turn seems more a result of the film not knowing who it is trying entertain most: kids or their parents. This is, after all, a film where the primary hook is a bunch of nodding jokes about how the internet works, SEO, clickbait, social influencers, trolls, the dark net and, yes, Disney princesses throughout the ages. And it works. The film is brilliantly funny and incredibly clever in its depiction of the Internet as an inhabitable place, where Twitter is a real tree of blue birds literally retweeting each other and Instagram is a giant art gallery. But as we walked out after the credits and I asked my son what was his favourite part of the film, his answer certainly wasn't "I loved the joke about autofill, Daddy. It totally rang true with my experience of Google's browser data." 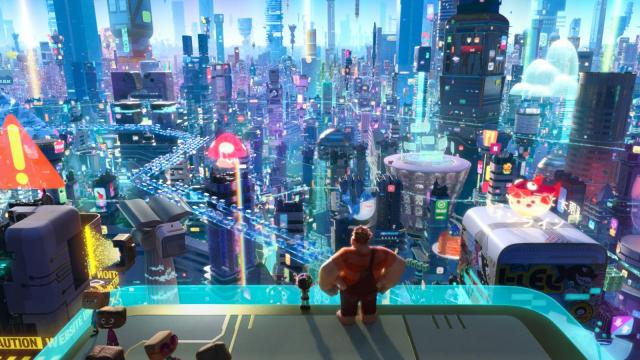 Trivia: There are 326 Easter eggs to be found in this still, but no one can be arsed.


Sure, he's four, and certainly on the young side of the PG demographic, and maybe I'm just out of touch with our younger generation's familiarity with (*puts on half-moon reading glasses*) the world wide web. Either way, the same criticism could certainly be said of the original Wreck-It Ralph, where its myriad of arcade and console cameos fly over the heads of anyone born this century. But that feels more acceptable. After all, a Pac-Man ghost, Bowser and Zangief are just a cartoon ghost, monster and angry Russian wrestler for those not in the know. The characters still work in the context of the scene. For this sequel though, a gag about a pop-up character getting obstructed by an ad-blocker is just, well, a gag about ad-blockers.

As a whole, the plot is simple enough, with Ralph and Vanellope on a goal-oriented mission that pleasingly suits their videogame origins. The steering wheel on Vanellope's Sugar Rush arcade game has broken and the pair break into the Internet to try to raise enough money/credits to pay for a replacement on eBay or else the glitching sprite will lose her home for good. It takes a little too long to get going, and the film really only kicks into a high gear when Vanellope visits Oh My Disney for a cameo-saturated sequence of fun at the Mouse House's expense, but there's a clear drive to proceedings that keeps things moving at a zippy pace.

At the heart of it all though is a complex message of friendship and insecurity. For all the meme mayhem and web wackiness, the film ends up having a lot to say about the nature of a smothering relationship, how this often leads to inadvertent emotional blackmail and manipulation and how - even unintentionally - this can be a form of abuse. It's all handled in a suitably delicate way, hitting all the right notes of sentimentality and profundity at the right moments, but it feels a little heavy going considering the last film was just about finding friendship in the first place.

It is, at least, a natural character progression for Ralph, who is the one traversing this learning curve. Because if the film has its story still rooted in videogames, of course it’s in Ralph's code to still be the bad guy.

Although this is a bad guy too and at one point Ralph refers to his deformed parasitic brother as a tumour. THANKS DISNEY.


And, obviously, it's a sign of the franchise maturing. Just as Toy Story has fun imagining inanimate playthings coming to life and subsequent sequels explored the actual consequences of that for the toys, this follow-up progresses Ralph and Vanellope in a real-time six years. With Vanellope part of a game that's more sophisticated than Ralph's 8-bit environment, it makes sense that she would have more sophisticated values - in this case, the desire to experience more than exists within the plug socket junction of Litwak's Arcade. Following the same logic, it is perfect positioning that she would later feel a sense of belonging within Slaughter Race, an even more sophisticated online RPG (led by the Gal Gadot-voiced Shank) that allows her to drive freely within an open, albeit violent, environment.

There's the feeling though that, just as in the first film, and with other properties like the Cars series, the rules established in this sequel haven't been fully fleshed out. It's great to make jokes out of specific websites and online behaviours, but sometimes it begs more questions about other areas of the internet that don't easily fit into the world presented here.

Additional observations
- Forget the Disney princesses scene, there is a musical number in this film that is an even better send-up of Disney.
- I know it's an obvious thing to do, but I really loved how the people in Slaughter Race moved like actual playable characters, right down to a little accidental skip-jump as one changed direction.
- At one point, you can see the sign for IMDB, and I lost five minutes thinking about how this review will be posted there, which technically means that I'm IN this film.

More:  Ralph Breaks The Internet  Wreck-It Ralph  Disney  Rich Moore  Phil Johnston  John C Reilly  Sarah Silverman
Follow us on Twitter @The_Shiznit for more fun features, film reviews and occasional commentary on what the best type of crisps are.
We are using Patreon to cover our hosting fees. So please consider chucking a few digital pennies our way by clicking on this link. Thanks!