Review: Vice shows Dick Cheney as a man with few virtues and ohhh, I see what you did there 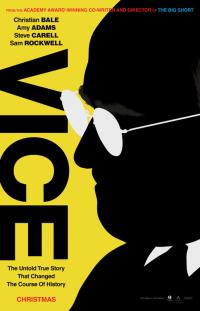 My knowledge of Dick Cheney pretty much started and ended with knowing him as the veep who shot a guy in the face whilst on a hunting trip. Had I bothered to actually watch all of The Daily Show with Jon Stewart episodes I've recorded over the years, I would have known that Cheney has always been the dark heart of American politics; a man rotten to his very core, which itself is a tiny black hole from which no joy or light can escape, who's been haunting the White House long before President Trump gleefully served McNugget BBQ sauce out of the Lincoln silver gravy boats to those footballers. Luckily, Adam McKay is here again to distil complex information to dummies like me, although newsflash - the political system is like, totally corrupt, you guys.


Vice's opening gambit admits that "Cheney is one of the most secretive leaders in history", so you can kind forgive yourself if, like me, you don't know much about Dick. Depending on which sites you frequent on the internet, you're either likely to think of him as a righteous warrior or raging psychopath. So how do you tell the tale of a "jagged-toothed forest demon who steals our children" without coming across as one-sided and biased? The short answer is, you really can't, but with a man so reprehensible and responsible for pretty much all that's wrong in the world, does it matter?

We first meet Cheney (Christian Bale) as a young and wild ruddy bloke, who's put on the straight and narrow after being read the riot act by his girlfriend (Amy Adams). His ascendancy to power starts after an on-a-dime decision to become a Republican, and so McKay leads us to believe the rot really starts to set in then. 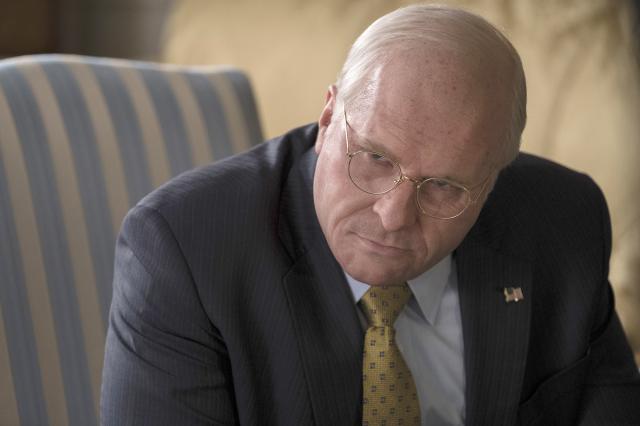 FACT: The precise amount of evil in a man can be calculated by counting his liver spots.


During the Reagan administration - a man brought to power by a surge of angry, white, rich men who feared change - he supports the dismantling of Jimmy Carter's progressive environmentally-green presidency by supporting policies that favoured the fossil fuel industries. While CEO as of one of the largest providers to the energy industry during the Clinton years, he was put in charge of the committee to find a new Vice President, only to give himself the job. On his return to the White House, he became the power behind the throne of George W Bush, pushing for the "mundane" responsibility for energy and foreign policy to fall to him, whilst still holding $18 million in stock options at his former company. And then came 9/11 and that whole questionable war, not to mention shooting someone in the face and then getting the poor sap to apologise to him...

"
"
It will be of no surprise to anyone that Bale really climbs into the role of Cheney
And that's just the stuff we do know, or should know had we been paying closer attention. Given the secretive nature of his quarry, writer and director Adam McKay has free reign to fill in all the gaps and play about with structure, choosing to frame the narrative within a voiceover by a character (played by Jesse Plemons) whose significance is only revealed in the final act. The truth can be complicated, and the film opens with the disclaimer, "We did our fucking best". It's as exhausting as it is compelling and demands you keep up with the pace, but it does so with a deft touch of humour.

McKay has been criticised for what's been perceived as a normalisation of a monster, but he manages to stop himself just short of showing Cheney turning into a bat and flying away. He approaches his political biopic in that haphazard, non-linear way that made The Big Short so divisive, allowing characters to break the fourth wall and explain their positions, but takes care not to exonerate a man whose actions have led to the deaths of thousands. 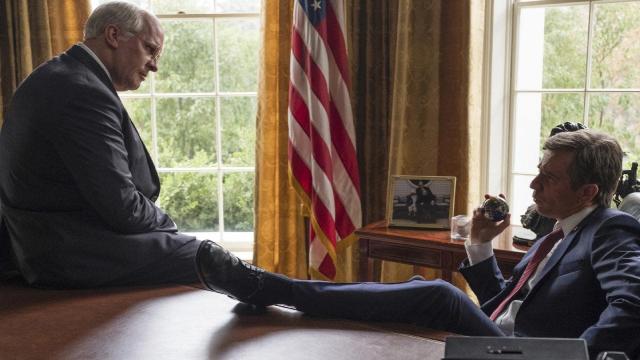 The REAL question is: how did he manipulate the steel trap mind of George W. Bush?


McKay uses lots of gimmicks to help understand lofty ideology such as Unified Executive Power and has a million different ways to get his points across. There are some neat touches, such as Cheney and his wife Lynne lapsing into a Shakespearean soliloquy to highlight their grand designs, and an Alfred Molina cameo as a waiter in an elaborate gag about torture methods. An amusing dummy credit-roll midway through sets up a cheery, alternate universe in which Cheney actually did the decent thing, before crashing us back into the dark reality. McKay isn't subtle, but he gets the point across, particularly with an audacious choice at the end that sees Cheney directly tell us how he managed to get away with it all.

It will be of no surprise to anyone that Bale really climbs into the role of Cheney and delivers an astonishing performance. This is more than just wearing a fat suit - to put it lightly, Bale is really built like a brick shithouse - but he properly transforms into a growling, walking blancmange of a man devoid of any humour or warmth, and yet can make the announcement of a heart attack hilarious in its mundanity. Even watching him brush his teeth is mesmerising. Also amazing is Amy Adams, the Lady Macbeth to Bale's Richard III if you really want to extend the Shakespeare similarities. She is easily Bale's equal in inhabiting her character, even changing her voice to the point I was convinced she'd been dubbed. She's steely and morally dubious, and could easily be the real protagonist of the piece.

"Wait, which one of us is leading?" See? I can do satire.


Equally entertaining are the supporting characters, with Sam Rockwell playing Dubya on just the right side of a dumbo with daddy issues, and Tyler Perry as a conflicted Colin Powell. Even with little to no idea of who the other major players are - Steve Carell pops up as Donald Rumsfeld, and Eddie Marsan as Paul Wolfowitz - the performances alone are enjoyable nonetheless.

Through all the dramatisations of backroom machinations, and powerhouse acting, there is however a disappointing lack of zingers and quotable dialogue to make up for the choppy narrative. The facts (as McKay presents them) come thick and fast, but when lined up together almost come across as conspiracy theory. Can the same man really be responsible for both ISIS AND Fox News? Can a human being have the same fondness for waterboarding as they do sweet pastries?

In addition, a post-credits scene verges on insulting the audience after two hours spent spoon-feeding gallons of context. The main message is, all this happened while we were too busy being distracted by something else. While the idea that someone can't simultaneously care about politics and popular culture feels a bit rich coming from the director of Anchorman, given the current trash fire that the world is right now, he does have a point.

Additional observations
- Steve Carell is woefully miscast as Donald Rumsfeld and the prosthetics are unnecessary and distracting. I remember Rumsfeld's bald-faced lies during the Iraq War but I don't remember him sneaking around the place grinning like Cesar Romero's Joker - Ali

More:  Vice  Adam McKay  Christian Bale  Amy Adams  Steve Carell  Sam Rockwell  Politics
Follow us on Twitter @The_Shiznit for more fun features, film reviews and occasional commentary on what the best type of crisps are.
We are using Patreon to cover our hosting fees. So please consider chucking a few digital pennies our way by clicking on this link. Thanks!