So who is Ice Cube? He's a rapper, actor, macker, got a little problem with the redneck cracker. Though I'm having to take 'macker' on trust as I'm not entirely sure what it means, he certainly wears the first two hats. He's recorded three of the greatest hip-hop albums ever made, with whose uncompromising ghetto reportage I was able to identify closely growing up in Devon, and he can properly bloody act. Now he's produced and co-starred in buddy comedy Ride Along, which is a stone-cold smash US hit, and it's comin' to YO' hood. (That's the last time I'll try to talk street, I promise.)


Rappers should make better actors in general, I always think. The best ones understand storytelling so well already that the transition should be a natural one, plus they can't make an album without peppering it with 30-second scripted interludes that end with someone getting shot. Rap is a narrative art. Why so many of them make such godawful actors, then, I've no idea. Ice Cube was always the exception: you won't see many better debut performances than his in Boyz N The Hood, and he's never been pigeonholed, refusing to eke out the tired repetition of the tragic hood movie again and again.

He can do comedy too, you know. His comic output has included some family-friendly stuff, like Are We There Yet?, but here's more like his natural speed: a buddy cop comedy where he's all tough and mean and shit. It's a straight-man role: he's the immoveable object for Kevin Hart, who has to prove he's worthy of being a cop like him, and marrying Cube's sister. Cube tries to put him off by bringing him on a ride-along (I'm using a hyphen even if they won't) through Atlanta. 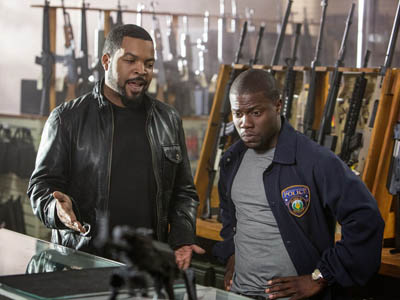 "Did I ever mention what happened to me once upon a time in the projects, yo? Well, since you ask, I damn near had to wreck a ho."


This all reminded me of a couple of other comedies: Meet The Parents, in which the laughs similarly come from a hapless man desperately trying to win over a gruff prospective father-in-law, and Turner And Hooch, whose plot Ride Along follows pretty closely. That Hart is the dog in this comparison shouldn't be construed as a criticism of his performance: he's a naturally likeable and funny onscreen presence, just as he was in Grudge Match, all wisecracking energy and excitable blundering. Cube's role is mainly to stand back and let Hart bounce off him; he knows it, and never oversteps it.

Just as much to Ride Along's credit as its lead performances is an unusually tight script for a Hollywood comedy. There's a current fashion for a lot of looseness and improvisation in the Apatow stable but you see little of this here, other than the odd bit of riffing from Hart. The key beats are established quickly and efficiently, and the story's never sacrificed: everyone's motivation for everything they do is clear throughout, and you'd struggle to trim any fat off it. Hart is shown as an inveterate Call Of Duty player at the start, and the way the writers later drop in elements of its gameplay into his 'real' police work later on is deft and well planned, with an especially good joke about how just finding ammo on the floor is a bit too easy. 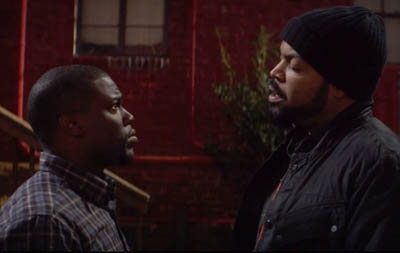 "The girl I was waiting for came out. I said, 'Bitch, I didn't know this was a crack house.'"
"Is this going to take much longer?"


Like the RoboCop remake it's pushing pretty hard against the upper limits of its 12A certificate, particularly given the odd N-bomb here and there, which for me alters the tone pretty drastically, but this is still family entertainment - just about. Whether it's received as such over here remains to be seen: Kevin Hart is a huge stand-up star in the States (his Madison Square Garden special, Let Me Explain, had a cinema release last year and pulled in $32 million at the US box office) but he's less of a mainstream name in the UK, so the foundation's not quite there for a similar smash-and-grab raid on cinemas.

I could very easily be wrong, though: there is a huge amount to like in Ride Along, not least the fact that there are laughs in it every step of the way, and its commercial appeal is obvious. Success, in any case, breeds success, and talk of a huge surprise US hit is usually enough to get a few through the doors. Go on, do Ice Cube a favour and see it. Don't forget, he started this gangsta shit.

More:  Ride Along  Tim Story  Ice Cube  Kevin Hart  John Leguizamo  Bruce McGill  Tika Sumpter  Bryan Callen  Laurence Fishburne
Follow us on Twitter @The_Shiznit for more fun features, film reviews and occasional commentary on what the best type of crisps are.
We are using Patreon to cover our hosting fees. So please consider chucking a few digital pennies our way by clicking on this link. Thanks!